What they're saying: What missing out on LeBron James in free agency means for the Sixers 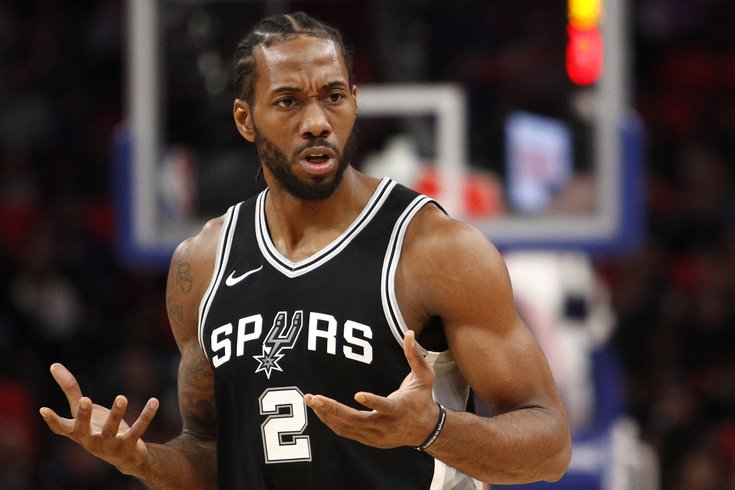 Should the Sixers go all in on San Antonio Spurs forward Kawhi Leonard?

For about 12 hours on Sunday, Philadelphia was in a frenzy as word got out that the Sixers were meeting with LeBron James' representatives in Los Angeles. But, by the time the midsummer sun set across the region, it became clear the NBA's top free agent was not going to sign in Philly, opting instead for a four-year, $154 million deal with the Lakers.

The ripple effect of James' deal — it's less like the result of throwing a stone in a pond and a lot more like the tsunami from "Deep Impact" — will be felt across the NBA landscape, and even more so with the Sixers, who have now seen themselves miss out on the top two free agents (James and Paul George, who re-signed in OKC).

On Monday, they signed JJ Redick to a one-year deal at a much more reasonable price than what he cost them last season, but there's still a lot of work left to be done. And they have some cap space to make it happen.

So, if landing LeBron was Plan A, it's officially time to more on to Plan B. Should that be trading for Kawhi Leonard? Adding more veteran free agents? Let's see what they're saying about the next steps for the Sixers this offseason...

"How much would it cost?" seems to be the big question right now. But, to me, it's more about whether or not it's even worth it, especially for a rental player who basically sat out last season in protest because the team hadn't traded him yet.

Now, all of the “star hunting” attention is turned to Leonard.

The Spurs keep trying to raise the ante for the two-time defensive player of the year, saying that another team is offering more.

ESPN reported on Sunday that besides Embiid and Simmons, the Sixers were saying that Markelle Fultz is untouchable. As a result, the Sixers’ most realistic package to submit to San Antonio could involve Dario Saric, Robert Covington and the Miami Heat’s 2021 unprotected first-round pick. A source noted that it might take additional draft picks.

Yahoo Sports later reported that the Spurs want two players — again, believed to be Saric and Covington — and three future first-round picks. So the Sixers will have to decide if they want to part with two more first-round picks or see if the Spurs will back off those demands.  [philly.com]

LeBron may have helped...

If nothing else, James' early decision allows the Sixers to shift their focus elsewhere. Oh, and his departure from the Eastern Conference certainly helps open things up for the Sixers, who have the second-best odds in the East (behind the Celtics).

Despite the historically low odds of coming out of free agency with a superstar from another team, free agency is not necessarily a fool’s game. By acquiring a player simply with cap space, it’s a super-valuable team-building tool given the low cost. It’s a high-risk, high-reward play. Teams too often overreact to failing to sign superstars. Too often, teams create cap space without having the future commitments or alternatives. It’s what results in situations such as the second most notable trade heist of the century; desperation (and, with it, “optics”) leads to rash decisions. The Sixers, all of a sudden flush with cash with no superstar talent to give it to, will need to avoid this.

The Sixers are very fortunate that LeBron James made his third Decision clear on the first day of free agency. Valuable players remain on the market. The number of teams with cap space, exceptions, and space under the luxury tax threshold are minimal, which gives the Sixers leverage to sign free agents at discount prices. Signing J.J. Redick to a one-year deal at around $12-13 million, which takes up approximately half of the team’s remaining cap space before any other transactions (such as a Jerryd Bayless buyout, waiving of non-guaranteed contracts, etc.) are considered, is a great start to a failed superstar pursuit. It allows the Sixers to continue on what was already an upward path.  [libertyballers.com]

What do you do when a star free agent picks another team over your own?

And this moment should help to fuel the fire for [Ben Simmons, Joel Embiid, Markelle Fultz, Brett Brown, et al].

The Sixers sport two generational talents and loads of roster and salary flexibility. Yet, the best player in the world gave them a cursory glance before taking his crown and establishing another kingdom. It was the type of dismissal LeBron usually saves for chase-down blocks.

The mindset for the Sixers should be a simple one now: Here's to never forgetting July 1, 2018, and making sure LeBron James always regrets it.  [nbcsports.com]

For what it's worth

Remember when I said I was more concerned about whether or not Kawhi was the best use of resources for the Sixers? It appears I'm not the only one...

The true cost of an acquisition often does not come into focus until well down the line. Say, when a team realizes the options it would have to upgrade its roster were it still in possession of the lottery pick it traded away the previous offseason.

True, not every road leads back to the Markelle Fultz deal last spring, but it does stand as a good example of the fallacy of viewing a prospective transaction in zero sum terms. The pertinent question isn’t “Does Player X maximize our competitive chances right now?” It’s “Does Player X better maximize our competitive chances in the aggregate than whatever future Player(s) Y we could acquire with the assets we spend on Player X?”

In other words, the question isn’t whether Leonard makes the Sixers a better team in 2018-19 than Dario Saric, Fultz, and a future draft pick(s) would. The question is whether Leonard is the best way to spend those assets, or if the future might offer some better opportunity to spend those assets in a way that better enhances their chances of winning a title within the next 5-10 years.  [philly.com]

Sixers never really had a shot

With reports out that LeBron informed those close to him on Saturday that he planned on signing in L.A., what was the purpose of the Sixers' meeting with his agent, Rich Paul, on Sunday afternoon?

James' media ventures that include everything from product endorsements to running his own production company take place in Los Angeles. And who better to learn from and help position yourself for a life after hoops than Lakers president Magic Johnson?

On top of that, L.A. has become base for the entire James family in recent years. The family has two homes in California and James' oldest son, LeBron James Jr., has long been rumored to be taking his own talents to basketball powerhouse Sierra Canyon High School in Chatsworth, California.

It all adds up to James bypassing the Sixers for the land of purple and gold. And that's OK. The Sixers still have a bright future, even brighter now he's made the trek out West.  [nbcsports.com]

The writing, it appears, was on the wall...

Before he decided to go to the Lakers, James said he wanted to do what was best for his family. He hinted he was ready to leave the Cavaliers at the end of the 2017-18 season.

"I have no idea at this point. The one thing that I've always done is consider my family, understanding especially where my boys are at this point in their age," the player told reporters after Game 4 of the NBA Finals.

"They were a lot younger the last time I made a decision like this four years ago,” he continued. “I got a teenage boy, a pre-teen and a little girl right now that wasn't around as well. So sitting down and considering everything—my family is a huge part of whatever I've decided to do in my career, and they'll continue to be that.” James added: “So I don't have an answer for you right now as far as that.”  [newsweek.com]