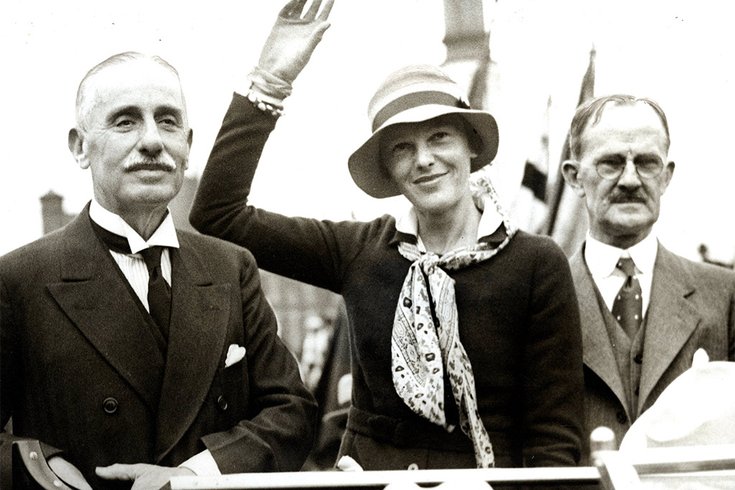 Amelia Earhart smiles and waves to the crowd during a visit to Philadelphia on September 24, 1932. With her are Ellis Gimbel, left, of the department store family, and Philadelphia Mayor J. Hampton Moore, who was presenting an award to the legendary aviator. A banquet and parade were held in her honor.

This week, women pilots from around the globe are gathering in Philadelphia for the Ninety-Nines international conference.

Since its founding in 1929, the organization has advocated on behalf of women in aviation, a field long dominated by men. Some of the world’s most famous pilots have been members, including its first president, Amelia Earhart. An aviation trailblazer and media savvy pop icon, Earhart was a perfect leadership fit for the nascent Ninety-Nines as it sought to break gender barriers and encourage young women to become pilots.

By the time she became the Ninety-Nines’ president in 1931, Earhart was already a household name. In 1922, she broke the world altitude record for women by ascending to 14,000 feet. In another major first, she became the first woman to fly over the Atlantic Ocean, albeit as a passenger. Flying aboard an aircraft named Friendship, Earhart joined pilots Wilmer Stultz and Louis Gordon on their 1928 trans-Atlantic journey.

Earhart found the event and her participation in it unremarkable. Ruminating on the voyage, she claimed that she “was just baggage, like a sack of potatoes.” She resolved to pilot such a journey herself. On May 20, 1932 — it was the fifth anniversary of Charles Lindbergh’s historic solo flight to Europe — she did just that, completing a 15-hour trip from Newfoundland to Northern Ireland to become the first woman to pilot an aircraft over the Atlantic and only the second person to make such a flight alone and nonstop.

Her international fame skyrocketed. She received awards from President Herbert Hoover and the French government. The city of Philadelphia, too, honored the groundbreaking pilot, rolling out the red carpet for a massive celebration in the fall of 1932.

Philadelphia Mayor Joseph Hampton Moore designated Earhart “outstanding woman of the year” and presented her with the Gimbel medal, emblazoned with Philadelphia’s coat of arms and a tribute to its recipient. The city threw a massive parade, attracting Philadelphians interested in catching a glimpse of the internationally renowned pilot.

Earhart went on to accomplish much more: she flew nonstop across the United States, becoming the first woman to do so. She also became the first person to cross the stretch of the Pacific Ocean from California to Honolulu.

Though she relinquished her role as president of the Ninety-Nines in 1933, she remained active in the organization until her tragic disappearance in July 1937.

The photos below of Earhart's visit to the city, and Camden, from the Philadelphia Record newspaper, were provided by the Historical Society of Pennsylvania. The final photo shows members of the Ninety-Nines visiting the city in 1941. 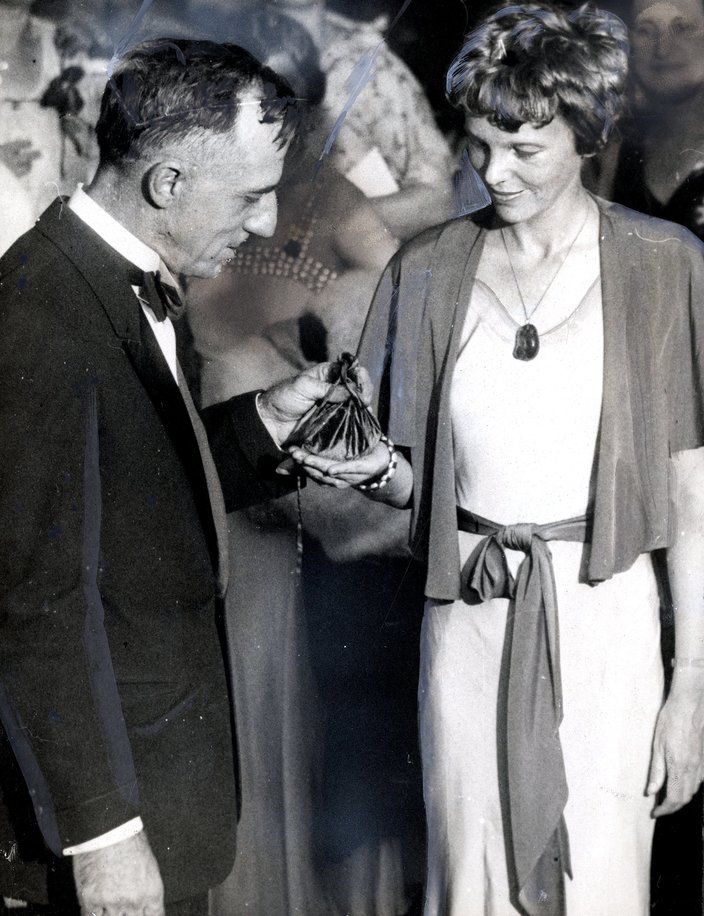 “Air’s First Lady Wins Award”: Amelia Earhart with General Smedley D. Butler, during her 1932 visit to Philadelphia. Butler, a West Chester native, was a United States Marine Corps major general, the highest rank authorized at that time, and at the time of his death in 1940 the most decorated Marine in U.S. history. 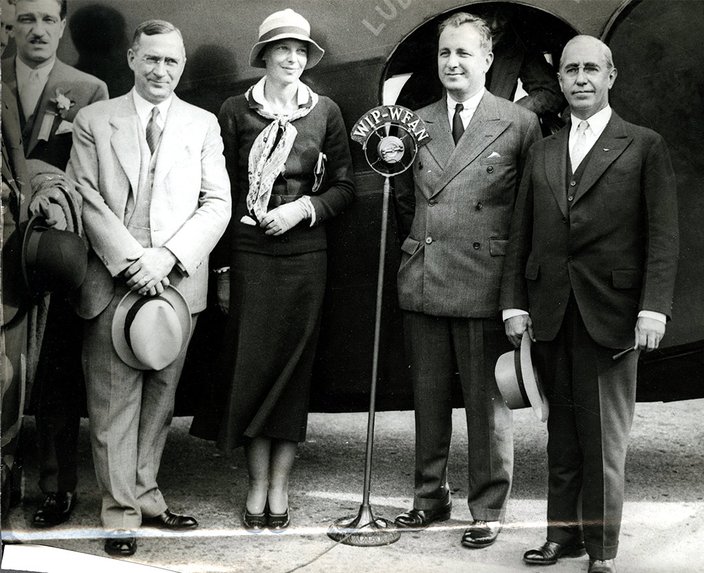 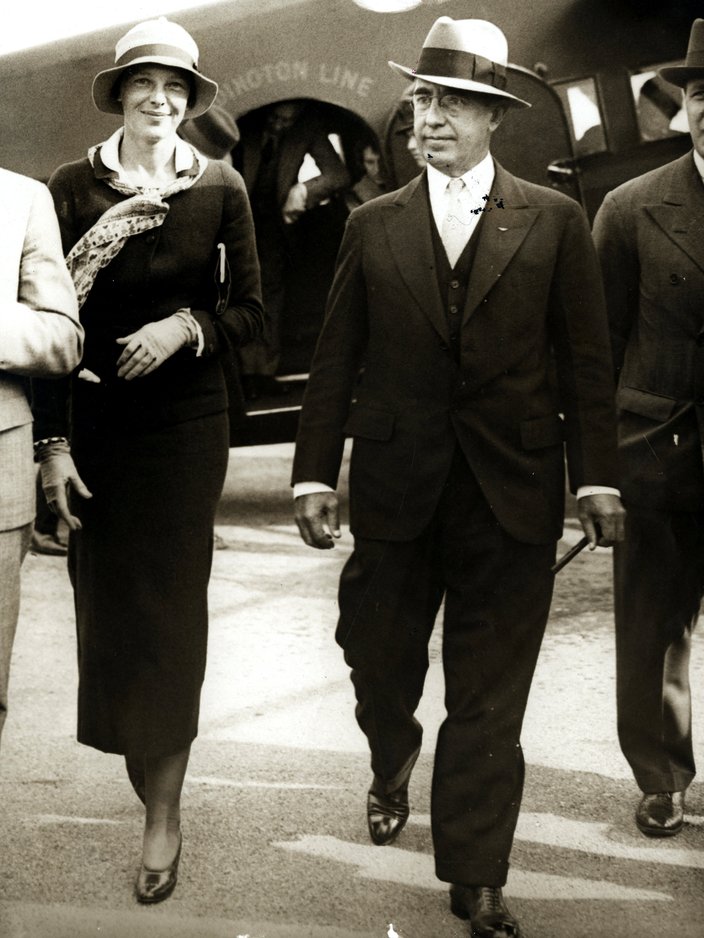 Amelia Earhart with Joseph Dodge at Camden’s Central Airport in 1932. 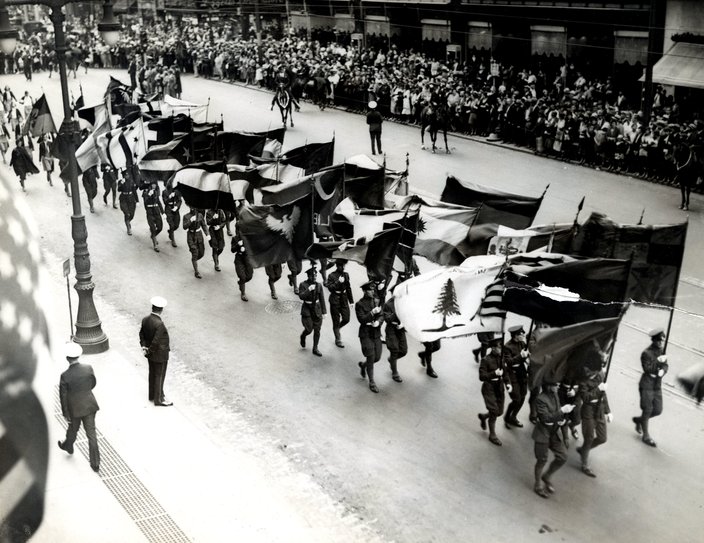 Philadelphians held a parade to honor Amelia Earhart for her history-making solo journey across the Atlantic Ocean. 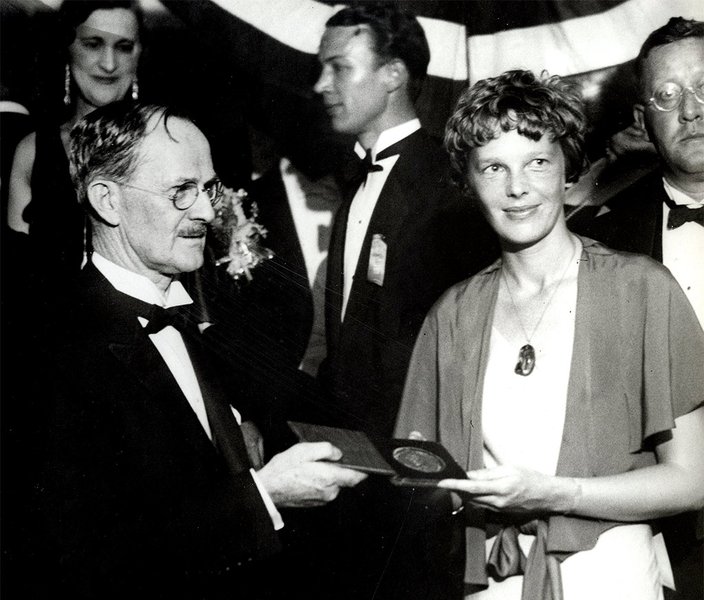 Ellis Gimbel, left, and Amelia Earhart during the September 1932 commemoration festivities in Philadelphia. 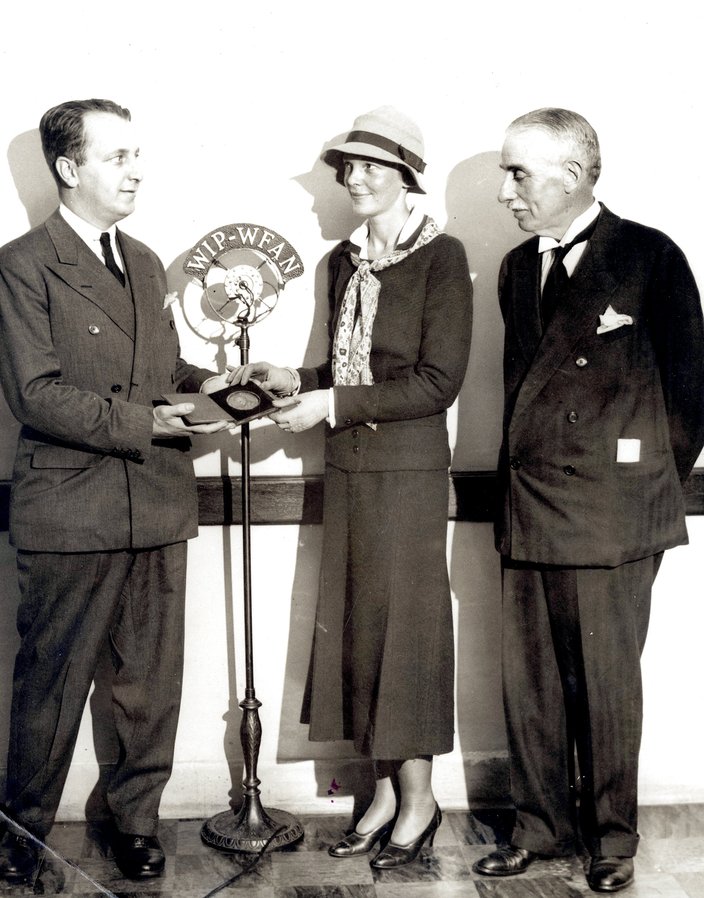 Richard Gimbel, left, presents the Gimbel medal to Amelia Earhart on September 24, 1932. Ellis Gimbel is at right. The front of the medal featured a bust of the aviator and the following text to commemorate her feat: “FIRST WOMAN IN THE WORLD TO FLY ALONE ACROSS THE ATLANTIC OCEAN MAY 21, 1932 AMELIA EARHART.” 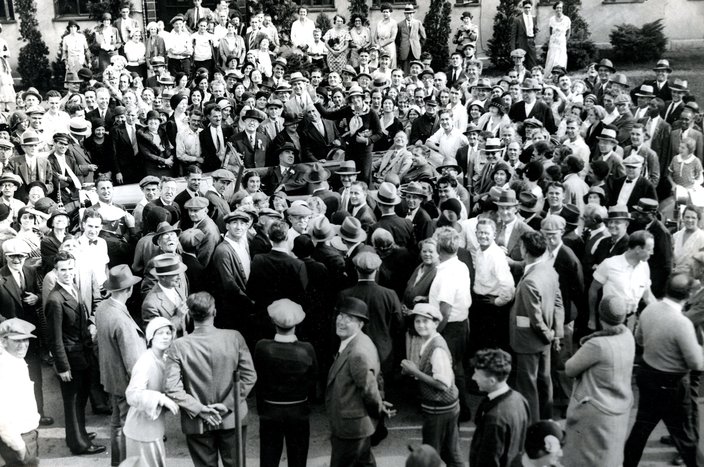 Amelia Earhart appears in the crowd at the Central Airport in Camden during her 1932 visit to the Philadelphia region. 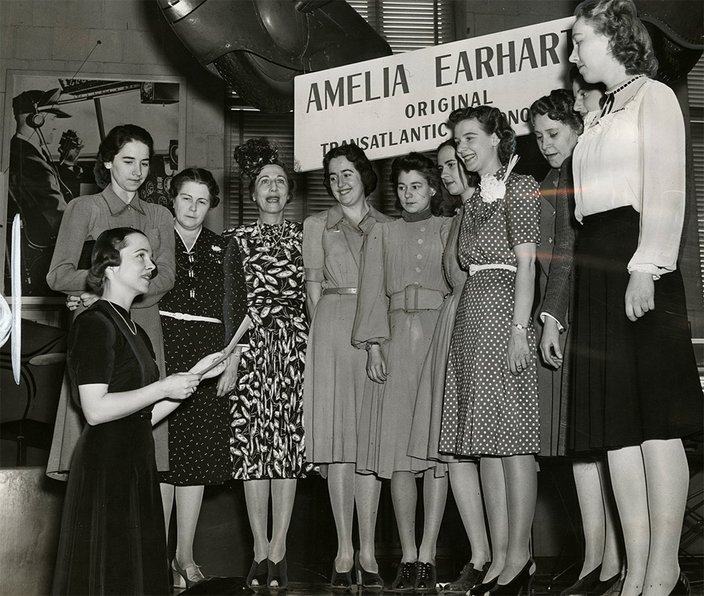 Members of the Ninety-Nines gather at the Franklin Institute in 1941. The Ninety-Nines were founded in 1929 on Long Island, N.Y., and Amelia Earhart was the group's first president. The organization selected the name “Ninety-Nines” to represent the 99 charter members.

Patrick Glennon is a communications officer at the Historical Society of Pennsylvania.