Where do fans of other NFL teams watch games in Philly?

Philadelphia is mostly an Eagles town, with these few exceptions 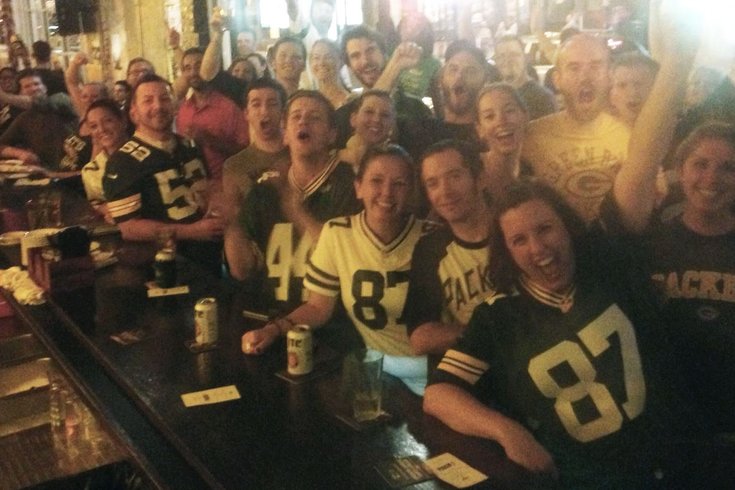 Every Sunday at Milkboy, Packers fans come out in force.

Everyone knows that Philadelphia is an Eagles town, but there are a few places in the area where fans of other teams meet up and watch games. It’s still nowhere near the likes of New York City, where seemingly every NFL fan base has a bar of its own, but a couple of teams are building small footholds in the area.

First and 10 from the Baltimore 45-yard line. Ben Roethlisberger collects the shotgun snap, takes a five-step drop, moves up in the pocket, and tosses a bomb down the right side of the field. Antonio Brown tracks the flight of the ball and catches it at its highest point between three defenders.

On the first floor of The Churchville Inn, it’s a normal Saturday night. People are eating or casually hanging out at the bar. Once you walk up the steps, you realize the most distinguishing feature of the first floor is that it’s well lit. You realize this because it’s much darker upstairs. The whole second floor is focused on one of nine flat screens, all showing the same game.

Black and white Steeler jerseys dot the room: There are a bunch of Troy Polamalu’s, a few LaMarr Woodley’s, and a lone Heath Miller. After the touchdown to Bryant, a couple of people break out the Terrible Towels that former announcer Myron Cope helped make famous.

Andrew Wallace, who has owned the restaurant and bar for ten years, attributes his Steelers fandom to his father. Originally from the Pittsburgh area, he left his son little room for debate when it came to football fandom.

“When I got old enough to walk and talk, he didn’t really give me a choice,” Wallace said, laughing.

As soon as Wallace initially took over in 2005, he started hanging Steelers memorabilia on the establishment’s walls. Pittsburgh fans in the Philly area took notice and started flocking to the bar on gamedays. It's most crowded on Sundays when the Steelers aren’t on television locally.

“If they’re not on TV, you can’t move.” Wallace said. “People who can usually stay home and watch them come out because we have Sunday Ticket.”

The Churchville Inn, which burned down in 2011 and has since been rebuilt, is not primarily a sports bar. There is a huge selection of craft beers and a band is playing upstairs on a typical Saturday night. Regardless, it has managed to carve out a niche as a haven for Steelers fans stuck in Eagles country.

John Quinn is a 24-year-old Steelers fan that grew up in Langhorne, not far from Churchville. He has a similar story to Wallace. Quinn’s father, Pat, who joined his son at the bar for the playoff game, also hails from the other side of the state.

“In grade school, it was tough,” Quinn said of growing up around all Eagles fans. “But in my opinion, it was never hard to root for the Steelers because they usually had a better team.” Quinn’s right, of course. I just hope he doesn’t expect any sympathy after his team got dominated by their bitter rivals in the playoffs.

Michael Horowitz, a political science professor at Penn, had recently moved to the area when Bernard Pollard crashed into Tom Brady’s knee. He was at a well-known sports bar in Center City watching the game as that hit effectively ended the New England Patriots’ 2008 season in Week 1. Horowitz quickly decided he needed to find a new spot to watch the Pats after most of the bar started cheering as Brady limped off the field with a torn ACL.

After doing some quick Internet research, Horowitz was pointed in the direction of Smiths Restaurant & Bar in Center City. While there were only a couple of other Pats fans at the bar, the Lexington, Massachusetts native knew there wasn’t an obvious place in the city to watch any team but the Eagles.

A group of five grew to ten by the next season, around which time an email list was created. According to Horowitz, there are currently around 100 people on that email list. Smiths allows the group to set up at the whole lower bar and attendance varies from 25 (Sunday or Monday night games), to 40-50 (1 p.m. games), to 60+ (a number Horowitz estimates for tomorrow’s game against Baltimore). 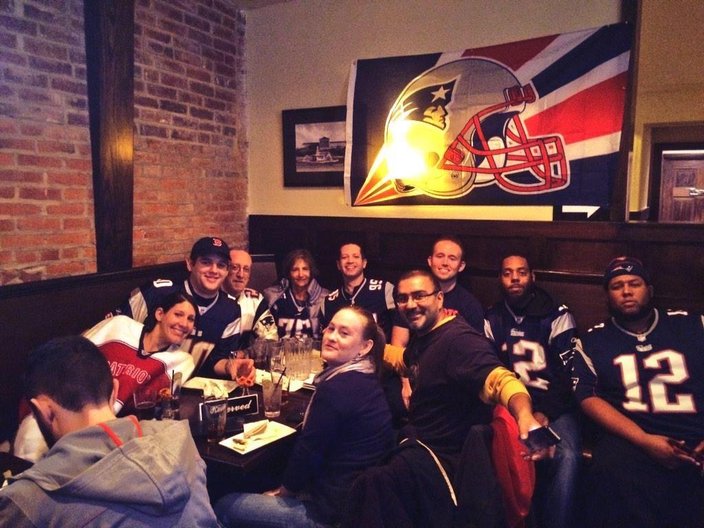 Just like Philadelphia, New England is a very provincial place. “I tell my Boston friends that Philly is Boston with straighter streets and better food,” Horowitz said. The Smiths group changes from year to year with transplants moving in and out the city, but it’s a far cry from the Cleveland Browns bar Horowitz found it as.

Pack fans find place of their own

"Green Bay Packers Phans in Philly" is a Facebook page that was started by MLB.com Phillies writer Todd Zolecki around 2010, the year the Packers won the Super Bowl. After that season, the page caught the attention of Matt Mangan. He was already part of a group of Wisconsinites that bounced from bar to bar every week to watch the Pack game.

Shortly after, the group started watching Green Bay games at MilkBoy in Market East and attendance has ballooned ever since. According to Mangan, close to 200 people filled MilkBoy for last year’s wild-card round playoff game against the San Francisco 49ers.

“It got to a point where people couldn’t get inside, like there was no more room to watch,” he said. On Sunday, Mangan will have to show up at the bar by 11 a.m. in order to ensure a seat.

This year, even some celebrities have showed up for a game. 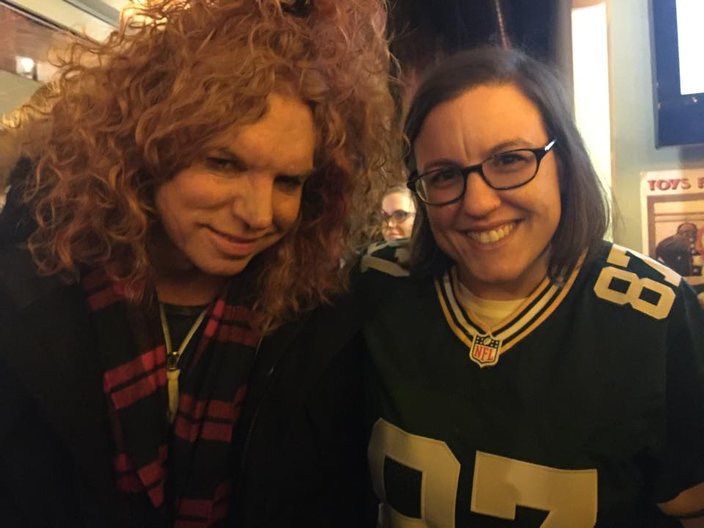 Some of the Packer faithful at MilkBoy don’t even live around Philly.

Mangan, who works in the corporate offices of Urban Outfitters, has seen the Packers group take a life of it’s own.

“Now there’s so many people that show up on Sundays that we’re just spectators, which is sort of what we wanted,” he said. “We just wanted to create a space where we all could watch the game and be around likeminded people.”

Where are the Cowboys fans?

Like every Eagles fan, I loathe the Dallas Cowboys. What particularly irks me about them is that even in a part of the country where Jerry Jones, Tony Romo, etc. are the sworn enemy, there are still an alarming number of Cowboys fans.

Sadly, Chris Christie is not alone.

Even though a number of Cowboys fans are in Philly, they don’t seem to watch the games in public. If there is a place where they all congregate to watch football in the area, it’s not advertised very well. All things considered, probably the smart move.

For the Cowboys-Lions game, I decided to stop by Field House, a popular sports bar in Market East. Make no mistake: Field House is not a Dallas Cowboys bar, but it did seem like a place where some Cowboys fans might want to watch the game. I was in luck. There were about 20 people cheering for Dallas scattered throughout the bar, but they clearly didn’t come together in a coordinated effort.

Todd Worsham, who was born in Dallas but now lives in Delaware County, goes to bars all over the city to watch the Cowboys.

“There’s usually Cowboys fans everywhere,” Worsham said. “There always seems to be at least one.”

On this day at Field House, only one person is wearing Cowboys gear. It’s a woman from Los Angeles who is vacationing on the East Coast, which makes quite a bit of sense. On gamedays, Cowboys fans that live in Philadelphia don’t appear to like to make themselves known.