How do the mayoral candidates rank on social media? 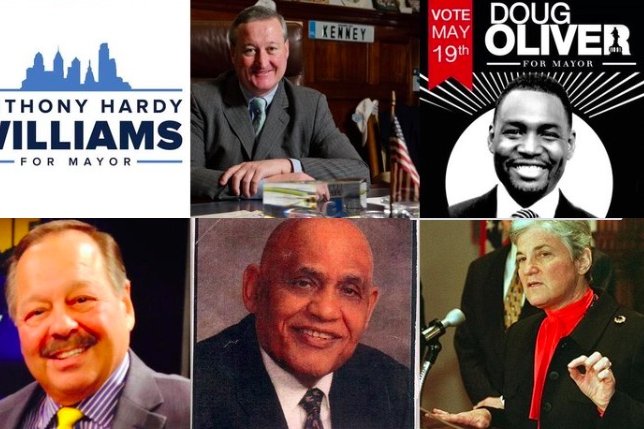 As a candidate and a president Barack Obama has collected more than his fair share of critics, but in one respect, he's gotten near universal acclaim: his use of social media during his successful 2008 run for president.

Since then, politicians of all stripes have taken to Twitter, Facebook and other online platforms to get their campaign message across. Naheed Nenshi became mayor of Calgary, Alberta, in some ways for not just using social media but using it correctly. Some scholars even believe social media will soon become a semi-accurate way of polling. If nothing else, we know that social media usage among adults is on the rise.

So where do the candidates in Philadelphia's 2015 mayoral race stand on two of the major platforms: Twitter and Facebook? Judging by amounts of likes and follows, generally accepted guidelines for effective social media practices, and simple aesthetics, here's how they rank, from least to most savvy:

Twitter - None
Facebook - 156 Likes
Her Facebook page follows all the general guidelines for posting effectively, something we'll delve into later. Also, by simply not being downright confusing she probably deserves to be ahead of  Milton Street. However, when you're the lone Republican candidate in a city that hasn't elected a GOP executive since 1948, you're going to have to do more than this current effort to be listed higher.

Twitter - 50 Followers
Facebook - Unclear
It's safe to say that Street's social media presence is nearly invisible at worst, and confusing at best. He apparently abandoned the Twitter handle @Street4Mayor after his unsuccessful 2011 bid for the office, replacing it with @TMiltonStreet. With 50 followers, it appears that the account is run by Street exclusively without a social media manager, as it's scattered with updates only about every week. Those updates range from what's going on with his grandchildren to most recently links to Facebook videos addressing various campaign issues. In fact, all his tweets are pretty much just links to Facebook:

Facebook is another headache entirely. Street posts, infrequently, on both his personal account and the account for his organization to stop violence in the community, the 414 Movement. 414 has a pretty clean looking website, but it hasn't been updated in nearly a year. Either way, there is no "Street for Mayor" official campaign page like there was in 2011 (which wasn't pretty either). Instead, both the 414 page and his personal page are used sporadically for updates on his campaign, with no clear message or cohesive look. What's worse, if your most direct and concise post since the start of the race is deflecting accusations, you're probably not in good shape.

Twitter - 881 Followers
Facebook - 478 Likes
While the "Likes" may not show it, Diaz' campaign is doing a pretty decent job on Facebook. Distinguish yourself from the other candidates on human rights issues? Check. Highlight your involvement in the community? Check. Show that you can have some fun? Check. Diaz gives frequent updates, highlighting his experience and giving an inside look at his campaign trail. One note: You don't need to post an accompanying paragraph if you're linking to a policy proposal. As many marketing studies show, less is more.
His Twitter feed, while not terrible, is a different story. Posting the same video three times in the same day (one, two, three) without intermittent tweets and simply changing the prompt in which you frame it looks lazy, even if that video is your flagship campaign ad. Also, while many understand there is usually a staffer in charge of social media, that doesn't mean you can't at least try and make it look like it's coming from the candidate himself:

Huge thx to everyone who came out for Salsa Night. ICYMI here is a clip of Nelson and his wife Sara cutting a step. http://t.co/6nUDfCItfQ

There's plenty of posts like this, the point being it probably wouldn't hurt to use "me" instead of "Diaz" to give a more personal touch. Making it sound like it's coming straight from the candidate can have lasting effects, a reality emphasized by researchers at Twitter.  Overall, Diaz has a solid presence, but nothing stands out as unique.

Twitter - 502 Followers
Facebook - 1,100 Likes
Despite a strong presence on his official state senator Twitter and Facebook pages, it doesn't look like Williams has been able to garner the same attention on his separate campaign pages. While some research has shown that multiple pages for one "brand" can be positive for a company, it's probably safe to guess that the same trend doesn't carry over for local politicians running for an office while currently holding another.
His Facebook page follows all of the basic rules for getting shares -- use nice pictures, call people to action, etc. His Twitter is hitting the basic notes as well -- such as attempting to create viral content and tagging potentially interested local media outlets:

Twitter - 548 Followers
Facebook - 2,339 Likes
She's currently leading the latest (albeit self-conducted) poll, but Abraham's not much of a force on social media. Abraham's Twitter, like Diaz', constantly gives the third-person perspective. Plus, the campaign updates feel like you're just reading a planner:

Looking forward to a great meeting with @PhillyTrib Editorial Board! #Lynne4Mayor

Moreover, her Facebook page isn't entirely clear about being a campaign site. It's listed as a "politician" page, with a cover photo of the Philadelphia skyline, essentially devoid of any "Abraham for Mayor" logo or branding. Instead, it's hidden in the "about" section. The third-place ranking is based on her amount of Facebook likes, but there's really not much to see here.

Twitter - 1,201 Followers
Facebook - 2,590 Likes
Oliver's the youngest of the candidates, and it shows. When your campaign is clever enough to have other people tweeting your content, that's always a good sign, with the most notable example being the internal poll he "conducted" to poke fun at the Abraham campaign. Both his Twitter and Facebook accounts follow all the previously outlined good habits, with some celebrity endorsements thrown in:

Oliver's taking all the right steps on both platforms. It just remains to be seen if that translates to votes.

Twitter - 6,576 Followers
Facebook - 2,614 Likes
The undisputed winner among the candidates on Twitter, Kenney notes that staff tweets are the exception, not the rule, on his page:

He's engaging, and often pretty hilarious, while never backing down from an interaction with constituents:

.@aka_el_jefe What do you think teachers, firefighters & sanitation workers are? The mayor fights 4 everyone even grumps like you #AskKenney

His Facebook page is missing some of the immediate "this is a campaign" indicators that also plague Abraham's page, but makes up for it with stuff like this: 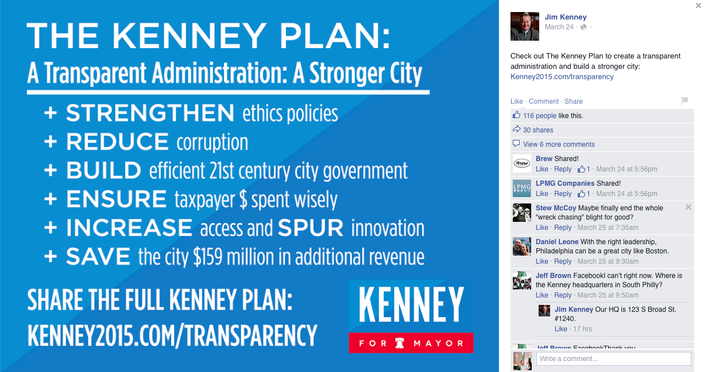 Now that is a plan that you can at least understand while casually scrolling on your phone. Plus, look at that quick response in the comments when a user asked where the campaign headquarters are. Kenney is king, and it's not even close.