Republicans are gathering in Cleveland this week, as will Democrats in Philadelphia next week, to formally nominate their respective Presidential candidates.

The national conventions took on presumptive forgone-conclusion status weeks, if not months, ago. America already (almost) knows Donald Trump and Hillary Clinton will face off in November.

While Clinton was long the favorite in her race, Trump’s rise to the top was deemed a longshot. What drove that rise will be studied for years to come, regardless of the outcome, but one thing it highlighted were problems with traditional means of polling.

See some of PredictIt's unexpected side bets here!

With landlines approaching VCR status, pollsters face heightened challenges to get the data they need. Maybe that led to pollsters missing Trump's upward trajectory, or maybe it didn't. But a new wrinkle in the political-prognostication game has been the entrance of websites like PredictIt.org, a self-described “real-money political prediction market; the stock market for politics.”

It’s part academic-research project and part unique way to invest (or wager, depending on your outlook) real money in political races across the country.

"Markets are highly accurate because people have self-interest in their [answers]. They’re putting their money where their mouth is." – John Phillips, CEO, Aristotle Inc.

“PredictIt is an exciting new, real money site that tests your knowledge of political and financial events by letting you make and trade predictions on the future,” explains the site itself. “Although the stakes are limited, PredictIt involves real money so the consequences of being wrong can be painful. Of course, winning can also be extra sweet.”

As of Friday afternoon, traders on the site gave Democrats a 66 percent chance of winning the White House in November. While pollsters, in many case, seek information about who people will vote for, markets like PredictIt base their stats on who users think will win.

To John Phillips – CEO of the non-partisan political-technology company called Aristotle Inc., which is involved in PredictIt – that’s a defining difference between polls and markets like this. 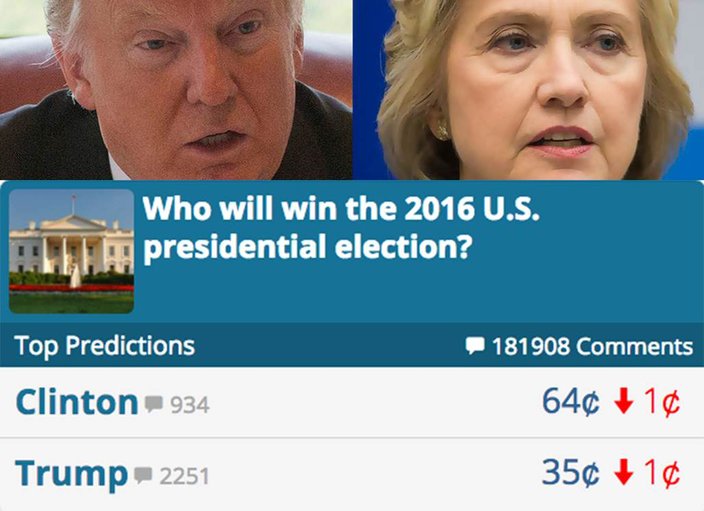 “We’re forecasting with what people believe the answer will be, and have skin in the game. Markets are highly accurate because people have self-interest in their [answers]. They’re putting their money where their mouth is,” Phillips told PhillyVoice during an interview last week. “Polling has been around for a while, and it’s very good with focus groups, to understand the why behind what people are forecasting, something that markets aren’t very good at telling you.”

Take last week’s announcement that Trump selected Indiana Gov. Mike Pence as his running mate. Before that news broke, PredictIt traders read the tea leaves and were investing on Pence while sending Newt Gingrich’s numbers down.

Phillips explained that it’s essentially a “stock market for politics,” as opposed to the political version of a Las Vegas sports book. Users settle on a price between 1 and 99 and whomever gets the correct answer gets the full dollar. (There’s an $850 maximum wager for PredictIt).

With that 66 percent Democratic advantage to win the White House, should someone buy in and say the GOP will win, they’ll invest 34 cents to win the dollar.

“It’s a lot of fun, especially if you’re into politics,” said Phillips, noting that users skew younger, male and starting off with a modest investment. “In the prediction market, the more information you have, the better you can do.”

While the UK’s Brexit vote was an unexpected aberration, Phillips said “the market has been quite accurate this year.” 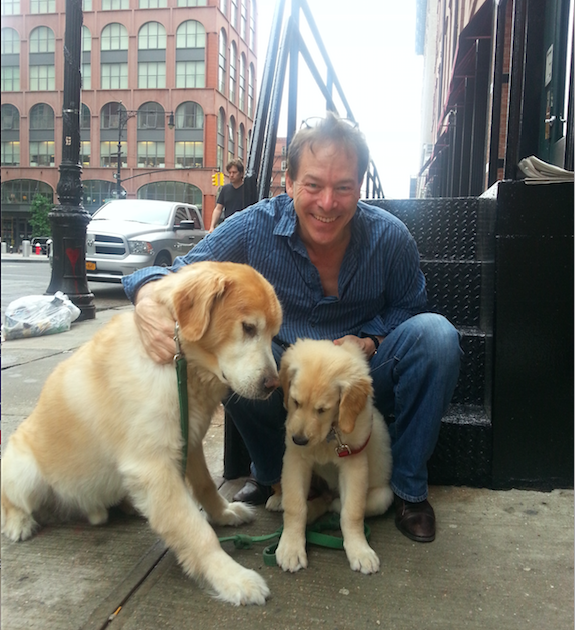 John Aristotle Phillips, CEO of Aristotle Inc., is closely involved with a website called PredictIt, which allows users to invest (or wager) up to $850 on political campaigns and happenings across the country. He also likes hanging out on his NYC stoop with dogs Snoop and Lucky.

While Trump was a longshot initially – seen at the time as “a Black Swan event” – the market caught up as the primaries evolved. Moreso than answering a call from a pollster, this provides a mechanism through which voters can play closer attention to the candidates and the issues.

As the initiative started as a Victoria University of Wellington research project, and is legal to bet upon thanks to a "No Action Letter" from the U.S. Commodity Futures Trading Commission, academics from more than 50 institutions will have access to data and gauge the ways that markets can forecast future events.

“Political scientists. Statisticians. Business schools. Mathematics departments. They’ll be looking at why people forecast the way they do, whether right or wrong,” he said. “Polling could transition into something like this. Markets measure things no one has the time, money or inclination to measure. There will be a lot of information in there to research.”

As for what the PredictIt markets are saying now, users expect Clinton to win the Presidency (65/35), Virginia Sen. Tim Kaine to be her vice-presidential running mate (49), and Democratic challenger Katie McGinty with a slight lead over incumbent U.S. Sen. Pat Toomey (52/50) in Pennsylvania.