Why Philly should back Donald Trump for president 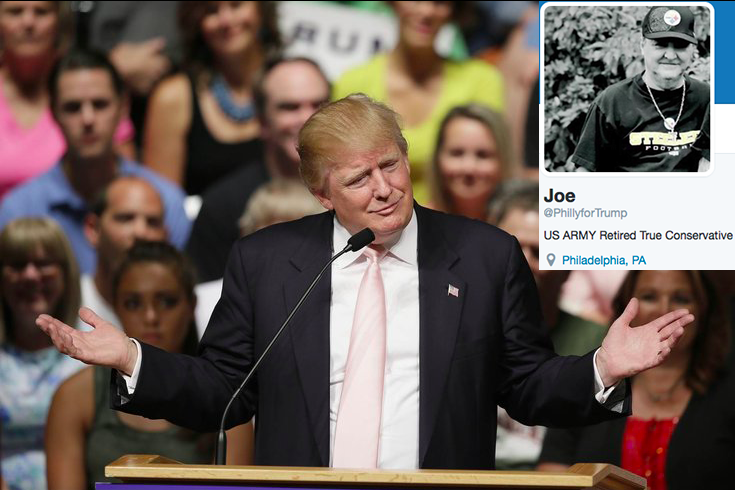 Republican Presidential Candidate Donald Trump, shown at a debate, is the preferred next leader of a South Philly man who has taken his views to Twitter.

You probably already have a hunch that he’s expected to fare well among Pennsylvania Republicans, with FiveThirtyEight’s projected 13-point polling lead over Marco Rubio serving as validation.

Yet, with voters heading to polls or caucuses across the vast majority of America before Pennsylvania’s primary on April 26, campaign events (and rhetoric) haven’t really yet heated up locally.

A cursory search online didn’t turn up many pro-Trump groups in Philly. Despite Penn For Trump’s dismantling, numbers crunchers found pockets of support in the Riverwards and Northeast Philadelphia.

There is, however, a nascent @PhillyForTrump Twitter account which activated its mission just two weeks ago with a flurry of pro-Trump retweets followed by basic commentary on others’ posts.

From there, Joe Tesauro – a “US ARMY Retired True Conservative” born and raised in South Philly – declared his presence and intentions:

Vote trump the only True Viable Candidate for President ! https://t.co/3jHTGb6qmf

he is for Us we the People will work hard for all of us ! https://t.co/FAjwtpULgC

There isn’t much topical variety on Joe’s Twitter account yet as he remains in the anti-establishment, pro-Trump train, chiding-Jeb camp.

The account also featured a lull in activity leading up to Super Tuesday, when Joe returned to the keyboard with a vengeance.

On Tuesday, we traded tweets and emails in which I extended an invitation for him to try and convince me and, by default, my readers to support Trump in his pursuit of the presidency.

“There are a lot of people who think like I do, and I haven’t gotten any negative feedback since starting the account a couple weeks ago,” he said during a brief phone chat on Tuesday. “Today’s going to be the day he makes his mark. If he doesn’t, we might as well just hand the White House to Hillary.”

We agreed to follow up with a day-after-Super-Tuesday chat. Suffice it to say, I was surprised by what I heard. Pretty sure you will be too. What follows is a lightly edited version of our Q&A.

PhillyVoice: I see that you’ve only been tweeting since mid-February. What prompted you to join and had you ever been on Twitter before?

Joe Tesauro: I never went on any social media before this. As a watcher of CNN, I’d see them talking about their accounts, that you can contact them there, so I thought 'let me make mine up and I went with “Philly For Trump.'”

Since I started using the account, I’ve gotten such a high response from others from around the country, using their states and cities, what have you, for Trump. We go back and forth hitting on points that Donald Trump has done well in, points that he’s made.

Basically, everyone across the country is saying the same thing: We want change, a change in government. It’s been Democrats and Republicans and then independents started hitting the scene as they didn’t want to classify themselves and conservatives or liberals. Now, what we’re seeing happening – especially in the 2016 race – is that political affiliation doesn’t really seem to matter anymore.

What Trump has going is an entire movement; Bernie Sanders is talking about a revolution. Hillary Clinton, I don’t believe that it’s her turn. I don’t believe she should have a turn especially after the Benghazi deal and the emails. I believe something went wrong with the personal server; something went really, really wrong that’s not being brought out to public, that’s being held back for some reason.

I don’t know if it has something to do with [former] President [Bill] Clinton, if they’re trying to smear him again. But he’s basically been the only president that’s done anything good for the country.

PV: That’s surprising to hear. What are your political leanings?

JT: I was a Democrat. He’s the only president who, for eight years, turned a deficit to a surplus. He really knew how to manage the country.

What you have running today is Hillary, who I don’t trust, and Bernie Sanders, who is more of a Socialist than anything, and I don’t want to see [a] socialist running the country. What am I left with? A Republican Party and the 16 candidates they originally had in there, I was not happy with any one of them except for maybe [Mike] Huckabee and the surgeon [Ben Carson] who’s soft-but-well-spoken with good ideas.

PV: Which brings us to Trump.

JT: If Trump did make it all the way, which I think he will, he needs someone good on the political side with good ideas. A cabinet of that. If anybody can do this, he can.

Basically, I’m not happy with [the choices] they’re giving us. With the presidential candidates, there’s not enough there.

I voted for [President] Obama.

JT: Once. The second time, I didn’t. I thought that maybe with the president being a person of color, being the first, he’d do something outstanding, but it just turned out to be the regular norm.

I got a problem with the Senate, the legislature. With a Democratic president in there, a majority rule of Republicans meant no bills can get passed.

We need people in Washington who are going to listen to us, who are going to work on our issues. We’re fighting three wars. That’s a ton of money. I don’t believe we should be in any of them. People are worried about what we’ll look like if we don’t send people to help them. Well, we ain’t got no business there. They’ve been warring for hundreds and hundreds and hundred of years. What good has come of us being there? Hundreds of billions of dollars gone and they’ll fight again as soon as we’re gone. It’s just ridiculous.

PV: Say we’re in line outside the polling place together in November, Joe. What’s your sales pitch to convince me to vote for Trump?

JT: Look at the rest of the bunch of people running. Trump is better than just a politically well-known name. He’s a great business leader. He didn’t get that money not knowing what he was doing. With foreign affairs, he’s worked in so many different countries so I’m sure he knows quite a few people.

PV: How would a President Trump benefit Philadelphia?

JT: With us being a major city with a lot of people out of work, if he can do what he says, we’d possibly get more work coming into the city. He’d get something going where more people can get back to work.

We need an across-the-board minimum wage in every major city across the United States. Seven to $7.50 is not good enough. They need to make it a mandatory $15. I know companies aren’t going to like it, but we need it.

I’m on Social Security, and we’ve had no cost-of-living increase. For four years, it’s been the same. Maybe if you’re working, you don’t notice it, but when you’re on a fixed income, you sure do. It’s a good thing gas prices are so low these days.

PV: What about all the controversial statements he’s made, do they give you any pause?

PV: Building border walls. Banning Muslims. The KKK issue. A nasty relationship with the press. That kind of stuff.

JT: The banning of Muslims did not really bother me. I am not prejudiced, and it’s only for the simple fact that we have borders and people can go and come as they please. We’ve had them here and abroad, people who’ve been radicalized. How are we to know if any of the refugees haven’t been too? These are my thoughts. When Trump says I want to ban Muslims, I think every one less coming into the country right now is one less terroristic threat.

With the wall, jokes have been made about him wanting to make Mexico pay for it. Well, I believe what he says. In trade, they’ve made millions off companies moving there, so split it with us then.

Look at all the work being sent to China and overseas. He wants to bring it back here and if he does, do you know how much work that will bring?

I don’t like [the antagonism with the media] either. The press has been treated unfairly at times but in a presidential election that seems to be the norm because with so many catfights going on between the parties, the press seems to get in the middle of it sometimes.

The David Duke BS really p----- me off. How many times does he have to disavow it? That’s just election b------- to keep asking him about it.

There are a lot of issues I have that Trump has the best answers for.