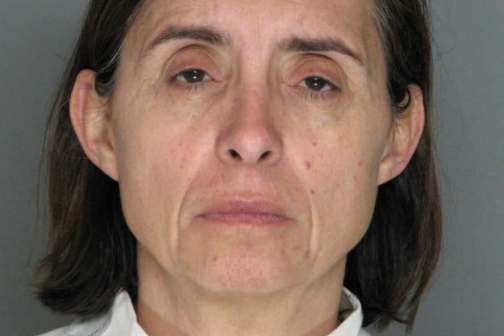 Maria Garcia-Pellon, 54, was convicted of involuntary murder in the 2013 death of her husband, Matt White.

Read More
In February of 2013, Maria Garcia-Pellon stabbed and killed her husband in the middle of the night. The victim, Matt White, had once been a basketball player for the University of Pennsylvania, part of the 1979 team that reached the Final Four in the NCAA Tournament.
Facing up to 25 years in jail, Garcia-Pellon's sentencing took an unusual turn when a Delaware County Court judge decided to put her rehabilitation ahead of her punishment, Philly.com reports.
Garcia-Pellon, previously a teacher's aide in the Wallingford-Swarthmore School District, suffered from schizo-affective disorder, which led her to believe her husband was watching child pornography and also preventing her from exposing a school shooting plot.
With two years already served in county jail, Garcia-Pellon's eventual sentence was crafted to ensure she receives the best course of treatment for her psychological condition.
Delaware County Court Judge Kevin Kelly said he considered the opinions of medical experts, explored what treatments were available in prisons, met with the county's Mental Health Treatment Court probation and parole department, and recognized the support Garcia-Pellon would have within her community and family.
Garcia-Pellon's official sentence is 23 months in jail with another 23 years of probation. She will be transferred to a psychiatric facility, Norristown State Hospital, where she will become eligible for release after 90 days. At that point, she will be required to serve 18 months of electronic home monitoring with monthly blood tests and regular contact with both the Delaware County Adult Probation and the Parole Office's Mental Health Unit. She will live with her daughter, Anna White Garcia, per the court's approval.
Garcia-Pellon and White met in Spain, where White played basketball at the professional level. Throughout the sentencing, White's family supported Garcia-Pellon, who has dealt with mental illness since 2001. The rare unity surrounding the case enabled all sides to advocate for a resolution that would make her treatment the top priority.
Read the full story here.