Will legal ridesharing slay the taxicab industry in Philly? 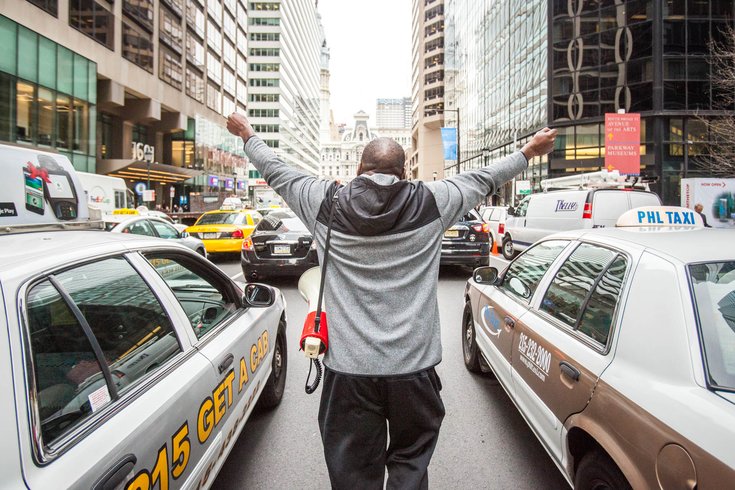 Ronald Blount of the Taxi Workers Alliance of Pennsylvania organizes taxi cabs near City Hall, Wednesday, December 15, 2015 to raise concerns against rideshare services like Uber and Lyft that are becoming more and more popular with commuters in the city.

Pennsylvania Gov. Tom Wolf's impending visit to Philadelphia to sign legislation to legalize ridesharing begs the question: what will it mean for the city's 1,600 taxi drivers?

After years of operating mostly illegally, ridesharing services like Uber and Lyft would get the green light to conduct business free and clear.

According to Ronald Blount, president of the Taxi Workers Alliance of Pennsylvania, the union that represents Philly's taxi drivers, legitimizing ridesharing will lead to a massive influx of new vehicles to be regulated by the Philadelphia Parking Authority. The PPA already regulates taxis.

Contacted Tuesday, a representative for Uber said the service touts about 12,000 drivers in the city, while a Lyft representative simply said they have "thousands" of drivers operating locally.

Blount believes as many as 20,000 vehicles could provide ridesharing services on city streets.

"It's going to be an oversaturation," he said, during an interview Tuesday. "[PPA] will be in control of more vehicles now, but they will only have half the staff [they need]. I don't know how they are going to do it."

A PPA spokesperson did not return call seeking comment on the new law.

But it will not be the death knell for Philly's taxi industry, Blount said.

"Taxi drivers still have some advantages and I don't think that will go away... There's always going to be some of that market left for the cabbies." – Harry Campbell, ridesharing expert

Since Uber and Lyft came to town, they have taken about 40 percent of the taxicab business, according to Blount, who said he's hoping ridership levels will improve, because there are some advantages taxis continue to have over ride sharing services.

Ridesharing expert Harry Campbell, a Los Angeles-based writer who runs The Ride Share Guy blog, agrees that legalization is not likely to destroy the city's taxi industry, especially since Uber and Lyft have been operating, mostly illegally for some time in Philadelphia.

But the industry most definitely began take a hit when ridesharing services first appeared in the city several years ago, said Campbell, who believes any additional loss of taxi ridership will be gradual.

"It won't be devastating, but there will be a gradual loss for cabs," he said.

The biggest impact on taxis could come from businesses embracing ridesharing after having told their employees to avoid them due operating illegally, he said.

But taxis do offer advantages over internet and app-based ride sharing services, Campbell noted.  Most notably, that taxis can be hailed at a moment's notice on many streets in Philadelphia.

Cabs also enjoy the advantage of taxi stands, at major transportation hubs, to allow hurried travelers the chance to get a ride without having to order one up from the internet.

"If you're in the middle of rush hour, in the rain, do you want to get out your phone? A taxi is going to be much more convenient in that situation," he said. "Taxi drivers still have some advantages and I don't think that will go away... There's always going to be some of that market left for the cabbies."

TIME FOR TAXIS TO MODERNIZE

In order to survive in this new marketplace, Campbell said it is time for taxi companies to modernize. Unlike Uber and Lyft, which have slick apps that can be used in most large cities to provide riders with the ability to get a ride on demand, traditional taxi services lack a single app to hail a cab.

An app called "curb," he said, is the closest thing the taxi companies have, but it doesn't offer as widespread coverage.

"Right now, there's no single app for all taxis. It's kind of weird," he said.

Blount said that the PPA's recently relaxed restrictions on taxi companies offers some ability to modernize.

"We need something that allows taxi drivers to morph into something that will allow us to be more competitive " he said. "Now, we have an opportunity to do that."

Taxi drivers also need to work on their customer service if they want to compete in the modern marketplace, Blount said.

"Our customer service has to improve," he said. "We need to help people with their luggage, make sure people are getting into their homes when they are dropped off on a dark street."

In the end, Blount noted that more drivers on the street means more funding for the city's school system. The pending legislation would send 1.4 percent of each fare to the city. Two-thirds of that pool of money would be allocated to the school district, with the remainder going to the PPA.

If the city is going to profit from this, it should go to the children," he said. "And, we have work to do on our side of the street as well. If we can do that, I think both sides will survive."

According to spokeswoman Lauren Hitt, the Kenney "administration is supportive of the legislation, specifically its protections for riders, including the disabled, as well as the additional revenue for the District."