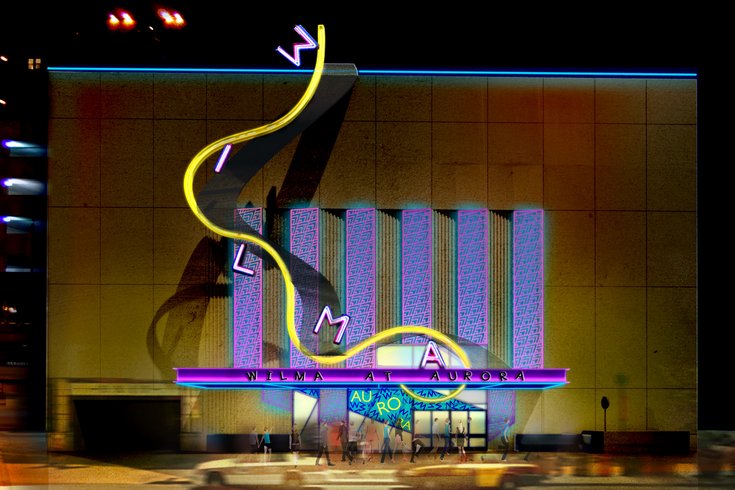 The Wilma Theater's new facade at 265 S. Broad St. will expand on its existing neon aesthetic while changing the building's name to the "Wilma at Aurora."

Fresh off the premiere of Tom Stoppard's "The Hard Problem," the Wilma Theater announced late Monday the creation of the "Transformation Fund," a fundraising campaign with a financial target of $10 million that will develop the theater's lobby into a cafe, redo its neon facade and permanently establish the Wilma HotHouse workshop program the theater piloted in the fall.

Seventy-five percent of that $10 million has been raised, according to a press release issued Monday, with $5 million of those funds accounted for through a lead gift from the Wyncote Foundation, and another $2.5 million derived from funds the theater has raised independently.

Because of its contribution to capital improvements for the Wilma Theater, new signage will rebrand the Wilma Theater on South Broad Street as the Wilma at Aurora, named after Chara Aurora Cooper Haas, mother of the Haas brothers, who encompass part of the foundation's board of directors.

"[We felt] it would be meaningful for us to honor our mother, who was a devoted lover of the arts -- orchestra, opera and theater," Leonard Haas told PhillyVoice. "And in Roman mythology, Aurora is the Goddess of Dawn, and we liked how that definition parallels in a way what the Wilma is going through: a new dawn."

Fighting a 'corporate' approach to theater

By far the most significant change, the founding artistic director of the Wilma, Blanka Zizka, told PhillyVoice, is the launch of the Wilma HotHouse resident acting company, a rigorous in-house workshop program currently consisting of about a dozen union-scale compensated Philadelphia actors, admitted at Zizka's discretion. It test-launched in the fall, with "The Hard Problem" serving as one of the theater's first pieces produced in part by the company.

Think of the HotHouse as an actor's boot camp: members commit to 32 six-hour workshop programs per year, led by "master trainers" brought in from around the world, paid for by the Knight Foundation. Those actors are eventually tasked with being teachers themselves, leading classes open to the broader Philadelphia acting community, as well as launching educational residencies with underserved schools like El Centro and Bartram High School, to name a few. 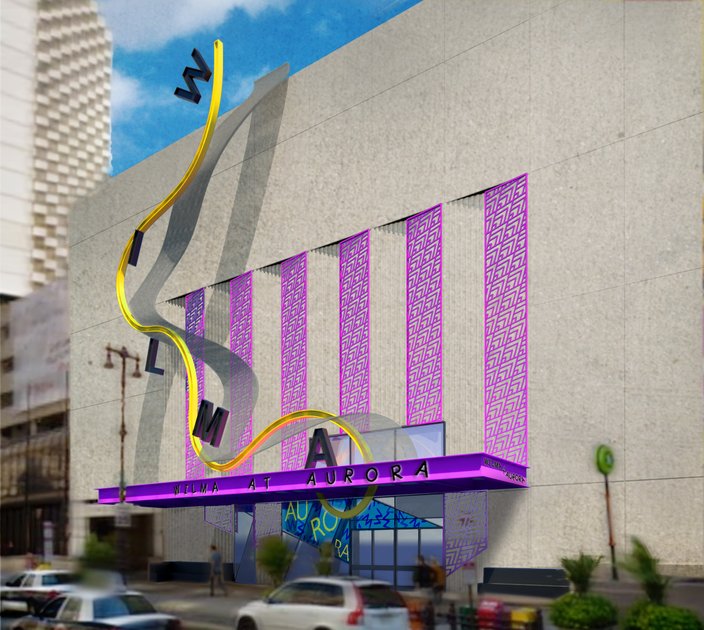 A daytime rendering of the Wilma Theater's new facade.

But in truth, the hope is that the HotHouse will create a new aesthetic for the Wilma that places focus on organic production and long-term growth, rather than, Zizka said, relying on cookie-cutter season strategies that place a lot of emphasis on box office metrics, and not enough on idea-generation.

With the HotHouse, she explained, actors, directors and playwrights are able to work more as a collective, developing new content and technique through their workshop interactions. She described the alternative as a process of constantly putting out specific casting calls for, say, a blonde-haired 22-year-old, who might then be paired with other outside actors, writers and directors they otherwise share nothing in common with.

The HotHouse is a reaction to an emerging "corporate" approach to theater that troubles her.

"About five years ago, I got in a little bit of a crisis with how theater in the United States has been produced; I would compare it to an assembly-line approach," Zizka said. "Everything was about product. It’s almost like a corporate system has invaded the art world, and we have been using their values and measures of values."

What's further resulted from this, she said, is a culture of approaching the art itself as the first target for budget cuts when a production underperforms at the box office, or a grant falls through.

"We can be on Broad Street, and yet every year it’s a struggle about whether we can make it financially," she explained. "So when something didn’t go according to projections, it’s immediately a crisis. ‘What do we cut?’ ... And where you cut from are the things that are flexible, and that’s productions. You take the money from the artists, from the set, or from the workshop."

Which, of course, makes this level of financial support especially significant.

"This kind of fund provides the opportunity to keep on experimenting, and working and focusing on the art without having this sense of constant crisis that if something goes wrong, you have to cut from the heart of the organization."

Zizka: This kind of fund provides the opportunity to keep on experimenting, and working and focusing on the art without having this sense of constant crisis that if something goes wrong, you have to cut from the heart of the organization.

While she acknowledged that changes won't immediately be obvious to audiences, what she hopes to develop through the HotHouse is a group of extensively trained actors who have a thorough understanding of how presence impacts performance -- a mastery of body language.

The idea is to dive deeper with her actors than their current system allows for.

"You cannot experiment without creating a sense of continuity. You have all these new people together, and because you have to unify people first, by the time you do that rehearsals are over," she said. "So in order to experiment with content and form, you have to have a collective that trains together, that has a common language.

"Then we can go further with developing it and doing work that can be exciting."

Creating a space to 'hang out' on Avenue of the Arts

Accompanying the HotHouse, Zizka added, will be the addition of a public cafe in the 2,400-square-foot space that right now serves as a lobby, dressed up with seating and a collection of photos on its purple walls.

"I feel like we have this amazing space there, and it’s just closed. So I want to open it up with this idea of 'low [price] tickets,' and I would like to fill the space with music, and books and have people able to come here and have simple food and great coffee," Zizka said. "So the art students can come here and hang out, and artists can come and hang out."

Designer Jim McGillin, of McGillin Architecture, told PhillyVoice the goal is to create a space that is inviting for patrons at the Kimmel Center and affordable for nearby students from the University of the Arts. The open-air lobby will be cut in half, creating a second-floor space for new management offices and leaving behind a more intimate space for the coffee shop, which will have a fireplace, upholstered chairs and high-top tables. The cafe will have seating for 64, with 40 spots inside and 24 outside.

"The idea is really to pick up on the third-wave coffee shops, taking advantage of the location on the Avenue of the Arts, which is a good place for people to [hang out], whether coming to Wilma or the Kimmel Center," McGillin said. "And then during the day and into the night, it's a gathering place for both artists and the creative class of Philadelphia."

Construction on the cafe will begin in Summer 2017. The Wilma will also seek a liquor license specifically designated for theaters, intended for use during productions.

A new face on South Broad

Rounding out the changes at the Wilma Theater is a new facade, designed by Kristen Robinson, one of the theater's former set designers.

As part of the cafe construction, windows will be reorganized, allowing for Robinson to add colored glass next to an expanded neon entrance sign that, she told PhillyVoice, has always felt like "a party above the porch" when viewing the entrance. She said she felt compelled to preserve that aesthetic as part of the theater's "iconic" look. 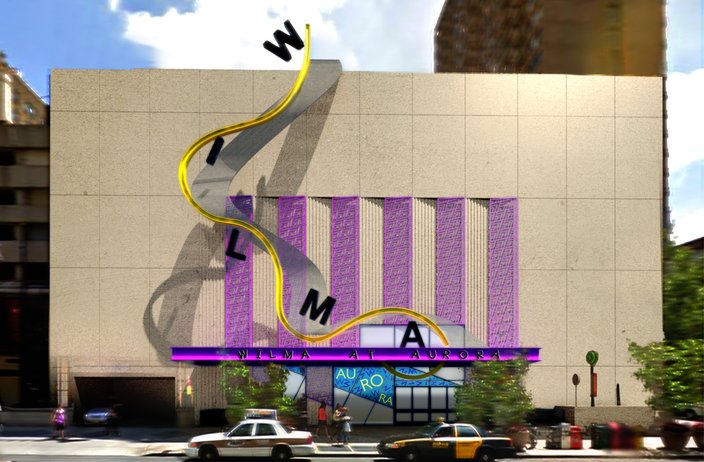 A daytime rendering of the new facade for the Wilma Theater.

Adding Aurora to the name, she said, was a more notable addition to the design of the facade.

"That will have the same sort of whimsical placement as 'Wilma' does above, in the neon that currently exists," she explained. "I think 'Wilma' and 'Aurora' have an intrinsic life to them -- they don’t feel stuck in the ground, and they feel like they dance in the way you pronounce them."

"So, I think that also gave me a feeling of liberty, graphically, when figuring out how to place them.”

That feeling is in addition to a sense of overall freedom to experiment that, she added, she continues to admire about the theater and how it operates.

“You really feel like you have an artistic home when you're there," Robinson said. "There’s great freedom in exploring big ideas, and they embrace that -- it's totally rare, and I think pretty unique.

"The Wilma, they’re home -- they're a place for people to do amazing things.”