Officials say rededication ceremony will be open to community 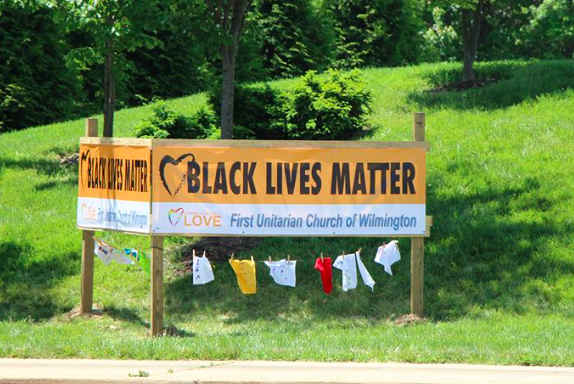 Members of the First Unitarian Church of Wilmington expressed their disappointment Sunday morning after a vandal cut the word "Black" off of a Black Lives Matter banner on the grounds of the church.

At some point overnight Friday into Saturday, the unidentified vandal took a knife to the banner on Concord Pike near Halstead Road.

For much of the past year and beyond, communities across the United States have been striving to come together over differences surrounding racial equality and the effects of bias in police departments. For as many encouraging stories as we've seen, there have also been numerous instances of tragedy, retaliation, disrespect, and willful misunderstanding. In this case, the vandal's message targets the semantics of activism in the Black Lives Matter movement.

In and of itself, this is a difficult statement to repudiate outright without knowing the intentions of the vandal. This and every other spin on the "Lives Matter" phrase is more about making an implication than an attack, and in many scenarios it has been well-meaning if not well-received. Vandalizing a private display of solidarity, however, is problematic regardless of the message.

The full statement posted by the church, which describes itself as a primarily white congregation, is reproduced below:

Members of First Unitarian Church of Wilmington were dismayed and affronted by this weekend’s vandalism of a banner in support of the Black Lives Matter movement that we had displayed on church property along Concord Pike. The word “BLACK” was deliberately cut out of the banner —an anonymous and illegal attempt to silence our prophetic voice. This cowardly act will not prevent us from continuing to speak out about racial justice as a congregation and a religious movement.

First Unitarian Church is a largely white congregation. After considerable study and reflection, we erected these banners not only to state our spiritual commitment to the Black Lives Matter movement, but also to spark a conversation within the community about institutional racism and violence aimed at people of color. The person or persons who vandalized our congregation’s public affirmation of faith were apparently unwilling to have that conversation. Instead, they chose vandalism over dialogue, striking with a knife against our highest principles—the spirit of love and compassion that we are trying to embody as allies of Black Lives Matter.

We deplore all violence. For those of us who believe in the power of love to overcome fear and hate, this has been a difficult summer. With the mass shooting in Orlando, the shooting deaths of black men in Baton Rouge and Minneapolis, and the deplorable targeting of police officers in Dallas and Baton Rouge, we can only reaffirm our commitment to non-violent advocacy and to Black Lives Matter.

We know that there have been some misunderstandings about Black Lives Matter. One of them is that it is an anti-police movement. We do not believe that to be true, and we want to be very clear that our congregation values the work of the police in our community. We recognize that we need police departments to serve and protect our community. We seek changes in police practices and accountability that ensure that black citizens are treated justly and fairly not only by the police but by the whole criminal justice system.

We know that many members of the Wilmington community—especially the faith community—are eager to have honest conversations about race, justice, and the value of black lives in America. In the face of this naked act of vandalism, our congregation will not be deterred from its mission. We invite members of the community to talk with us about their concerns.

Later this summer we will have a ceremony of rededication to which the community will be invited.

The church did not say whether it had contacted police about the incident or plans to search for the person responsible.