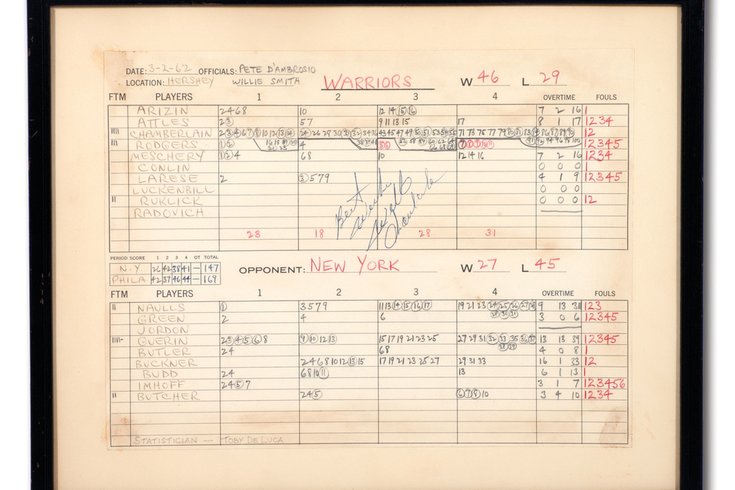 Are you feeling extra basketball-crazed during the Sixers’ current playoff run, and want to own a serious piece of basketball history? Here’s your (pricey) chance.

The home team scoresheet from Wilt Chamberlain’s famed 100-point game in Hershey, Pennsylvania, which he played as a member of the Philadelphia Warriors, is up for auction on SPC Auctions’ website.

Chamberlain, of course, is the only NBA player to ever drop 100 points in a game, 19 clear of the best scoring performance by Lower Merion's Kobe Bryant, which is second best.

The game and Chamberlain's feat have been memorialized by basketball fans everywhere with the classic post-game picture taken March 2, 1962, in which the Warriors center held up the number 100 written on a piece of paper.

You know, this picture:

The game was played in front of just over 4,000 fans, and no video of it exists, which makes any piece of memorabilia from the 100-point game fairly valuable to collectors and fans alike.

The visiting team’s scoresheet sold for more than $100,000 in 2012, according to SPC. This home team scoresheet — written by the Warriors' statistician at the time, Toby DeLuca, who was keeping score for WCAU’s Bill Campbell — includes a signature from Chamberlain himself.

SPC is auctioning off the scoresheet, which measures 11 3/4 inches by 14 5/8 inches, online. The auction is scheduled to last until Saturday at 8 p.m. The bidding, which began at $15,000, has reached $47,084 after 13 bids, but the bids haven’t even met the lot’s reserve price yet, so you can expect that price to rise in a big way before the final bid is placed.

Three years ago, the radio call of Chamberlain's 100-point game entered the Library of Congress.