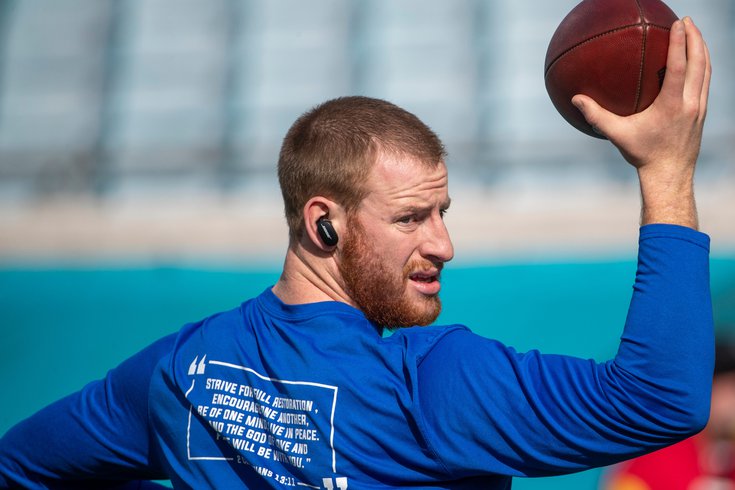 Carson Wentz was traded for the second straight year. Who would have seen that 13 months ago?

Eagles fans are an insatiable bunch. It's hard to say what was more rewarding — seeing Carson Wentz completely collapse this past January, costing the Colts a playoff spot after he already cost them a conditional first round pick — or seeing him traded to the Commanders for essentially two third round picks after the Colts had had enough with him.

Regardless, Wentz is back in the NFC East and Eagles fans will have to see him at least twice a year, just like they'll see Dak Prescott and Daniel Jones. It's a ridiculous confluence of events, and it has resulted in one of the most bizarre trades in a while.

Who won the trade? And who lost, amongst the many effected by it transpiring on Wednesday afternoon?

Not much analysis is needed here other than stating the obvious — it's remarkable that Roseman, just over a year ago, was able to collect a first and third round pick for Wentz. His trade value was pretty terrible. The Eagles took a massive cap hit, to be sure, but 2020 was a terrible year for Wentz that saw him play like the worst starting QB in football and he eventually was benched.

The Colts had a great roster in 2021 and Wentz really just had to manage the game and not try and do too much. He tried to do too much, and as a result Indy had enough after one single season. Last January I myself was in the, "keep Wentz, he's not tradable, he is too talented, let him compete with Jalen Hurts camp." Boy was I wrong. Kudos Howie for making a remarkable trade. We'll see what he does with the 16th overall pick in April.

Washington kind of showed its hand (though it wasn't like they were protecting some secret plan to become competitive right away) when they announced to the world they were going to be ultra aggressive for a quarterback. Aaron Rodgers re-upped with the Packers, Russell Wilson was traded to the Broncos, and Washington was faced with a decision between drafting a QB or bringing in some kind of stopgap.

The Washington front office won't be admitting this, because they hope Wentz can still lead a franchise, but they actually did bring in a stopgap and were somehow talked into paying his entire $28 million salary for 2022. That is insane, and the fact that they paid two third-round picks (and swapped seconds) for the privilege reeks of desperation and perhaps delusion.

We are not going to jump to the conclusion that the Commanders are just going to lay down and die, losing all six of their NFC East matchups because they traded for Wentz. They should have a half decent defense and their new QB will arguably have better wide receivers to throw to now than he did in Indianapolis. But he won't have their stellar offensive line, MVP candidate running back Jonathan Taylor, and a lower pressure situation in the midwest.

He is back on the east coast, in a division that gets a ton of attention, and he'll have to adjust to a new system for the second time in two seasons. NFC East defensive coordinators will be drooling and expecting to create quite a few turnovers.

Reich still has a job in Indianapolis, but he was clearly the reason the front office took a leap and traded so much for Wentz. After all, it was Reich, when he was the Eagles offensive coordinator, who got the best out of Wentz leading up to their eventual Super Bowl title in 2017-18.

He thought he could unlock what it was that made Wentz a near MVP (before his torn ACL) in 2017 and for whatever reason, he was unable to keep Wentz from making stupid mistakes on the field. With a playoff roster in place, Reich was unable to lead his team to success despite having the tools. He went out on a limb for his quarterback pupil and he was left holding the bag when it all went south. Whoever the Colts bring in (probably Jimmy Garoppolo), it will be interesting to see how much slack Reich has if things go south again.

So the Colts lost the initial trade, obviously. But the were able to fleece the desperation mode Commanders for salary relief and for some decent draft picks. Credit them for finding a way to get something for a guy who all signs pointed to them cutting, and for them identifying the need to cut bait before it was too late.