Sister of woman broke leg on jetty trying to assist 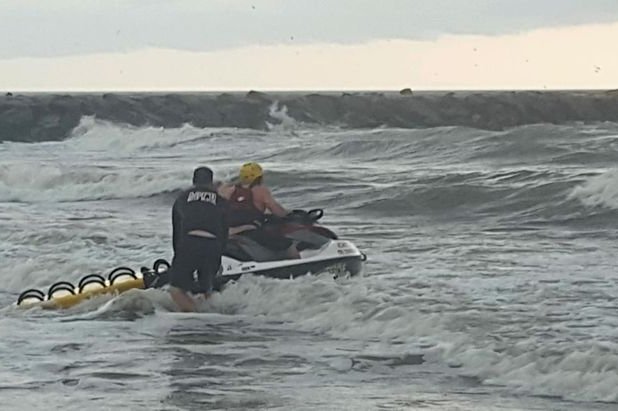 A 21-year old woman was rescued from near drowning Monday evening after guards had gone off-duty. Her sister broke her leg trying to assist, according to officials.

A drowning woman was rescued in the ocean at Atlantic City’s Rhode Island Avenue jetty Monday evening, according to The Press of Atlantic City.

The 21-year-old woman was spotted at 6:08 p.m., just minutes after lifeguards had ended their day.

Lifeguards with the beach patrol were recalled, however, and with members of the fire department used personal watercraft to search for her.

A beach patrol rescue swimmer found her unconscious. She was taken ashore on a personal watercraft.

It was not known how long she was unconscious.

Fire Chief Scott Evans said emergency crews performed CPR on the woman, who was from Pakistan and had only been in America for a few weeks.

The woman had a pulse when she was transported to AtlantiCare Regional Medical Center, City Division.

Atlantic City Beach patrol Chief Steve Downey reported the woman was alive but in critical condition as of 9:20 p.m. Monday.

Winds were up and waves crashing as a severe thunderstorm approached, said the chief.

The woman’s sister broke her leg on the jetty while trying to assist.