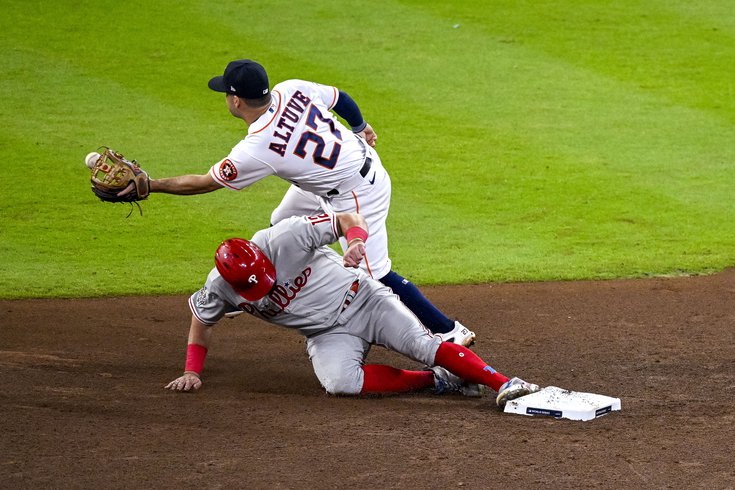 Kyle Schwarber stealing a base in Game 1 of the World Series and getting everyone a free taco.

First came Schwarberfest. Now, Kyle Schwarber has hooked up everyone with a free taco from Taco Bell. Wait, what?

Schwarber stole a base in the seventh inning of Game 1 of the World Series between the Phillies and Astros on Friday. Major League Baseball has a partnership with Taco Bell, the "Steal a Base, Steal a Taco" promotion. When the first stolen base of the World Series occurs, everyone wins a free Doritos Loco Taco.

Schwarber is going from a Philadelphia hero to a national hero for this:

Kyle Schwarber has averaged 3 stolen bases a season over his eight-year big league career, and he said before the game that he was going to swipe the bag that won America free tacos. That is just legendary. pic.twitter.com/5WsD4b7Syw

That marked Schwarber's third stolen base of the this postseason. For an old-school power hitter, he can run a bit!

So, how do you go about getting your free taco? I'll be up front: it's not a simple process. You can't just go walk into a Taco Bell and grab one easily. First, sign up for a Taco Bell rewards account. Next, download the Taco Bell app on your phone. Log in with your account info and you'll see an option on how to redeem the free taco award on the home page: 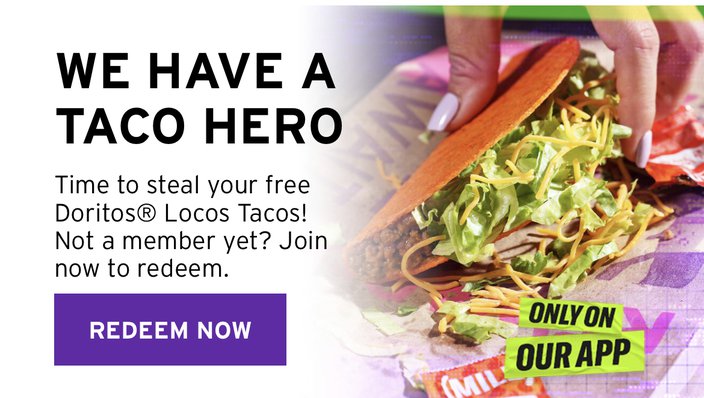 Click on redeem. Head to the "rewards" tab and click on "my rewards." Once there, there will be an option to redeem the taco promotion:

The app was being a little wonky for me, perhaps because I just made an account and am using the app for the first time. If it's not working, maybe sign in and sign out as I did a couple of times before it finally appeared under "my rewards."

Fans have 10 days to redeem the free taco reward.

Once you figure that out, schedule a pick up or delivery through the app and get ready to enjoy that taco. May I suggest the diablo sauce while I'm at it as a topping?