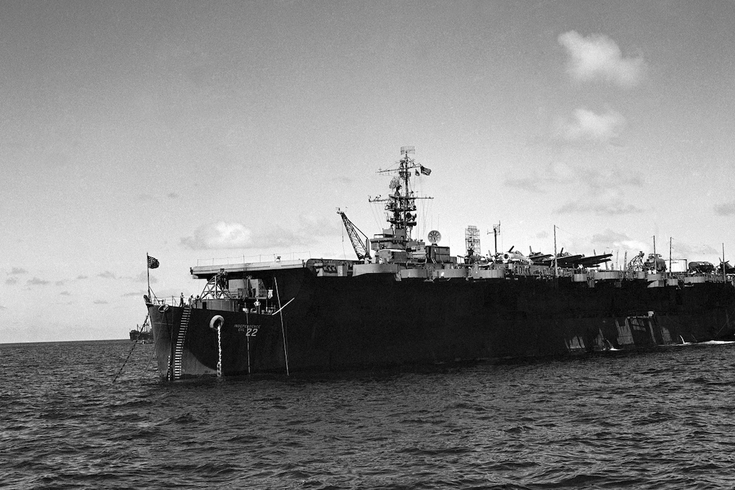 In this July 1946 file photo is the USS Independence near Bikini Atoll. Scientists have rediscovered a mostly intact World War II aircraft carrier the U.S. Navy scuttled off the Northern California coast in 1951..

Despite resting 2,600 feet underwater for 64 years, experts say the USS Independence, scuttled off the coast of California after heavy service in World War II, remains "amazingly intact."
The aircraft carrier Independence (CVL-22) was operated from November 1943 to August 1945 in the central and western Pacific, sustaining damage from shock waves, heat, radiation, and a torpedo attack. It was one of more than 90 mid-size carriers specifically assembled after the attack on Pearl Harbor to conduct atomic bomb tests in the Marshall Islands in 1946.
The vessel was found by the NOAA in the course of a two-year mission to locate historical shipwrecks in the gulf of the Farrallones National Marine Sanctuary and nearby waters, Discovery reports.
Explorers found Independence using a 10,000 lb., 18-foot-long autonomous underwater vehicle called Echo Ranger, surveying the ship using 3-D sonar. They found it upright and potentially stowing a plane inside.

"It is a reminder of the industrial might and skill of the 'greatest generation' that sent not only this ship but their loved ones to war," said James Delgado, the chief scientist on the NOAA mission.

According to the NOAA, Independence is one of some 300 shipwrecks off the coast of San Francisco. The exploration not only revealed the preservation of the carrier, but also the capacity of Boeing's comparatively small Echo Ranger UAV to successfully deploy and survey the site at a lower cost than larger vehicles, according to Wired.
The research is significant beyond the discovery of the ships themselves, as they often contain fuel and oil that can leak contaminants that are environmentally harmful.
While Independence remains in good shape, Delgado said there are no immediate plans to try to enter the vessel.