WWE Clash of Champions 2017: Did AJ Styles defend his title against Jinder Mahal? 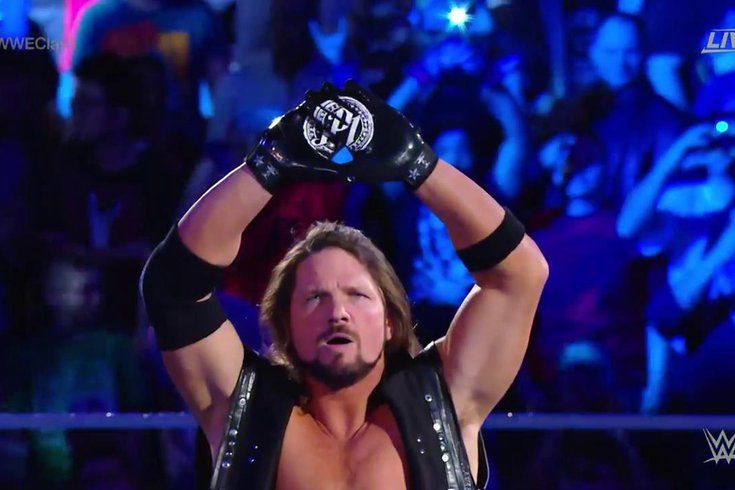 AJ Styles enters the ring ready to defend the WWE Championship at Clash of Champions in Boston.

The SmackDown roster invaded the TD Garden in Boston for their last pay-per-view of 2017, Clash of Champions.

Each title on the brand was up for grabs on Sunday night including a main event worthy tag team match featuring four of the biggest names on SmackDown along with the commissioner and general manager playing referee. Always a good time.

With almost every WWE fan looking forward to the Royal Rumble right here in Philly next month, this is the kind of pay-per-view that could have flown under many peoples’ radars. And WWE looked to end its pay-per-view year with a good showing.

This match featured two guys who would have benefitted from more TV time leading up to this match, which featured two former tag team partners against each other. In wrestling, that’s still a good story to tell. And WWE’s done a poor job in building that, so I guess Rawley and Ryder took it upon themselves to try and build some heat for this match.

For instance, both Rawley and Ryder had promos that were posted on social media only, and weren’t given a good amount of time on TV. These promos did more to build these guys and get them over than anything they’ve done on TV up to this point together.

EXCLUSIVE: "In my 10+ years here in @WWE, I've seen a lot of people come and go. And @MojoRawleyWWE, you just don't have it!" - @ZackRyder #WWEClash pic.twitter.com/zRXZKTxpFJ

Any semblance of this on TV and people are making an effort to watch it. But, unfortunately, these two were relegated to the Kickoff Preshow, which still has a stigma attached to it despite any effort [if at all] to make it seem important each month. It’s just not resonating with fans.

There was some intensity in their match, but nothing that grabbed me. Rawley hit Ryder with a running elbow smash to the head for the win.

Well, that was surprising. Ziggler’s been doing next to nothing for a long, long time on SmackDown. I thought he might get moved to RAW, but WWE kept him on the Tuesday night brand for the long haul, maybe even until his contract expires.

This was a good match with a few good sequences, including one where Roode looked to have outsmarted Corbin and was ready to pin Ziggler to win, but Corbin broke up the pin from the outside of the ring. The last sequence was what got the crowd hot. Corbin was ready to hit the End of Days on Roode, so Ziggler came from behind and as Corbin followed through with the End of Days, Ziggler jumped into the Zig Zag and pinned the champion to win the United States Title.

EXCLUSIVE: "If I give...this company everything I have, then I need to be able to back it up!" - @HEELZiggler is your NEW #USChampion! #WWEClash pic.twitter.com/qpImiqlZUp

This was a rather unique match in which one member of each team was allowed in the ring at once, so having one referee and four bodies in there was different. And, let’s just say that Rusev Day is really becoming one of the hottest acts in the entire company, and keeping Rusev and English as heels seems rather wrong. The Boston crowd, known for its gravitation to heels much like Philly, New York and Chicago, really loved the entire Rusev/English act. And so did I. These guys are great together.

With so many moving parts in this match, it was a welcome change of pace than the usual WWE matches we see. The rule of allowing a member of each team in the ring at once as a legal participant was a neat wrinkle. It played out well in the duration of the match.

I thought for sure the titles would change hands here, but that wasn’t the case. Usos got the win after a splash from the top on Gable.

EXCLUSIVE: The @WWEUsos defeated not one, not two, but THREE tag teams tonight at #WWEClash, and that means they have #SDLive on LOCK! pic.twitter.com/LZkKUr7aKZ

All the women on the SmackDown roster, minus Becky Lynch who is currently filming a movie, were a part of this match. In fact, the babyface Naomi got involved and pummeled Natalya a little bit when she made her way to the outside of the ring at her feet. No disqualification because… well, I’m not sure. Usually, that’s always been a disqualification in Lumberjack Matches.

Later, the heels jumped Flair outside and continued the beating for quite a while. Not enough for the referee to ring the bell, however. During the fracas outside, Carmella teased cashing in her Money in the Bank briefcase (yep, she still has it!), but the brawl from the outside made its way into the ring and then again on the outside on the other side. Flair hit the pile with a moonsault, but Natalya tried to capitalize and put her in the ring to finish her. But that didn’t happen.

Flair eventually locked in the Figure Eight, causing Natalya to tap out. After the match, Natalya cut a semi-weird promo, saying, “You turned your back on me, now I’m turning my back on you!” It seemed like a sort of heel turn promo… but Natalya’s been a heel for quite a long time. We’ll see what stems of this if anything.

Flair gave a passionate promo on Talking Smack after the show.

Rowan and Harper bludgeoned Fandango and Tyler Breeze. Not sure why this was on the main card.

The beginning started slow, which I expected. With so many moving parts in this match, starting it off fast and furious would just tune even the most avid fan out. There were monitors mounted on the near-side ring posts, which screamed out instant replay at the conclusion of the match.

The match quickly delved into a mess. Everyone looked confused, and whether that was the object of the match, it just felt like it wasn’t exactly a *good* thing.

As the match winded down, Orton hit the RKO on Zayn and as he went for the pin, Owens shoved Bryan into McMahon, breaking up the count. The two bickered for a while, and then once Zayn had Orton rolled up for a pin, McMahon counted to two before stopping the count on purpose, blocking Bryan from making any kind of attempt to count. Bryan and McMahon exchanged shoves and words before Zayn rolled up Orton again, but only this time Bryan made a quick three-count while McMahon’s back was turned.

Bryan left, and McMahon sat in the ring in disbelief as Owens and Zayn celebrated on the ramp.

The Singh Brothers accompanied Mahal to the ring for this one, so I guess the whole Mahal-beating-the-heck-out-of-them thing quickly was dismissed. I don’t even like how they tried to explain it on last Tuesday’s SmackDown. It was just ridiculous and pointless.

But it seems as if the reason Mahal got this rematch on the main event of this pay-per-view was to simply get better. He’s improving in the ring and, while not in the upper echelon, could be there eventually. Styles gets a good match out of every single wrestler he works with, and this match was no different.

Styles got rid of the Singhs on the outside, hitting one with a Styles Clash, but took a Kallas from Mahal moments later and almost lost his title. But he kicked out at the 11th hour. Later, he hit a 450 splash on Mahal and eventually locked in the Calf Crusher. Mahal tried to hang on, but had to ultimately tap out as Styles retained his WWE Championship.

• Daniel Bryan took a mini-bump. I have to believe this is WWE’s test run on Bryan being able to handle getting physical in a ring once again. The end goal? Maybe a WrestleMania match.

• Styles vs. Nakamura seems like a very real possibility at either the Royal Rumble or WrestleMania now.

• Charlotte Flair and Becky Lynch is going to happen whenever Lynch is back, and I hope it’s for the SmackDown Women’s Championship.

• Is Dolph Ziggler going to hold onto the United States Championship long? I don’t think anyone expected him to really win, but, hey, it’s wrestling. He could lose it Tuesday night on SmackDown.

• The tag match, despite the confusing rules, was absolutely awesome. I thought it was the best match of the night. I’m surprised The Usos retained, but I have a feeling with Rusev and English gaining so much momentum, they’ll be holding the gold before long.

It’ll be interesting to see how WWE books everyone on this show moving forward as we approach the Royal Rumble, which takes place at the Wells Fargo Center on Sunday, January 28.