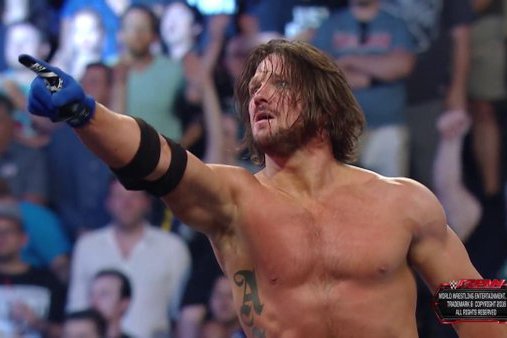 AJ Styles became the No. 1 contender to Roman Reigns’ championship on Monday night.

With a plethora of debuts from the superstars from NXT, Raw hit a home run last night. And the main event had a surprise ending that had a lot of people excited, so let’s get to it.

Vince McMahon started the show by conducting a promo on the stage and said while he worried for his son’s health for a brief moment at WrestleMania as he dove off the top of the Hell in a Cell, he called him a fool, too. He was done running down his son and was about to leave, but some familiar music hit.

Shane came out and thanked the crowd and wanted to shake his father’s hand because Shane’s the only man in the family. That got a pretty good reaction. The crowd continued to chant for Shane to have control of the program, so Vince basically had a fit, walked off stage and said to prove his point about how much his son stinks at running WWE, he’ll let him run Raw.

So, I guess last night’s Hell in a Cell match was for nothing?

Vince left the building in his limousine because he didn’t want to see the show “crash and burn.”

Roman Reigns came out during the 9 o’clock hour to loud boos, but of course, I expected that. The crowd was relentless all night and they showed it in this segment.

Reigns’ first words over the boos were, “Come on, man. I’m not a bad guy. I’m not a good guy. I’m the guy.” The crowd didn’t like that. Chris Jericho’s music hit and he came out and admonished the crowd for being idiots, which resulted in them chanting, “We are idiots!” Love the Raw after WrestleMania every year.

Jericho wants the WWE World Heavyweight Title, but so does AJ Styles, who made his way out to the ring, too. Not long after, Kevin Owens and Sami Zayn joined the fray. Reigns didn’t look impressed with Zayn at all and shooed him away. That’s the ultimate heel move that I’m not sure some people caught.

Shane made a Fatal 4 Way match for the No. 1 contendership to Reign’s title as the main event.

Later in the show, Owens attacked Zayn in a backstage segment and powerbombed him through a table, rendering his spot in the Fatal 4 Way match vacant. But it wouldn’t become a Triple Threat match, because Shane had something else up his sleeve.

The match remained a Fatal 4 Way for the No. 1contendership for the title, and Cesaro made his long anticipated return to ring action as the fourth participant. The four had a great main event match with a lot of near falls and smooth spots. Cesaro’s ridiculous uppercut was missed, as was his big swing.

In a somewhat surprising turn of events, Styles would get the victory after breaking up a Sharpshooter by Cesaro on Jericho and then hitting Jericho with the Styles Clash to become the new No. 1 contender to the WWE World Heavyweight Championship. It’ll be interesting to see the dynamic between Styles and Reigns, because there’s no chance they can keep Reigns the babyface in this upcoming match.

After the show went off the air, Styles got a little emotional.

The new WWE Intercontinental Champion, Zack Ryder, came out and gave a promo thanking his Dad, showed a picture of him holding Razor Ramon’s Intercontinental Title back in the day and then Ramon holding his title Sunday night after Ryder’s huge win.

The Miz came out to crash the party and goaded Ryder into an Intercontinental Championship match. It was the perfect storm. Ryder’s dad was in the front row and Miz confronted him and was met with a shove. Let’s forget that Pops should’ve been escorted from the building after that, but Miz’s wife and former WWE superstar, Maryse, was in the crowd and hopped over the barrier to confront Mr. Ryder. She slapped him and the champion was distracted in the ring, allowing Miz to hit his Skull-Crushing Finale finisher and become the five-time WWE Intercontinental Champion.

Yikes. From Owens to Ryder to Miz. How the mighty title has fallen.

The WWE Women’s Championship was officially presented to Charlotte on Monday night after she won the Triple Threat match at WrestleMania the night before.

Charlotte was rattled by all of the chants coming from the crowd. It was actually humorous because all the women standing in the ring left while Natalya got the mic and got in the ring. Maybe the rest of the ladies were tired of Charlotte flubbing on the mic.

Natalya said she’s given Charlotte some of the most competitive matches she’s had on the main roster and the two wound up tangling, with Natalya hooking the Sharpshooter on the champion.

It was only for a few seconds because Ric Flair helped Charlotte get out of the hold and leave the ring while the two women stared each other down.

The New Day rebounded nicely after taking the loss at WrestleMania at the hands of the League of Nations and then Xavier Woods taking a stunner by Stone Cold Steve Austin. Woods blamed himself for the stunner, which was a good face move. Nobody would be booing Austin in that building on Monday night.

They put the WWE World Tag Team Championship on the line against Sheamus and King Barrett and retained. After the match, the League of Nations attacked Barrett, so he’s as good as gone. He gave his notice to the company a while ago, anyway. But there was another faction that wasn’t ready to fall out of sight.

The Wyatt Family appeared and kicked the tar out of Sheamus, Alberto Del Rio and Rusev. I guess they’re babyfaces now?

The Dudley Boyz defeated The Usos in a Tables Match, but this segment was all about introducing Enzo Amore and Colin Cassady to the main roster with a fantastic promo.

Amore on the mic is gold and Cassady finished up an effective segment to get the new main roster tag team over. It’ll be interesting to see what they do.

Baron Corbin carved a path of devastation and shattered dreams to get to the main roster. At least that’s what he said before his Raw debut against Dolph Ziggler. The two fought to a double countout, but Corbin laid out Ziggler with the End of Days and made a big statement.

Corbin wasn’t the only NXT call up of the night. Apollo Crews made his debut and defeated NXT alum, Tyler Breeze, in a really good match. Breeze continues to make others look good. He’s a modern day Duane Gill.

As for Sasha Banks, who should have also been in the Women’s Championship ceremony, she made quick work of Summer Rae. The Boss isn’t finished with Charlotte yet.

• WWE World Tag Team Championship: The New Day (c) d. Sheamus and King Barrett by pinfall via the Big Ending double team. The League of Nations attacked Barrett after the match, and then were attacked by the Wyatt Family.

• Baron Corbin vs. Dolph Ziggler ended in a double countout. Corbin hit the End of Days on Ziggler outside the ring after the match.

• Tables Match: Dudley Boyz d. The Usos after The Usos tried a top rope splash through the tables but the Dudleys moved.