WWE Raw roundup: Jericho loses to Ambrose, but gains the Money in the Bank briefcase 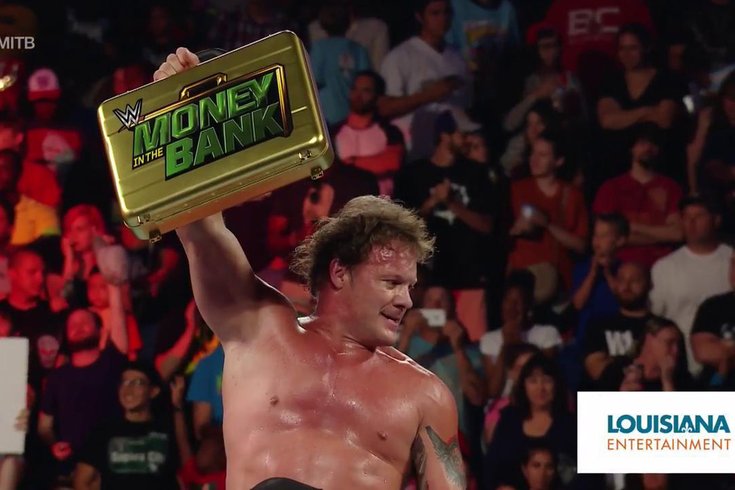 Although not the official Money in the Bank briefcase holder,Chris Jericho made sure the symbolism to end Raw went in his favor on Monday night.

Money in the Bank is less than a week away and Raw on Monday night from the Smoothie King Center in New Orleans was the last chance WWE had to tie up loose ends to a big audience before then. The lineup looked great – a contract signing between John Cena and AJ Styles, an Ambrose Asylum segment featuring the WWE World Heavyweight Champion Roman Reigns and his challenger Seth Rollins, and more Money in the Bank interaction between all six participants in the match on Sunday night – so it was clear WWE really wanted to hammer home the point that this is the biggest Money in the Bank pay-per-view ever. It sure feels that way.

Early Monday, WWE officially announced all 32 participants in the Cruiserweight Classic Tournament that will take place next month exclusively on the WWE Network.

Here are the 32 participants:

Many familiar names and many new names make up the entire roster, so this should be a lot of fun to watch.

As the program began, WWE honored the victims in the terrible tragedy in Orlando on Sunday morning with a moment of silence.

Styles and Cena make it official

John Cena and AJ Styles made their match for this Sunday official with a contract signing. These two have been going at each other with reckless abandon on the mic, and Monday night was no different.

Cena had two contracts lined up, one for a one-on-one match between himself and Styles, and one that would include The Club in Styles’ corner, effectively making it a handicap match. Styles seemed insulted by the notion that Cena didn’t think he could beat him by himself and signed the contract that ensures it’ll be a one-on-one encounter. Styles said that if he was in WWE 15 years ago, Cena never would have become world champion, let alone a two-time Royal Rumble winner. We’re supposed to forget Styles was in WWE for a short time back then because he was just a jobber, so I understand why WWE is ignoring that cup of coffee.

Cena was great during his promo and was probably speaking from the heart when he brought up all the indy wrestling darlings complaining that they’re not in the top spot when they deserve to be. While that certainly might not gain him much in terms of fan support, he’s used to it, so I’m sure he doesn’t care at this point. For his first match since December to be against Styles is absolutely a dream match and he knows it, so he’s gonna bring everything he can on Sunday night.

And I can’t wait.

The Ambrose Asylum reunites The Shield

The Ambrose Asylum was the setting for a Shield reunion on Monday night. For the first hour, WWE really pushed the whole Shield reunion narrative and showed clips of past Raws which included their face turn against Triple H and co. as well as Seth Rollins’ turn on the group.

With all three former members of The Shield in the ring, Rollins gave one of his best promos ever. It was filled with passion and determination that he honestly made me believe he would stop at nothing to regain the title he never lost and walk away from the T-Mobile Arena in Las Vegas as the new WWE World Heavyweight Champion.

He ran down some of the best moments he had together in his career with both Ambrose and Reigns, but he said the best moment he ever had was when he hit both of them with a steel chair and joined The Authority two years ago. Rollins said that Reigns earned the belt, but he never beat him.

Ambrose interrupted, probably because it was his show, and said that neither of them thought about the possibility of him cashing in the Money in the Bank briefcase on either of them if he wins the ladder match earlier in the night. The segment ended with all three getting involved physically with Ambrose standing tall.

Kevin Owens and Alberto Del Rio have had issues in the past, and they cropped up again on Monday night. Owens played tattletale and mentioned that Del Rio showed up late to the arena. With Corporate Kane showing up once again, he seemed to have an idea after Del Rio accused Owens of orchestrating him being detained by airport security. Kane put Owens and Del Rio in a tag team match against the Lucha Dragons, and if they lost, they’d be removed from the Money in the Bank Ladder Match on Sunday and the Lucha Dragons would be in.

That didn’t happen, though. Despite Owens and Del Rio still having their own problems with each other, and almost losing the tag team match after a couple of close calls, the team was able to squeak out a win against the Dragons after Owens hit the Pop-Up Powerbomb on Sin Cara.

In another match featuring the Money in the Bank participants, Sami Zayn defeated Cesaro in a really good match after Zayn hit him with a sunset flip powerbomb to get the win.

And in the main event, Ambrose defeated Chris Jericho in a rematch from last Thursday’s SmackDown. It was almost too easy to predict this one since Jericho defeated Ambrose on Thursday with The Codebreaker, so I would’ve been very surprised if Ambrose didn’t win this match with Dirty Deeds.

After the match, which featured Zayn and Owens on commentary, Del Rio as the guest timekeeper and Cesaro as the guest ring announcer, everyone except Jericho began to brawl at ringside. Jericho, who had just lost, grabbed a ladder and set it up in the middle of the ring, ascending it to grab the Money in the Bank briefcase hanging high above as a symbol of what could happen this Sunday night.

What a night for Ambrose. First, he gets the upper hand on Reigns and Rollins, and then defeats Jericho in the main event.

The WWE World Tag Team Champions opened up the program with a fantastic promo on Kofi Kingston wearing the new Curry 2 Low “Chef Curry” sneakers. The new kicks have been getting roasted from almost everybody in existence, so seeing WWE dabble in some pop culture stuff – funny pop culture stuff at that – was a pleasant experience.

Enzo Amore and Big Cass interrupted the champions, but said they were cool with them. The only thing is they’d be walking out of Money in the Bank as the new WWE World Tag Team Champions. Amore and Xavier Woods almost got into it after Amore insinuated he was with Francesca II Sunday night. Woods wasn’t happy with that at all.

Before the two could come to blows, The Vaudevillains came out and Aiden English put his golden vocals on display for everybody to listen to. It wasn’t long after that Karl Anderson and Luke Gallows came out and told everyone to shut up. He said that winning the titles this Sunday in the Fatal Four Way match would be easier than scoring on the New Orleans Saints.

This led to an eight-man tag team match with the heels getting the upper hand and winning after Gallows and Anderson hit the Magic Killer on Kingston.

Charlotte and Dana Brooke will team up to take on Natalya and Becky Lynch in tag team action at Money in the Bank. Paige got a huge non-title victory over Charlotte, but I’m not sure if it’s just to build the storyline for after Money in the Bank or if it actually means Paige is back on the up and up after wasting away in the women’s division for months.

There already seems to be some divisiveness in the Charlotte/Brooke camp, though.

Shane McMahon told Stephanie he was taking over SmackDown before leaving the arena. I’m not sure if we’re supposed to take that seriously or not, but Monday night’s episode of Raw was the first real tension we’ve seen between both sides.

Rusev attacked Titus O’Neil as he was coming out for a match, so that was the build for Sunday’s United States Championship match. Creative.

Sheamus vs. Apollo Crews was made official for Money in the Bank before Sheamus defeated Zack Ryder with a Brogue Kick. He continued his assault after the match, but Crews came out for the save.

Dolph Ziggler vs. Baron Corbin was also made official for Money in the Bank on Sunday night during the preshow.

I’ll have my Money in the Bank preview posted later this week.

• Non-Title: Paige d. Charlotte © by pinfall via the Ram-Paige.

• Sheamus d. Zack Ryder by pinfall via the Brogue Kick. Sheamus continued attacking Ryder after the match until Apollo Crews made the save.

• Sami Zayn d. Cesaro by pinfall after hitting him with a sunset flip powerbomb.

• Dean Ambrose d. Chris Jericho by pinfall via Dirty Deeds. After the match, all the participants in the Money in the Bank Ladder Match brawled at ringside as Jericho set up a ladder and ascended it to grab the briefcase high above the ring.