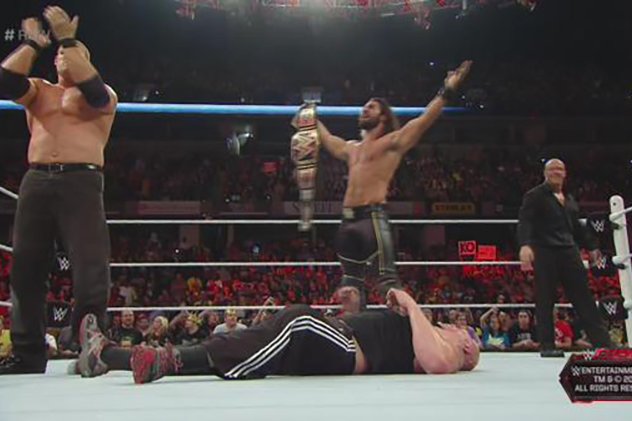 Seth Rollins was able to reunite The Authority and take out Brock Lesnar Monday night.

Bankers Life Fieldhouse in Indianapolis was the site of WWE’s Monday Night Raw this week, and the audience had the distinct pleasure of seeing The Authority reunite. Oh, you didn’t know The Authority disbanded? Well, I’m not sure I did, either. But it sure as hell seemed like it during the course of the program when WWE World Heavyweight Champion, Seth Rollins, tried to reunite the group he alienated completely one week prior. It didn’t look like Rollins’ pandering to J & J Security and Kane was going to work, but they trio pleasantly surprised him.

We also got word that WWE will run its 7/4 live show from Tokyo, Japan on the WWE Network, officially naming it “The Beast in the East.” The show begins at 5:30 a.m. Eastern time, and I’ll be reviewing that huge show right here at The Philly Voice.

And don’t forget, season 6 of Tough Enough debuts tonight on the USA Network at 8 p.m. Who will be the next big thing? Tune in tonight to begin the journey.

Brock Lesnar and Paul Heyman began the program basically explaining why Lesnar had been reinstated by The Authority after being suspended in March. Footage was even shown of Lesnar’s rampage the night after WrestleMania (read the recap of that here). There was one condition remaining to ensure Lesnar would be reinstated for his WWE World Heavyweight Championship match against Seth Rollins at Battleground, and that was to publicly apologize to commentators JBL and Michael Cole, which felt like it took a half hour to complete. But any segment that includes Cole getting noogied is A-OK with me. As Lesnar left the ring, most of us probably thought that’d be the last we would see of the Beast because he rarely makes more than one appearance per show. That wasn’t the case here, as Lesnar appeared during the main event segment, though he had probably wished he’d left when he had the chance.

Rollins spent much of the night trying to reunite The Authority after saying last week he didn’t need them. And this was all because of the reappearance of the Beast Incarnate, who Rollins all but admitted he was afraid of to Triple H. H told Rollins he would be an idiot not to be afraid of Lesnar, and knew he would need a Plan B to meet this challenge head on. Part of the plan includes saying he is sorry to the family, and that was the main event segment for Monday night. As he apologized to J & J Security and Kane, Lesnar’s music hit and the Beast made his way to the ring.

Noble, Mercury and Kane all looked like they had Rollins’ back, but they then left the ring, leaving him all alone to face Lesnar. But they didn’t go for long, and Kane and J & J attacked Lesnar before he got in the ring. Lesnar easily fended them off, and introduced Rollins to Suplex City. Lesnar wasn’t able to hit the F5 on Rollins because Kane reemerged to help him, and then Mercury joined the fray. Noble was legitimately injured by Lesnar and left the arena in an ambulance.

Lesnar couldn’t overcome the 3-on-1 odds, and ultimately ate a Pedigree from Rollins. Rollins stood tall over Lesnar, along with Kane and Mercury and his WWE World Heavyweight Championship, leaving a huge imprint on Lesnar and the WWE Title match at Battleground.

When have we ever seen Lesnar in that position? Maybe the last time was two years ago when The Undertaker chokeslammed him through a table at the end of Raw, but that’s probably it. So having Rollins, even with help, leave Lesnar lying in the ring is pretty remarkable. They’ve certainly turned this feud from good to great in one week.

In any language ... "I WILL KICK YOUR ASS!" - @JohnCena to @FightOwensFight #RAW pic.twitter.com/h6WbZ68Nc6

John Cena and Kevin Owens will probably be co-winners of the best promos of the year come December. Week after week, the two hit home runs just by their mic work, and their in-ring work supplements that so well that this could be the feud of the year before it’s all said and done.

However, we still have an issue with Cena selling injuries. There was absolutely no selling this week by Cena after a huge beatdown by Owens after their match at Money in the Bank just over one week ago. Notorious for not being the best seller in the industry, the least Cena could bring for this angle was a bit of selling how much he’s hurt. It can only help Owens at this point.

Roman Reigns and Bray Wyatt’s feud continued to escalate Monday night, this time as Wyatt distracted Reigns during his match [again] against Sheamus. Wyatt acted like he was taking part in a tea party, and as Reigns ran backstage the camera panned out to Wyatt and a moving rocking chair, insinuating he was having the tea party with Reigns’ daughter.

Let’s not lose sight of the fact that Wyatt’s whole premise is he plays mind games with everyone, and Reigns is selling it really well. While I don’t think we’ll see Reigns’ daughter on-screen during this angle, I wouldn’t be surprised at all if we did. I’m a little worried Reigns is losing some of his heat after regaining a lot of it back during the last few weeks, and I’m not sure this is the best storyline for him. However, the writing is very well done and the tact of having the “candle room” with pictures of Reigns all over the wall having his eyes and mouth cut out is perfect. It’s almost like Wyatt’s saying Reigns is an absentee dad. And that’s a good story to build upon.

We may have gotten a glimpse at who might be Rusev’s next manager, and that’s Summer Rae. Lana, who looks even more amazing with her hair down, went into the ring after Dolph Ziggler’s match and once again played tonsil hockey with Ziggy, causing Rusev, who was watching backstage, to flip his wig… again. He threw his crutches around and wound up falling down, and clutched his injured foot. Summer appeared and handed him his crutch and said Lana wasn’t worth it before walking away.

Yeah, I’m enjoying the way they’re playing this angle while Rusev deals with his injury. If this doesn’t end in anything else other than Rusev completely destroying Ziggler, then it’s all for naught.

WWE celebrated Tag Team Champion Titus O’Neil’s 2015 Celebrity Mega Dad of the Year Award by showing this video package before the Prime Time Players took on The Ascension in a non-title match. Very cool to see WWE give O’Neil some well-deserved recognition.

And while he didn’t play a huge part in the history of WWE, I’d like to make note of career of ‘Nature Boy’ Buddy Landell, who passed away over the weekend at the age of 53. WWE posted the following on its website:

"WWE is saddened to learn of the passing of William Ansor, aka "Nature Boy" Buddy Landel.

Landel made his in-ring debut in 1979, performing in regional promotions before signing in 1985 with the NWA’s Jim Crockett Promotions. With flowing blond locks, glittering robes and WWE Hall of Famer J.J. Dillon in his corner, Landel set his sights on then-NWA World Champion "Nature Boy" Ric Flair. Though he left Crockett Promotions by the end of the year, Landel left his mark, defeating Terry Taylor at Starrcade 1985 to capture the NWA National Championship.

Landel continued to compete in various promotions in Tennessee and Alabama, then returned to the NWA in 1990 to face off with Flair in a "Battle of the Nature Boys," before moving on to compete in Smoky Mountain Wrestling. He also made brief appearances in WWE in 1995 and 1996.

WWE extends its condolences to Landel’s family, friends and fans."

• Kane d. Dean Ambrose by pinfall after a chokeslam off the top rope. Seth Rollins distracted Ambrose, allowing Kane to get the win.

• Sheamus vs. Roman Reigns ended in a No Contest due to Reigns leaving the arena after seeing another Bray Wyatt promo on the Tron.

• Neville d. Kofi Kingston by pinfall via the Red Arrow.

• The Bellas d. Naomi and Tamina Snuka by pinfall after Nikki hit Naomi with the Rack Attack.

• Non-Title: Ryback (c-IC) d. Mark Henry by pinfall via a splash off the top rope. Big Show was on commentary during the match.

• Dolph Ziggler d. Adam Rose by pinfall via a superkick.