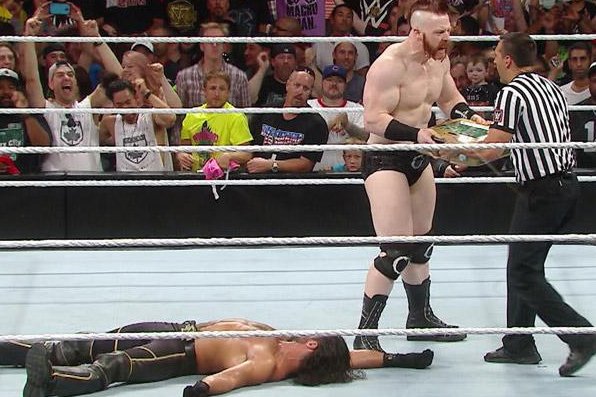 Sheamus looks to cash in his MITB briefcase while Seth Rollins is out cold during Raw’s main event.

Down the road from Daniel Bryan’s house, the Xfinity Arena in Everett, Washington played host to WWE’s Raw on Monday night. We’re two weeks away from Summerslam, and we didn’t have John Cena, The Undertaker, or Brock Lesnar in the house. And that means next week’s Raw will be loaded heading into the four-hour Summerslam event on August 23rd.

There were some interesting happenings on Raw Monday night, including “Arrow” star, Stephen Amell, being in attendance. And one could guess he would be getting involved somehow into the action – and he did. Sheamus, who’s reportedly suffering from the effects of a concussion suffered last week, didn’t wrestle again, but did get involved physically at the end of the night.

WWE also produced this promo package for the Lesnar-Taker main event at Summerslam. Once again, the production people have hit a home run. Lesnar and Taker will be face-to-face next Monday on Raw for the go-home show to Summerslam. That should be good.

Let’s check out what happened on another edition of Monday Night Raw:

The WWE World Heavyweight Champion, Seth Rollins, once again led off the program with a promo that’s really nothing we haven’t heard before. I have to admit, the Cena “satellite promo” with the Schwarzeneggeresque still photo with the mouth cut out – which reminds me of past great Conan O’Brien segments – was pretty funny. I laughed. And then Cesaro, Randy Orton and Kevin Owens came out to vie for that championship Rollins was wearing around his waist should Cena not be cleared for Summerslam.

I was getting ready to send out a Tweet that I had a feeling Orton would win the match right before he came in and hit an RKO out of nowhere to both Owens and Cesaro. I hate when my gut feeling is right sometimes. I thought having Cesaro or Owens against Rollins in the main event would be something new and different and exciting, but nope – we still need Orton in that spot. And the ending certainly didn’t justify the means.

Orton and Rollins put on a good match, as we expected. Orton hit Rollins with an RKO as Rollins jumped off the top rope which made for a great visual and an obvious winning situation if Orton could pin him quickly. As Orton went for the pin, Sheamus arrived and broke up the pin attempt, causing the disqualification.

Sheamus got rid of Orton and teased cashing in his Money in the Bank briefcase, but he wouldn’t let go of it. He gave it to the ref but there was really some awkward time killing before Orton came back in and prevented Sheamus from getting his title shot. It was a nice tease, but it was marred by an absolutely ridiculous image of Sheamus and the ref both grabbing the briefcase for what seemed to be 30 seconds. Very awkward, and it didn’t make for a great ending.

Sometimes, you just have to let go ... ... of the #MITB briefcase! @WWESheamus @RandyOrton #RAW pic.twitter.com/6a9tSt2jQH

Even if Orton was to win the title on Monday night, I’m not too sure many people would be happy with that outcome. I would’ve much rather seen Cena win the title given the absolute fantastic year he’s been having.

We had somewhat of a surprise return on Monday night during the MizTV segment, and I’m not talking about Miz’s guest, Daniel Bryan. Bryan, who lives down the road from where Raw was taking place, was there to plug a little about his new autobiography entitled "Yes!: My Improbable Journey to the Main Event of WrestleMania" (available here).

Bryan also talked a little about being a judge on Tough Enough before The Miz changed the subject to Ryback and the Intercontinental Championship. The Miz said Ryback should forfeit the Intercontinental Title and give it to him; much like Bryan had to forfeit the title earlier this year due to his injuries. Big Show came out and didn’t care too much for what Miz was saying, but we didn’t care what Show was saying, so I guess we’re all even.

Ryback, who was suffering from a staph infection in his right knee, made a surprise return and took out Miz and Big Show before celebrating in the ring with Bryan. It’s good to see The Big Guy back and looking relatively good.

All the Divas involved in the Divas Revolution will complete in a Three Team Elimination Match after each of the teams brawled with each other in the opening match. Team Bella will face Team B.A.D. and Team P.C.B. for what pretty much amounts to bragging rights.

This makes it pretty clear that WWE wants Nikki Bella to supplant A.J. Lee as the longest reigning Divas Champion in history, otherwise the Divas Championship would finally change hands at the biggest event of the summer. Bella has a few more months to break the record, and will hopefully drop it to one of the new Divas to bring the division back to prominence. Now they’re just in a holding pattern, and it’s just a matter of time before the audience starts becoming bored with it.

Speaking of Divas, Summer Rae and Lana got into it during Rusev’s match against Mark Henry, causing a disqualification because, well, I don’t actually know why. Rae beat up Lana and put her in The Accolade, with no return from Dolph Ziggler, who was rumored to possibly return to Raw Monday night.

Rusev also has a new Bulgarian flag to drop from the rafters with a photograph of himself in the forefront. I kind of dig it.

Rusev was a bit excited to see @RealSummerWWE put @LanaWWE in The #Accolade! #RAW pic.twitter.com/WJgaRRGyaL

The Team Team Titles will be on the line at Summerslam, and this time in a Fatal 4 Way match. Despite The New Day getting a win over Los Matadores on Monday night, the Prime Time Players will defend their championships against Los Matadores, the Lucha Dragons, and The New Day at the Barclays Center on August 23rd – and it’s in a match that’s the most difficult to retain since three other teams can be pinned or submit and Darren Young and Titus O’Neil would lose the Tag Titles.

The champions don’t have to be involved in the decision, which is always a selling point in Fatal 4 Way matches. I think this could be a good way to get the Tag Titles back on The New Day without the Prime Time Players getting pinned, and having them chase the titles again. The Tag Team division has been mired in mediocrity for a while now, and the Prime Time Players have unfortunately been a victim of sheer laziness by the creative team. They’re not as entertaining as The New Day, which makes me want them to lose the titles quicker than they probably deserve.

I’ll never understand why some titles aren’t treated with importance – they’re the epitome of what wrestlers want to achieve in their profession. It’s infuriating that WWE doesn’t book its champions as legitimate wrestlers deserving of their titles, and the Prime Time Players are a prime example of that. It’s great to be entertaining, and the team has a ton of charisma, but sometimes that only goes so far.

Stardust and Stephen Amell furthered whatever kind of beef they have with each other by having a small brawl after the King Barrett/Neville match. Stardust, who attacked Neville, went to ringside where Amell was seated and shoved him with a palm to the face. Amell responded by hopping over the rail and into the ring and lighting up Stardust with punches until security came in to separate them.

After a commercial break, Triple H addressed Amell and Neville backstage, saying Amell wasn’t “one of them” and called him just an actor. Neville challenged Barrett and Stardust to a tag team match against himself and Amell for Summerslam, and Triple H agreed – only because Amell said he would sign whatever waivers he needed to to step into the ring against Stardust.

The Ambrose/Reigns vs. Wyatt Family feud didn’t really take the next step on Monday night. Ambrose and Harper had a good match, with Harper coming out on top, but there wasn’t really anything furthered. We’re probably not getting a third member of the Wyatt Family heading into Summerslam, which means no Sting. Sting could conceivably show up and begin a program with another superstar, but he won’t be in action at the biggest event of the summer, which would have been cool to see.

• Six-Woman Tag Match: Team Bella (Nikki, Brie and Alicia Fox) d. Team B.A.D. (Sasha Banks, Naomi and Tamina) by pinfall after Brie rolled up Tamina for the win. Team P.C.B. [Paige, Charlotte and Becky Lynch] was on commentary for the match and brawled in the ring with everyone after Tamina, Naomi and Sasha Banks attacked Brie after the match.

• #1 Contender Triple Threat Match: Cesaro vs. Randy Orton vs. Kevin Owens. Awesome match. Orton got the win via an RKO to both Owens and Cesaro, and pinned Cesaro.

• Rusev vs. Mark Henry ended in a No Contest – I think? Lana was attacked in the ring by Summer Rae and the ref called for the bell. Rae then put The Accolade on Lana.

• Neville d. King Barrett by pinfall via the Red Arrow. Stardust attacked Neville after the match.

• WWE World Heavyweight Championship: Randy Orton d. Seth Rollins (c) by disqualification after Sheamus interfered. Sheamus then teased cashing in his MITB briefcase but Orton nailed him with an RKO.

The Straight Shooters debuted last Thursday night with an hour of highly entertaining pro wrestling talk brought to you by myself and Philly.com’s Vaughn Johnson. We talked about our best Roddy Piper memories, the upcoming Summerslam card - most notably Lesnar/Undertaker, Cena/Rollins, and the Divas revolution – and we also talked about Lucha Underground, Ring of Honor, Impact Wrestling and more.

You can listen to our podcast here. Former WWE creative writer, Andrew Goldstein, will be our guest this Thursday on Wildfire Radio at 6:30pm. We’ll talk about a multitude of subjects, but this is one podcast you want to make sure you listen to live. Mark it down.