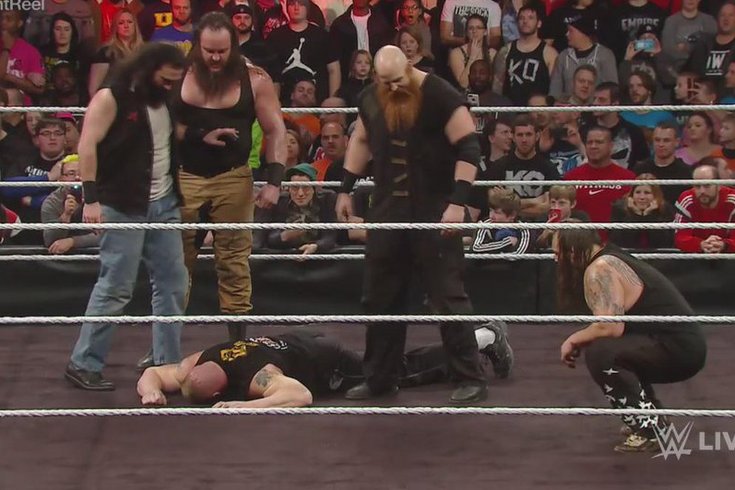 Bray Wyatt and company left Roman Reigns and Brock Lesnar incapacitated in the ring as Raw went off the air Monday night.

The final Monday Night Raw before the 2016 Royal Rumble took place at the Nationwide Arena in Columbus, Ohio. It felt like the show, being a go-home Raw to a pay-per-view fell flat, and the audience didn’t really help matters any. They were quiet for most of the night, which translated into many flat segments when they really needed the fire of the crowd to come through on television.

And it didn’t. I actually felt bad for a lot of the talent going out there and receiving little to no reaction, especially heading into the Royal Rumble on Sunday. However, how Raw ended may have already answered a few questions we had going into Sunday all the way to WrestleMania.

There was also cause for celebration as Raw took the air as WWE, which they do each year, aired a tribute to Martin Luther King, Jr. on the holiday that bears his name.

Here’s what went down on Raw Monday night:

The Wyatts have their way with Reigns and Lesnar

The WWE World Heavyweight Champion opened Raw with a promo in the ring before Chris Jericho interrupted him. Jericho seemed to have good reason – he wanted Reigns and Brock Lesnar in his Highlight Reel and Reigns said he’d like that. The League of Nations interrupted them, which led to a match between Reigns and Rusev with Jericho as the special referee.

Reigns won a pretty good opening match, but again, the crowd would’ve had you think you were watching a couple of jobbers before the show even began with their lack of excitement.

Later in the night, Vince McMahon and Stephanie came out to draw the #1 entrant into the Royal Rumble match, and to nobody’s surprise, each plastic ball in the lottery contained the same name – Roman Reigns. He’ll be entering the Royal Rumble match as the first entrant, but I can’t say I didn’t see that coming. With the way they telegraphed the entire segment, it was just too predictable. But it also adds the element of almost guaranteeing a new champion after the Rumble is over. Will they really have Reigns go the distance and keep the championship? I’m not so sure.

What WWE hasn’t done before is have the first or second competitor go the distance and then be the last wrestler eliminated from the Rumble, adding some heartbreak at the end. In 1995, Shawn Michaels and the British Bulldog both started out the Rumble match and were the last two standing in the match before Michaels eventually eliminated the Bulldog, but Bulldog losing in that fashion wasn’t even a part of the story as much as Michaels winning was. And let’s not forget that was the shortest Rumble match in history. I can absolutely see Reigns staying in until the end of the Rumble before being the last one eliminated. If the creative team can book it properly, that could make Reigns even more of a fan favorite.

This also added another layer heading into the main event segment – a confrontation between Reigns and Lesnar on an episode of Jericho’s Highlight Reel. Reigns interrupted Lesnar’s entrance, which didn’t sit well with the Beast Incarnate. Once in the ring, Reigns speared Lesnar out of nowhere before the League of Nations ran in and attacked both superstars. After fending them off, Reigns hit Lesnar with another spear, much to the chagrin of the fans in attendance, who decided to boo Reigns. The Wyatt Family then appeared and took both men out, leaving them lying in the ring as Raw went off the air.

I haven’t seen Lesnar really manhandled that way in a long time, so could the Wyatts have been used to possibly set a WrestleMania match between the Beast and the Eater of Worlds? Brock vs. Bray certainly would be a great match, but something tells me Wyatt needs a win this year after coming off two losses to John Cena and The Undertaker, respectively.

Kalisto loses, but why?

Dean Ambrose and Kalisto teamed up to take on one-half of the League of Nations, Sheamus and the United States Champion, Alberto Del Rio. Del Rio regained the championship on SmackDown after losing it last Monday on Raw to Kalisto. I figured Del Rio would eventually win the title back, but not that soon. And now with a rematch already being booked between Del Rio and Kalisto for another title match at the Royal Rumble, I’m not sure why they couldn’t just save the title win for Del Rio for the pay-per-view. Unless they plan on putting it back on Kalisto…

I’m not sure why you’d have a clean pin here, but why would you pin Ambrose or Kalisto? It should’ve been a disqualification with Kevin Owens, who was on commentary during the match, interfering.

The New Day laid their beloved trombone, Francesca, to rest on Monday night. Big E also avenged the death of the trombone by defeating Jey Uso in singles competition. It was confirmed that The New Day would defend their WWE World Tag Team Championship against the Usos on Sunday, which seems like a random match just kind of thrown together. These two teams haven’t feuded in a while and now the Usos have a chance to reclaim the tag titles in what feels like a quickly put together match. Which makes me think a title change will take place. I hope I’m wrong.

Becky Lynch gets another shot

Becky Lynch was gold on the mic after her match with Tamina, who she made submit to the Disarmer. The WWE Divas Champion, Charlotte, was sitting at ringside with her father during the match. The two traded barbs on the mic after the match and after Becky insulted Ric Flair, Flair accepted a match for the Divas Championship on Sunday on behalf of his daughter.

It's ON this Sunday! @RicFlairNatrBoy just accepted @BeckyLynchWWE's challenge on behalf of @MsCharlotteWWE! #RAW pic.twitter.com/KqR57szzih

Charlotte didn’t seem too pleased, so this has the makings of Charlotte dropping her father and going on her own. I think she’s ready, and she can be a great heel without her father in the way.

Paige and Natalya return to television

Paige and Natalya returned to Raw and looked great. The angle between Becky and Charlotte has been great, but there needs to be more going on in the division because the talent is definitely there. Hopefully Sasha Banks’ reported injury isn’t too serious so she can get back in the fold soon, also.

Check back here during the week as I preview the Royal Rumble pay-per-view and give you my prediction as to who will win the Rumble match and walk out of Orlando with the WWE World Heavyweight Championship.

• Becky Lynch d. Tamina by submission via the Disarmer.

• Sheamus and Alberto Del Rio d. Dean Ambrose and Kalisto by pinfall after Sheamus hit Kalisto with a Brogue Kick. Kevin Owens was on commentary during the match.