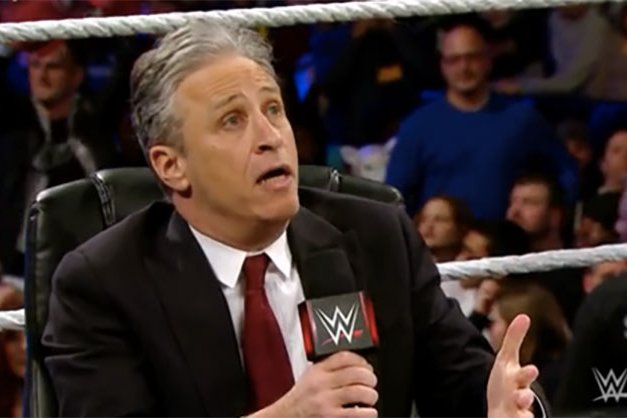 Jon Stewart got up close and personal with Seth Rollins Monday night.

RAW was live at the Prudential Center in Newark, New Jersey Monday night, and we’re still on the road to WrestleMania 31 on March 29th.

Paul Heyman had to use his mellifluousness once again since WWE World Heavyweight Champion, Brock Lesnar, wasn’t in the building. Heyman again tried to build up the WrestleMania main event of Roman Reigns and Heyman’s client, Brock Lesnar. Heyman is an absolute masterpiece of an artist when given the microphone to build to a match. He’s done it with C.M. Punk, and he’s continued to do it the last three years with Brock Lesnar. Lesnar is scheduled to appear on Raw next week, so the heat should really start picking up for this year’s WrestleMania main event. Reigns, despite being last night’s main event loser, ended the program strong by taking out The Authority.

It would seem to have been WWE Hall of Famer, Booker T’s, last night as part of the Raw broadcast team, as Triple H fired him during a promo in a random act of frustration after Booker T publicly stated on commentary that Triple H’s politicking and control blocked Sting from previously coming to the WWE. Triple H then reneged on Booker’s firing, explaining that’s what control is all about. Triple H explained he’s been given an opportunity to end the “last vestige of WCW.” The story would seem to be Triple H wants to end WCW’s legacy once and for all, and, well, we still don’t exactly know why Sting’s here. I’m not so sure WCW needs to have such a prominent backstory to this feud, but Sting was WCW, so I understand that. I’m just not sure it’s needed to make the match more interesting. I still think a stipulation should be added, such as control for WWE.

Jon Stewart’s involvement with Seth Rollins was more of a means to an end, as Randy Orton’s theme music interrupted the point at which it looked like Seth and his bodyguards, Noble and Mercury, were going to pummel Stewart. While Rollins and his cronies were distracted by Orton, Stewart got him with a swift kick to the no-no’s, and he escaped while Orton retreated to the back. I don’t know why WWE keeps putting off Orton eventually turning, again, on Seth Rollins to set up their WrestleMania match. They should be involved in a blood feud right now, and the slow burn is not needed for this.

Congratulations @Madusa_rocks for being inducted into the @WWE Hall of Fame...Bold, Bright, Beautiful...and tough as nails! #PIONEER

WWE is counting on Bray Wyatt to sell their audience on a match with the Undertaker at WrestleMania. He’s been doing his fair share of promos on television the last month, and set fire to a casket last night – shades of Royal Rumble ’98 when the Undertaker’s brother, Kane, did the same thing. Wyatt has been doing a fantastic job getting people to care about a possible match with the Undertaker, a man we haven’t seen since he was destroyed by WWE World Heavyweight Champion, Brock Lesnar, at last year’s WrestleMania. In all likelihood, the Undertaker won’t appear on television until WrestleMania, which makes this storyline all the more intriguing.

The eventual turn of Damien Mizdow on The Miz is being built up really well, but I don’t think they should save it for WrestleMania. Do it in the ring, in front of the audience. Last night would have been a perfect audience to do it in front of, as Newark would have provided probably the best reaction Mizdow’s turn would see. The whole commercial angle from last week played well into The Miz just trying to upstage Mizdow, not even knowing what the commercial he starred in was about. Hint: erectile dysfunction.

A.J. Lee also returned to WWE last night after taking time off to heal some injuries, helping Paige fight off the Bellas after the Divas Championship match. The Divas division just got a lot more interesting.

The newest WWE Hall of Fame Inductee was also named last night, as Alundra Blayze, better known to most wrestling fans as Madusa, will be inducted the night before WrestleMania along with Randy Savage, Arnold Schwarzenegger, Rikishi and The Bushwhackers.

Congrats to ALUNDRA BLAYZE, Class of 2015 Inductee into the @WWE Hall of Fame at @WrestleMania 31! @Madusa_Rocks pic.twitter.com/wbuwp21fYy

It was announced that Wiz Khalifa will be the guest star next week on Raw. He’ll also perform for the live audience, in the arena and on television.