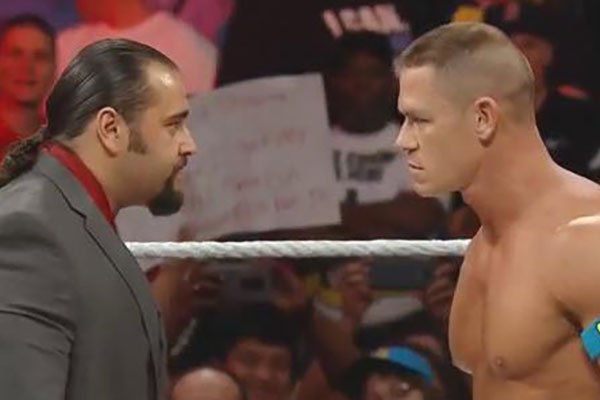 Rusev and John Cena face off during a contract signing for their WrestleMania rematch.

Raw delivered its 1,138th episode Monday night at the Wells Fargo Arena in Des Moines, Iowa. We are less than two weeks away from WrestleMania and I’ve witnessed the least amount of hype for the biggest event of the year in as long as I can remember.

We’ve yet to see Brock Lesnar and Roman Reigns face-to-face since January 26th – the night after the Royal Rumble.  That’s not a great way to build to the biggest main event in the biggest pay-per-view of 2015. However, it was nice to see a Lesnar video package once again. They’ve been the biggest sell for the Beast Incarnate heading into his pay-per-view matches through the last three years, and this one was no different.

Lesnar’s mantra on fight day is simple: “It’s a day that I get to show up, kick somebody’s ass, and get paid to do so.” There’s so much intensity behind these promos from Lesnar that it automatically makes the match feel that much more important.

And this match between him and Reigns needed that.

We also had another fascinating Paul Heyman promo where his microphone cut out, again, for the third week in a row. Hell bent on reinforcing his point that Reigns cannot defeat Lesnar, Heyman was then interrupted by the challenger to Heyman’s champion. But Reigns wasn’t there to talk to Heyman. He looked into the camera and told Lesnar that he was going to beat him at WrestleMania. Baby steps, I guess. Heyman then confirmed that Lesnar and Reigns will face off next week on Raw. It’s about time. I understand they were trying to build anticipation by keeping the two away from each other until the go-home Raw, but I just don’t think it was necessary. Maybe for another pay-per-view, but not WrestleMania.

It's @STING and #TheViper @RandyOrton, fighting side by side on @WWE #RAW! #Vigilante pic.twitter.com/l05kBlAf5N

Raw opened with Seth Rollins leading the charge with The Authority, sans Triple H and Stephanie, in the ring. Randy Orton said he would challenge Rollins to a match last week at WrestleMania, and Rollins says that he’s accepted Orton’s challenge. However, there was one condition – Orton had to face Rollins in the main event of Raw Monday night. Yeah, this isn’t a setup or anything. Orton accepted, and the main event was set. Throughout the night, The Authority teased dissension among the ranks, and it looked like Rollins would be all alone for his match against Orton.

And what did we expect? It was all a swerve. All the tension in The Authority was just a ruse and Orton wound up all alone in the ring with The Authority surrounding him. The lights went out, and Sting appeared. Seeing Sting inside a WWE ring is still as surreal as it was when it happened for the first time at Survivor Series. The Authority retreated and Sting and Orton were left standing tall in the end.

John Cena and Rusev took part in a contract signing, and if history is any indication, it was a foregone conclusion that this would end in some type of controversy. Cena’s obsession with taking the United States championship away from Rusev elevates the importance of that title each and every week. It’s now the second-most important title in WWE by default. Rusev presented his own lawyer and refused to sign the contract that Lana verbally agreed to give Cena last week.

Rusev gave a prepared statement that further heated Cena and was met with a rousing “USA!” chant from the crowd in Des Moines before signing the contract and shoving the table at Cena and then escaping the ring. It was an interesting wrinkle in the storyline, and it’s interesting that Rusev decided to sign the contract after his lawyer basically said he would refuse to when he could have held out another week to further build the angle. But, no further build is really necessary for these two as they should have a tremendous match at WrestleMania. Look for another physical altercation between the two next week on the go-home Raw to WrestleMania.

Lana, conspicuous by her absence, may return at WrestleMania after she’s done filming a movie called Interrogation.

"@WrestleMania will be your final resting place ... it will also be MY CORONATION!" - @WWEBrayWyatt #NewFaceOfFEAR pic.twitter.com/B7RCxavYGc

Bray Wyatt is absolutely stealing the spotlight in his upcoming match with The Undertaker at WrestleMania. He says WrestleMania will be The Undertaker’s final resting place, and it will be Wyatt’s coronation. The Undertaker’s mind games from last week have not bothered Wyatt. Methinks Wyatt has some mind games of his own that we’ve yet to see. Either way, this match is going to be fantastic.

The latest WWE Hall of Fame inductee is the “Living Legend” Larry Zbyszko. Zbyszko was trained by WWE legend and Hall of Famer, Bruno Sammartino, and made his debut in WWE in the 1970’s. A former AWA World Heavyweight Champion and WCW Television Champion, Zbyszko joins “Macho Man” Randy Savage, Arnold Schwarzenegger, Rikishi, The Bushwhackers and Alundra Blayze in joining the WWE Hall of Fame’s Class of 2015.

And guess who’s coming to Raw next week? Bill Simmons and Snoop Dogg are set to appear. And we finally have a Lesnar/Reigns showdown.

• Ryback d. The Miz by pinfall via Shell Shocked.

• Big Show NC [No Contest] Erick Rowan. The match never started as Show attacked Rowan as he entered the ring and left him lying.

• Mark Henry wins an 11-man battle royal to qualify for a spot in the Andre The Giant Memorial Battle Royal at WrestleMania.