WWE Raw roundup: The Shield reunites for one match before Hell in a Cell 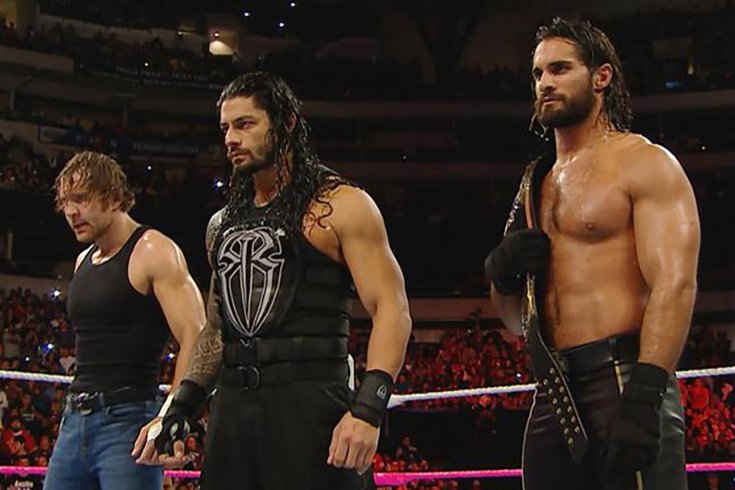 The Shield reunited on Monday night for a dance with the Wyatt Family, but would it stay that way?

We’re on the highway to Hell in a Cell this Sunday, and Raw from the American Airlines Center in Dallas, Texas, Monday night was supposed to have a go-home show feeling of WrestleMania proportions due to the star power that WWE brought in. With “Stone Cold” Steve Austin, Brock Lesnar, Undertaker, Shawn Michaels and Ric Flair all under the same roof, this would have to be one of the biggest Raws of the year, right?

Well, they tried. They did. It just didn’t come across on television like it was one of the biggest Raws of the year. They had some really good stuff on the show, including The Shield reuniting for a bit, but ultimately I thought WWE could have done a lot more hyping a Hell in a Cell event that looks great on paper.

“Stone Cold” Steve Austin opened the show with a promo and introduced The Undertaker. This was the loudest I’ve heard the crowd at a WWE show on television in as long as I can remember. Undertaker and Lesnar would almost come to blows in a confrontation, but Lesnar played his own mind games with the Dead Man and left the ring.

After the show, the Beast Incarnate joined “Stone Cold” Steve Austin on his podcast live from the arena. Neither side did much in terms of building towards a match at WrestleMania in the same city next year, so it might be safe to say that match won’t be happening. However, Lesnar’s interview was fantastic and I highly recommend giving it a listen when you can on the WWE Network.

I absolutely hate overdone six-man tag team matches and even regular tag team matches, and this episode of Raw provided us with both! Exciting. First, we had a six-man tag featuring the WWE Tag Team Champions, The New Day, going against the United States Champion, John Cena, and the Dudley Boyz. It was an okay match, but nothing too spectacular, except after the match when the Dudleyz and Cena put Xavier Woods through a table. That was a pretty cool spot.

Speaking of Cena, he’ll defend his United States Championship at Hell in a Cell in another open challenge. Welcome NXT? We shall see.

We then had a random six-man tag later in the night featuring Dolph Ziggler, Cesaro and Neville competing against Rusev, King Barrett and Sheamus. Again, nothing really happened here. It’s not that these matches are bad matches, they just don’t really facilitate storylines, so what’s the point?

Everything’s a mess. Will the picture get better when the Bellas are out of the picture? Probably not. I don’t blame this entirely on the Bellas – the creative writers have not given this whole Divas Revolution a chance to succeed from the very beginning. Is that their fault? Maybe. Vince McMahon is making the final decisions. All I know is that heading into Survivor Series and the end of the calendar year, this division needs another major shakeup.

Shawn Michaels also made a special appearance, this time in a toe-to-toe promo with the WWE World Heavyweight Champion, Seth Rollins. Rollins, who thought saying he was the next Shawn Michaels was making a statement, but ol’ HBK had a good comeback – he was worried about being the best wrestler ever than to be worried about being compared to one of them. Maybe that’s what’s wrong with the WWE locker room nowadays.

Apparently Kane was suspended by The Authority for putting himself in the lumberjack match against Rollins last Monday, so that explained his absence. Yep, Kane wasn’t on the go-home show to his championship match at Hell in a Cell. But it led to something better.

This later led to HBK basically playing reverse psychology backstage in regards to the Dean Ambrose-Roman Reigns partnership in taking on the Wyatt Family. This was after Rollins had competed in a match against Ryback.

Michaels said Rollins should team up with his former Shield brethren, but Triple H was against the idea. Rollins, apparently trying to prove some sort of point, took Michaels up on that offer and agreed to team with Ambrose and Reigns to take on the Wyatts in the main event.

Speaking of the Wyatts, there was no sign of Luke Harper. Erick Rowan was back, though. Why? Who knows. Who cares.

Towards the end of the match, Rollins looked like he would fake a knee injury while Ambrose was going for a tag, and hopped onto the floor and backstage. It was weird simply because the commentators didn’t mention it afterward and there was no Demon Kane appearance that one would think would accompany such a ridiculous storyline heading into his big championship match on Sunday. Was it legit? We shall see.

Owens' #HIAC opponent @Ryback22 answers @FightOwensFight's powerbomb with one of his own! #RAW pic.twitter.com/skZARfwxqm

Ryback finally got his hands on Kevin Owens after the Intercontinental Champion notched an impressive victory against the World’s Strongest Man, Mark Henry.

Giving the big man the Pop-Up Powerbomb was very impressive by Owens, but shortly after his win he ate his own Pop-Up Powerbomb at the hands of Ryback, who came out after the match. Henry helped in that regard, tossing Owens into the ring from the outside. Hopefully this feud is coming to a close soon, because I’ve been very unimpressed with the whole storyline.

Check in later in the week for my exclusive Hell in a Cell preview.

• Six-Man Tag: The New Day d. The Dudley Boyz and John Cena by pinfall via a schoolboy by Xavier Woods. The Dudleys and Cena gave Woods a triple powerbomb through a table after the match.

• Nikki Bella and Alicia Fox d. Sasha Banks and Naomi by pinfall via the Rack Attack on Naomi.

• Rusev/King Barrett/Sheamus d. Dolph Ziggler/Cesaro/Neville by pinfall after Sheamus hit Ziggler with a Brogue Kick from the outside of the ring and Barrett pinned him.

• The Wyatt Family d. Seth Rollins/Dean Ambrose/Roman Reigns by disqualification after Ambrose grabbed a kendo stick from under the ring and attacked Braun Strowman.