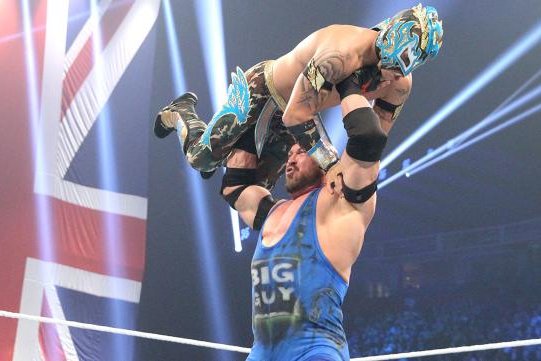 Ryback has Kalisto high up in the air during their tournament match on SmackDown Thursday night.

The WWE World Heavyweight Championship tournament continued on SmackDown Thursday night from the Manchester Arena in Manchester, England. Of course, it was chock full of B-list stars, but that didn’t make the matches any less entertaining, and we actually had quite the surprise outcome in one of the matches.

The Wyatt Family would kick off the program hot off the heels of being destroyed by the Brothers of Destruction on Monday night. Could they gain their heat back after being so ridiculously overmatched? Stay tuned.

Bray Wyatt responded swiftly after The Undertaker and Kane returned to television on Monday night, weeks after his family basically kidnapped their bodies and leave them for dead. With Wyatt’s newfound power from the souls of the Brothers of Destruction comes the satisfaction of knowing he’ll come out on top, or so that’s what he would have you to believe. No talk about why he let the brothers destroy his family on Raw Monday night, no talk about why his newfound powers didn’t help him against the two foes he stole those powers from. Nothing. Just more weird talk.

Oh, and a challenge.

Wyatt challenged the Brothers of Destruction to a tag team match at Survivor Series, where it will be two members of the Wyatt Family against them. At the end of the night, The Undertaker accepted the challenge on behalf of him and Kane, via a voiceover after the main event. What a way to accept a match, right?

Speaking of the main event, Luke Harper and Erick Rowan would renew their rivalry with The Usos in the night’s finale in a tag team encounter. The match would end in a disqualification because Wyatt and Strowman couldn’t bear to stay out of the ring. After the match, the gong hit and The Undertaker’s voice came over the speakers, accepting Wyatt’s challenge for Survivor Series.

So, how about that tournament!? We had some doozies on Thursday night, including matches featuring Neville, King Barrett, Stardust and Kalisto. Weird, right? We could assume Stardust and Kalisto both would lose, but only half of that statement is correct.

Some may look at Kalisto defeating Ryback in the tournament as embarrassing for The Big Guy, I actually don’t mind the story. While Ryback would have made sense in being in the Final Four, the match between him and Kalisto really made the Lucha Dragon look good. If that was the plan, then it’s awesome. If Kalisto is just going to get killed by his next opponent, then I’m not sure this outcome makes much sense at all. I did like how the announcers put over how big the win was. Ryback and Kalisto shook hands after the match, so it looks like Ryback isn’t turning heel anytime soon.

Alberto Del Rio also advanced in the tournament after a win over Stardust. Del Rio made sure to get his heel heat in by saying the two Manchester soccer teams divide the city. You can’t talk badly about soccer in England and get away with it! But, Del Rio did. Go figure.

And what happens when the crowd does something you don’t want it to do, especially on a taped show? You edit it, of course! Although WWE had to expect Barrett would get cheered in his home country of England, it made sure that boos rained down on the reigning King of the Ring when he made his entrance for a first round WWE World Heavyweight Championship tournament match against Neville. The two had a great match, but clearly obvious crowd editing like that just turns me off and whether the match is good or not, sours me on it.

Here are the updated brackets for the tournament for the second round:

A big negative to this show was no women’s matches. You may not have even noticed until you read that, and that’s the problem. Women’s matches should be showcased on every show, especially now with the influx of fantastic talent. No women’s matches on SmackDown, and for what? A Strowman-Fandango squash match? This could have been done better.

Have you seen The Undertaker hit the Tombstone Piledriver on a guy in a turkey costume yet? Please press play, then.

The former WWE World Heavyweight Champion underwent surgery on his knee this week, and WWE filmed it. Here’s video of the beginning of Seth Rollins’ journey to getting back into the ring. [Warning: graphic content.]

• Braun Strowman d. Fandango by submission via the bearhug sleeper.

• The Usos d. Luke Harper and Erick Rowan by disqualification after Wyatt and Strowman interfere.