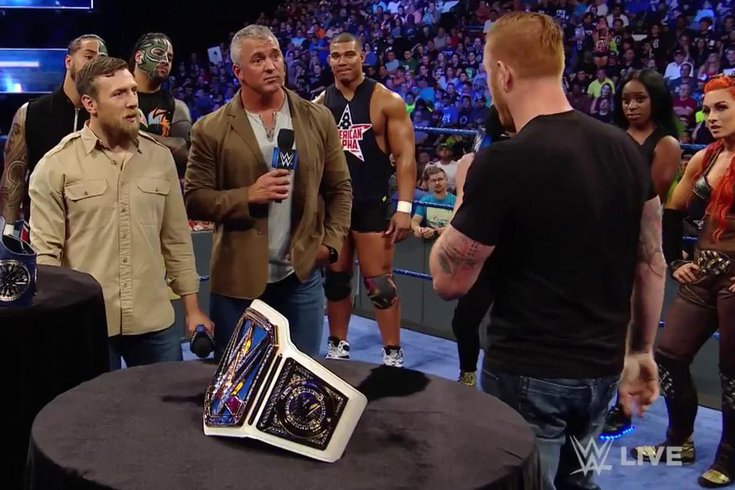 Heath Slater interrupted the opening promo for SmackDown, but he’ll have his shot at gold on the blue brand beginning next week.

Following a relatively blasé showing for SmackDown at SummerSlam on Sunday night, the WWE’s blue brand looked to ramp up their brand on Tuesday night from the Mohegan Sun Arena in Uncasville, Conn. With rumors running rampant that SmackDown would introduce their own tag team and women’s titles, they unveiled the two newest championships for the blue brand on Tuesday night.

We also have a new number one contender for the WWE World Title after a fantastic main event. The Miz also confronted the SmackDown general manager after SmackDown left the air, and we have that for you.

AJ Styles becomes the No. 1 contender to the WWE World Championship

At the very beginning of the program, AJ Styles and Dolph Ziggler got into a backstage altercation as Styles bragged about defeating John Cena at SummerSlam while Ziggler failed to win the gold from Dean Ambrose.

Styles came out for a promo wearing the same arm band that Cena left in the middle of the ring after his SummerSlam defeat. He said he was the face that runs this place quite a few times and said he should be the No. 1 contender for the WWE World Championship.

Still heated about what occurred in the beginning of the program, Ziggler – who unsuccessfully challenged The Lunatic Fringe for the WWE World Championship at SummerSlam – made his way to the ring with WWE officials trying to stop him.

Daniel Bryan came out and booked the main event for the night, which had a little wrinkle – if Styles won, he would get Ambrose and a chance at the WWE World Championship at Backlash, but if Ziggler won, the match would be a Triple Threat Match with Ambrose vs. Ziggler vs. Styles.

Maybe Bryan misspoke, but it certainly sounded like Styles had nothing to lose. Sure, it would increase his odds of winning the title if it was a one on one match against Ambrose, but Styles was seemingly already in the main event. We usually don’t see that happen.

The match was awesome, with Ziggler getting so close to grabbing another opportunity for the WWE World Championship by hitting the Zig Zag after countering the Styles Clash for one of the most fantastic near falls I’ve ever seen. The crowd was so involved in this and Mauro Ranallo on commentary made it even better.

Ziggler tried hitting Styles with the superkick, but Styles got out of the way and kicked the middle rope after Ziggler’s leg got stuck. He then hit the Styles Clash to become the sole No. 1 contender for Ambrose’s title. Styles approached Ambrose at the commentary table and took his headset off, which resulted in a staredown between the two.

Despite receiving 10 staples in his head due to the elbow of Lesnar, Randy Orton made an appearance on SmackDown and was set to talk about what’s next for him. He said that one day, his path and Lesnar’s path would cross again before Bray Wyatt’s music hit.

Wyatt sauntered to the ring and sat down in a rocking chair outside the ring. He said Orton is “just a man” who hurts, suffers, and dies. Wyatt said he wasn’t just a man, but that he was a god, and that gods can never die. Wyatt teased getting into the ring before the lights went out, and as they came back on, he was nowhere to be seen as the rocking chair began rocking back and forth.

Looks like we’ll be getting Wyatt vs. Orton soon.

The Raw commissioner said on Monday night that there would be repercussions for Brock Lesnar after he not only cut open a huge gash on Randy Orton’s head at SummerSlam, but also for F5’ing Shane McMahon afterwards.

It was revealed on the SmackDown Pre-Show on the WWE Network that Lesnar was fined $500 by his counterpart, clearly something that isn’t being taken seriously from the Raw side. McMahon said the issue between himself and Lesnar is far from over.

The program opened with the SmackDown commissioner and general manager announcing the two newest additions to the SmackDown roster – the brand-new Women’s and Tag Team Championships.

"Which one of you will be the first-ever @WWE #SmackDown Women's Champion?" - @WWEDanielBryan #SDLive pic.twitter.com/zc9btSAsJw

It’s 2016, so I understand why both title belts look the same as their counterparts on Raw. Sure, I’d like variety, but I don’t really have an issue with either style.

The new #SmackDown Tag Team Titles will be awarded to the winner of a tournament that ends at #WWEBacklash! pic.twitter.com/mdkTWxt2xZ

As for the tag teams, there will be a Tag Team Title tournament, where the Finals will be held at Backlash, also. On Tuesday night, the tournament began.

Both The Usos and American Alpha made their way to the semifinals of SmackDown’s Tag Team Championship tournament after notching wins over The Ascension and Breezango, respectively.

The Usos are showing more personality and style, which can only mean good things for the tag team division on SmackDown. It needs a fire lit under it, and the two teams that won on Tuesday night could very well meet in the finals.

Heath Slater appeared during the opening promo and finagled his way into the Tag Team Title tournament, as long as he could find a tag team partner by the end of the show. It appears his tag team partner will be Rhyno and they’ll face a tag team that Bryan will apparently bring in.

The return of Nikki Bella from a serious neck injury stole the headlines for the SmackDown’s women’s division at SummerSlam as she pinned Carmella. And there was apparently a match between the two set for SmackDown, but it never got started.

Carmella made her entrance, followed by Nikki. Renee Young was waiting for Nikkiin the ring for a pre-match interview, but Carmella wasn’t having any of it. She attacked Bella during her interview, targeting Nikki’s recently surgically-repaired neck.

When it looked like Carmella was satisfied with the message she sent, she hit Nikki with the Bella Buster, which was Nikki’s sister, Brie’s, finishing move before she retired from the ring.

I guess Carmella’s a heel now, and that’s fine. She needed something to get her going in terms of crowd reaction, because they’ve been silent for the past month.

Even though The Miz’s Intercontinental Championship wasn’t featured on SmackDown [a throwaway segment with Slater doesn’t count], he made sure that he was going to be noticed on ‘Talking Smack’ on the WWE Network after SmackDown went off the air.

Miz confronted Bryan on the set and wanted to know why his title wasn’t showcased on the show. Bryan said he didn’t respect Miz because of the way he wrestles – as a coward – and Miz laid into Bryan in what could be considered one of the most emotional promos he’s ever given in character. Bryan wound up leaving the set as Miz ran him down, calling him broken down and injury-prone in no uncertain terms.

Great work by all involved here to bring some headlines to Miz and the Intercontinental Championship.

• Becky Lynch d. Alexa Bliss by submission via the Dis-Arm-Her. Natalya and Naomi were on commentary during the match.

• SmackDown Tag Team Championship Tournament: The Usos d. The Ascension by pinfall after Jimmy Uso pinned Viktor after a splash from the top rope.

• AJ Styles d. Dolph Ziggler by pinfall via the Styles Clash to establish the Backlash main event as Styles vs. Ambrose for the WWE World Championship. Dean Ambrose was on commentary for the match.