WWE SmackDown rundown: Cesaro foreshadowing his own Money in the Bank win? 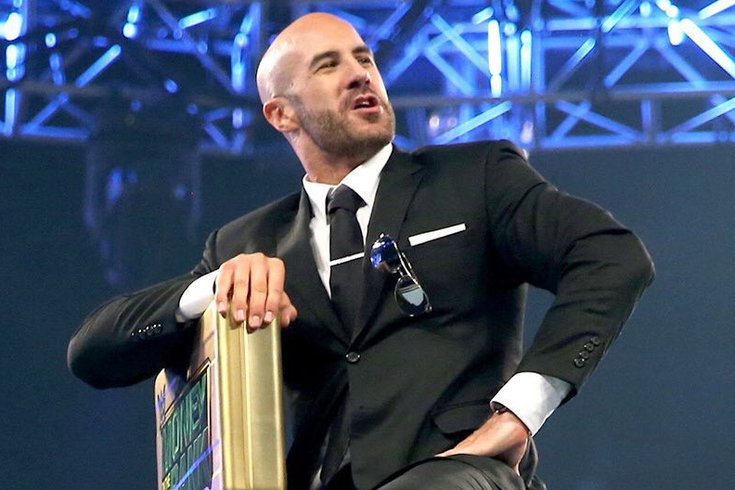 Cesaro climbed the ladder and grabbed the Money in the Bank briefcase to send a message on Thursday night.

WWE took over the BMO Harris Bank Arena in Rockford, Ill. for this week’s edition of SmackDown. Coming off a memorable Memorial Day edition of Monday Night Raw, mainly due to the angle involving AJ Styles and John Cena, SmackDown looked to keep the momentum going heading into the first weekend of the summer.

There wasn’t much in terms of storyline advancement for much of the show, but The Club and The New Day began a battle that could last a very long time. We were treated to a great main event and a pretty good Rusev-Jack Swagger match, so SmackDown was a hit for me on Thursday night.

The New Day started the program by heading to the ring and detailing what happened on Monday Night Raw when they were attacked by not only the Vaudevillains, but also Karl Anderson and Luke Gallows. Before we could get than famous, “WWE World Tag Team Champions” out of Xavier Woods, Anderson and Gallows interrupted them on cue.

Anderson and Gallows made it clear they wanted the titles, and they were soon joined by their third partner, AJ Styles. Styles tried to belittle Kofi Kingston, who then listed his accomplishments to make Styles seem like a fool.

Styles said after 10 years, Kingston was still a joke. Kingston had the last laugh and said it took Styles over 10 years to get to WWE.

After the verbal battle, the night’s main event was set as Styles and Kingston would go one-on-one. It was a great main event, as any match with these two would tend to be. With Styles’ heel turn, we didn’t see many of the high-flying moves that would normally get pops for him, so he’s definitely working a different style, no pun intended. I wonder how well this will allow people to freely boo him even though they love him. No great moves = bored fans who just want to boo you.

Styles got the win using the Styles Clash and The Club stood tall to end the program.

Money in the Bank qualifiers tag up again, Cesaro takes the briefcase

Four of the six Money in the Bank participants were in tag team action, as Dean Ambrose and Sami Zayn teamed up to take on Kevin Owens and Alberto Del Rio Thursday night. It was your general solid tag team television match and everyone played their role well.

Zayn was able to hit the Helluva Kick on Del Rio after Del Rio hit Owens accidentally with an enziguri kick, knocking him out for the time being.

After the match, Owens was hot and took a ladder from underneath the ring and was going to attempt to set it up to climb and grab the briefcase above the ring that’s being used just for show, but Cesaro had other ideas. The Swiss Superman’s music hit and he ran down to the ring and took out Owens and climbed the ladder himself and grabbed the briefcase.

Titus wants a crack at Rusev

Rusev and Jack Swagger had a pretty good television match, but Rusev’s United States Championship wasn’t on the line in this one. Both men have a feud that can be traced back nearly two years when Rusev began his pro-Russian gimmick and Swagger, along with Zeb Colter, was doing his All-American American thing.

Swagger lasted in The Accolade pretty long and almost reversed the hold, but he couldn’t and wound up tapping out to the champion. Rusev wouldn’t let go until Titus O’Neil’s music played and he ran down to the ring for the save. Soon, we’ll see a match between these two. Money in the Bank?

Corbin has left the building

I’m interested in where they take the Baron Corbin-Dolph Ziggler feud. Thursday night, Corbin didn’t even enter the arena because he said the WWE Universe didn’t deserve to see him in person. Ziggler’s low blow on Monday night was a pretty good way to further this feud, but it’s still lacking any importance. I mean, I’m interested in it just because I want to see what they do with Corbin in the long run. And, according to him, he won’t enter an arena until he ends Ziggler.

I’m down with that.

I’m still not sure how I feel about this whole R-Truth/Goldust and Tyler Breeze/Fandango angle. I mean, it’s cool that they’re doing something with the talent, but they’ve been doing the same thing for weeks and nothing changes. Why am I supposed to care about these guys? The creative writing team is giving me no reason to care about any of these guys. So when the Dudleyz beat the faces, why should I care?

• Dudley Boyz d. R-Truth/Goldust by pinfall after Tyler Breeze and Fandango distracted R-Truth and Goldust and D-Von rolled up Goldust.

• Non-Title: Rusev (c-US) d. Jack Swagger by submission via The Accolade. Rusev wouldn’t let go of the hold until Titus O’Neil came out for the save.