WWE SmackDown rundown: Reigns and Ambrose fend off the Wyatts 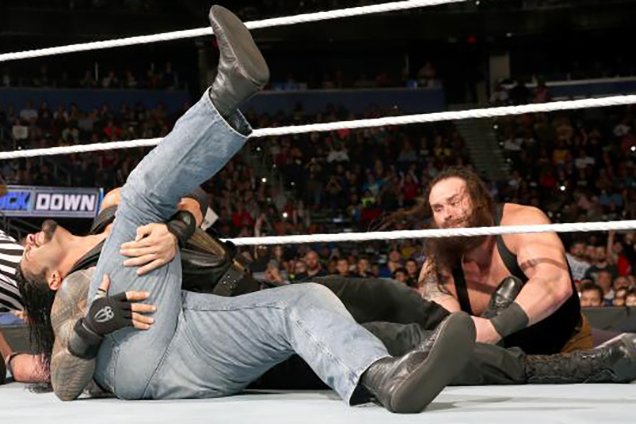 The continuing fallout from Sunday’s Royal Rumble pay-per-view made its way to the Amalie Arena in Tampa, Fla., on Thursday night. Now that we know Fastlane’s main event will feature a No. 1 Contender’s Match for the WWE World Heavyweight Championship, pitting Roman Reigns, Dean Ambrose and Brock Lesnar all against each other, it looks more and more like the Road to WrestleMania will end with a Reigns-Triple H main event, which I don’t mind at all. What did Thursday night have in store for Ambrose and Reigns in the meantime?

We also saw AJ Styles in action and a pretty cool United States Championship match that was different than what we’ve been used to seeing on television every week.

Two of the superstars in Fastlane’s main event to determine the No. 1 contender for Triple H’s WWE World Heavyweight Championship were guests on Chris Jericho’s Highlight Reel on Thursday night. Reigns and Ambrose had a pretty good back-and-forth promo with each other before the Wyatt Family showed up.

Bray Wyatt talked about how his family destroyed Brock Lesnar at the Rumble, even though he walked away on his own after he was eliminated from the match. I still have issues with how little he did when he was eliminated when he could have just hopped back into the ring and eliminated Wyatt himself. Royal Rumble rules – they still don’t make sense. This would lead to a six-man tag team main event, pitting Reigns, Ambrose and Jericho against Luke Harper, Erick Rowan and Wyatt.

This probably wasn’t a surprise to anybody, but the main event would end in a disqualification after Braun Strowman interfered and attacked Reigns on the outside of the ring. It looks like we’re headed for a Strowman/Big Show match at Fastlane to build Strowman into Lesnar’s opponent for WrestleMania since Big Show came out and helped Reigns, Ambrose and Jericho fight off the Wyatts. I really, really, really hope I’m wrong about that and they decide to change their mind. Lesnar and Wyatt would be fine, but Lesnar and Strowman would probably make for one of the worst matches on the card, despite Lesnar’s ability to enhance such a dreadful match.

But, hey, Big Show is a face again. I guess that’s cool? This is his record 52nd face turn of his career, certainly a [faux] record that he’s probably happy to have forever.

The program opened with the WWE World Tag Team Champions The New Day addressing The Rock’s promo from Raw on Monday night, and they weren’t alone. They were joined by Miz and it became sort of a powwow against The Rock before his cousins, The Usos, showed up. Probably the highlight of the opening promo was Big E calling what The Rock’s cooking doo-doo. It’s so simple, yet so entertaining.

Titus O’Neil and Dolph Ziggler would join The Usos in an eight-man tag team match in the opener, defeating the champions and Miz.

Kalisto defended his United States Championship against Neville in a really good match. It seems like Kalisto has already defended the title more than Alberto Del Rio ever did after he defeated John Cena in October. The push Kalisto is receiving could be sustained if he continues surprising people inside the ring and his matches continue to be some of the best on television. Neville probably should be in that title picture as well as he’s been impressive ever since coming to the main roster after WrestleMania last year.

The end of the match kept Neville looking strong as Kalisto countered a german suplex attempt into his Salida del Sol finisher.

AJ Styles made his SmackDown debut against one of the members of the Social Outcasts, Curtis Axel. The match looked a little sloppy, but better compared to Styles’ effort against Jericho on Raw. It’ll definitely take Styles some time to get used to the WWE style inside the ring, which is more of a slow-paced effort than he’s used to. After teasing the Styles Clash at the Royal Rumble and on Raw Monday night, Styles finally hit his signature move on Axel Thursday for the win.

Goldust is looking for a new tag team partner, and he really wants to team with R-Truth. I just don’t think R-Truth feels the same.

• 8-Man Tag: The Usos/Titus O’Neil/Dolph Ziggler d. The New Day and Miz by pinfall after O’Neil hit the Clash of the Titus on Miz.

• Non-Title: Charlotte (c) d. Natalya by submission via the Figure Eight leglock. Charlotte locked in the Figure Four after the match and Becky Lynch came down to make the save.

• Roman Reigns/Dean Ambrose/Chris Jericho d. Wyatt Family by disqualification after Braun Strowman pulled Reigns to the outside and threw him into the barricade.