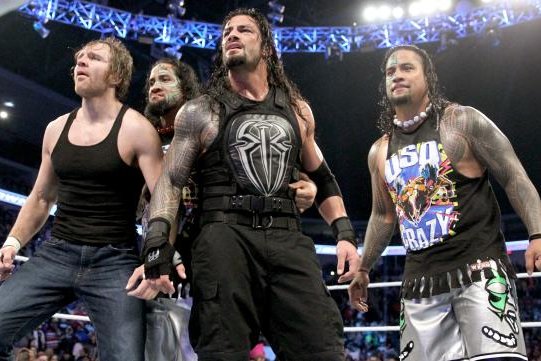 Roman Reigns proved he could take on the entire League of Nations without any help. So, what's next?

Thursday night’s SmackDown emanated from Hershey’s Giant Center just a few hours outside of Philly. And we're only two weeks away from the next pay-per-view, titled TLC. The build to the event has been good, but the shows lately have really lacked star power, so the introduction of at least one new faction on Raw may make for some good television heading into the new year.

The main event, though, left a lot to be desired. I’m not trying to actively bury the WWE product, because they’re effectively doing it themselves.

Roman Reigns, Dean Ambrose and The Usos opened the program with a promo in the ring. Reigns talked about how close he is with his cousins, Jimmy and Jey Uso, and Ambrose. It kind of makes you think this is a new stable now, doesn’t it? I mean, they’re feuding with the newly formed League of Nations, boasting the WWE World Heavyweight Champion, Sheamus, the WWE United States Champion, Alberto Del Rio, the King of the Ring if anyone’s forgotten, King Barrett, and Rusev, so why wouldn’t they be a stable?

The champion and co. interrupted Reigns’ rousing promo and pretty much said nothing. Though, I have to say, Sheamus’ new shirt is fantastic.

The League’s buddies, and the WWE World Tag Team Champions, The New Day, saved the segment and changed the proposed main event of the night from a 4-on-4 tag team match to a 4-on-1 handicap match if Ambrose and the Usos could not beat them in a six-man tag later that night.

I guess we could all see where this is going. I guess. Maybe.

As for the six-man tag, the champions would eke out a victory and force Reigns to fight in the main event by his lonesome against four other guys. Translation: the creative team seriously cannot think of anything better than recycling the same damn thing every damn show every damn week.

We had the second handicap match main event in a row, after Raw was headlined by a 7-on-4 Handicap match. Man, WWE, you talk about cutting edge programming. How about the newly uploaded Smoky Mountain Wrestling episodes on the WWE Network being more cutting edge than WWE television in 2015? It’s embarrassing. It’s lazy. It’s really bad. How does this happen? The creative team just doesn’t care anymore. Monday’s Raw will probably feature an 8-on-2 Handicap match now just because WWE can’t let the streak end there. Anyway, I digress.

So, the odds would be stacked against Reigns in an almost insurmountable way, right? Well, hold that thought.

Le sigh. Reigns overcoming a 4-on-1 match against what should be the top heel faction in WWE right now? This match just killed any heat the League of Nations had for the three days it lived, so there’s really no reason for them to be together anymore. They really lost a handicap match to Reigns like that? First, Barrett was thrown out of the match because he tripped up Reigns, and apparently third time’s the charm? I don’t think I’ve ever seen that happen. A ref banishing a participant in the match? Wouldn’t that just cause a disqualification and hand Reigns the victory? No? Oh, ok.

Eventually, the four men remaining made their way outside the ring, where Reigns made complete dog mush of Sheamus, Rusev and Del Rio. He overcame the three, and hopped back into the ring before the ten count to get the countout victory.

Sheamus would attack Reigns after the match, but Ambrose and the Usos would come down to save Reigns and the program ended in a staredown between the two sides.

I don’t blame Reigns here, but this is the type of stuff that kills any semblance of importance a wrestler individually or a faction altogether has. Sheamus and company are now a joke. And it only took three days for it to happen. Why have them lose? Who cares if they weren’t pinned, they still took the L. For no reason. There’s no reason any one of those guys should be losing at this point. Reigns needs to be made to look vulnerable, but the way WWE goes about it is completely wrong. You know how you build sympathy? You decimate the guy. Show after show after show, until eventually he fights back. And he gets better and better and better. The crowd would probably be more willing to get behind a guy that’s an underdog, but they know Reigns is the company’s pick to replace John Cena. They’re not having it. And I don’t blame them.

The Wyatt Family would make its way to the ring, but not before R-Truth made a cameo after the Wyatt’s video intro played.

Another comedy act? Good. Because we don’t have enough already.

Bray Wyatt would take on D-Von Dudley in a glorified squash match where Wyatt would pick up the victory after nailing D-Von with Sister Abigail.

At the end of this match, Wyatt momentarily made Bubba Ray and Tommy Dreamer, who made another appearance, look weak and pedestrian. Wyatt teased a second Sister Abigail as Bubba Ray pleaded from the outside of the ring not to do it. Eventually, Bubba Ray and Dreamer would invade the ring with kendo sticks, but they would fall prey to Erick Rowan and Braun Strowman, with each Wyatt Family member respectively putting Dreamer through a table and choking out Bubba Ray. Uhm, cool?

So much for @MsCharlotteWWE having her girl's back. #SmackDown @BeckyLynchWWE pic.twitter.com/jGhKz0xlPU

On The Straight Shooters podcast this week, I mentioned how I don’t mind WWE turning Charlotte heel, because she’s much more interesting and feels much more comfortable in that role, I just didn’t agree with the timing of it especially after the angle a few weeks ago between her and Paige and the segment invoking Charlotte’s deceased brother, Reid. Now, it looks more and more like that’s where this is headed.

Charlotte attacked Brie Bella during her match with Becky Lynch because “Brie hit her,” but it clearly planted more seeds for an eventual turn by Charlotte. I’m not sure how they’ll explain it to the audience, but if this means we won’t get a Charlotte-Sasha Banks feud soon over the championship, then that’s not good. Lynch is great and all, but the Divas division needs Charlotte-Banks. Maybe two or three times. Or twenty.

What happens when the creative team can’t find anything for a superstar? They sit around and toil away. But Thursday night may have been the dawn of an excellent new character for a superstar that’s already gone through many during his WWE career thus far.

The creative team may have finally found a great way to utilize The Miz. He confronted Neville backstage after his loss to Tyler Breeze and Miz told him he could make him a star due to his tremendous charisma to go along with Neville’s tremendous ability in the ring. Miz gave him his business card and left him with a copy of a Santa’s Little Helper DVD, of which he is the star alongside Paige. Good work, WWE.

·         Tyler Breeze d. Neville by pinfall via the Unprettier after Summer Rae provided a distraction.

·         The New Day d. Dean Ambrose and the Usos by pinfall via the Shining Wizard from Woods on Ambrose.