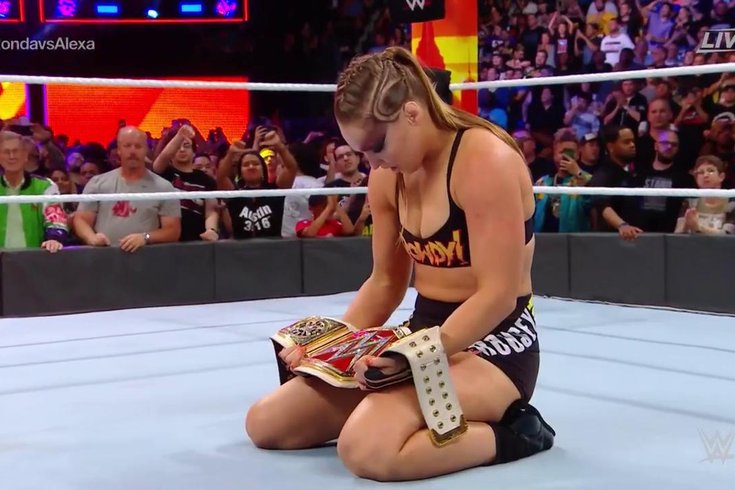 Seen by most as WWE’s second-biggest pay-per-view of the year, SummerSlam’s card seemed pretty stacked from top to bottom, although the build to the event left a lot to be desired. The best build for a match was exactly how it should have been in regards to the Daniel Bryan vs. Miz match, which was the match I was looking forward to the most heading into Sunday night. The eight-year long rivalry, highlighted by a fantastic video package this past week on television, was definitely the match everybody wanted to see once Bryan was cleared for in-ring action earlier this year.

Brock Lesnar defending the WWE Universal Championship against Roman Reigns again wasn’t really hitting the spot for anyone, but WWE decided to go along with it anyway. Was this match finally the end of this rivalry so we could all move on from it? Well, I damn sure hope so.

AJ Styles and Samoa Joe were in SmackDown’s main event vying for the WWE Championship… a decade after they both vied for the TNA Championship with a bunch of five star classics in what’s now known as Impact Wrestling. Would the duo live up to the hype of the WWE scale?

And Ronda Rousey had a shot against the RAW Women’s Champion, Alexa Bliss. Was Rousey able to get her first taste of WWE gold since her debut earlier this year? Let’s get to the action and my takeaways:

I’m not sure why these Cruiserweight matches continue to be on the Kickoff Preshow because fans are not buying that it makes the preshow more appealing. They’re just not. I don’t blame them. This match should’ve been on the main card and slotted between 8-9 p.m. ET to maximize exposure. I’m not sure if WWE will ever begin doing this, but alas, here we are.

I’m over the B-Team, but they are getting over with the crowds, so I can’t be too up in arms about it. I thought The Revival would come away with the titles this time and maybe make the RAW tag team division a little more serious and part of a re-build of sorts, but that wasn’t in the cards this time around. I thought it was a clever way to end the match, with Dawson having the small package, but his partner inadvertently causing the reversal and ultimately helping the champions retain. I’m just ready for a fresh tag team division on the RAW side. They need it desperately.

Once Rollins revealed Ambrose would be in his corner for this match, many thought it would result in a heel turn for Ambrose and an ensuing Ambrose-Rollins feud.

Rollins and Ziggler have put on a series of really good matches in this rivalry. Sunday night’s match was no different. These two know how to work a crowd - unless it’s Pittsburgh. But, to their credit, Pittsburgh isn’t a good crowd, anyway.

The end of the match was hot with Ambrose taking out McIntyre and then Rollins nailing Ziggler with a superkick and stomp to regain the WWE Intercontinental Championship.

I didn’t think Rollins would regain the title here, but I’m glad he did. He’s a workhorse and arguably the best worker on the main roster right now. He definitely deserves the accolades, and I’d love to see him in the Universal Championship picture by the end of the calendar year.

What a waste. It was a good match up until the disqualification. I know due to the WWE Network, WWE has more leeway for pay-per-view finishes, but this wasn’t it. I’m over the Bludgeon Brothers. I like them, but I’m just ready for something different, or have New Day set another record. They’ve consistently reinvented themselves, so I never get tired of Big E, Kofi Kingston or Xavier Woods. Bludgeon Brothers would be better on RAW, anyway.

Big squash. Owens never stood a chance, which sucks because Owens with the briefcase is a hell of a lot more entertaining than Strowman with it.

This match started slow but picked up towards the end. Flair hit Natural Selection on Lynch while Lynch had the Disarmer on Carmella, picking up the victory.

After the match, Lynch and Flair embraced in the middle of the ring before Lynch completely snapped. She slapped Flair across the face and then attacked her outside the ring, throwing her into the guardrail and announce table. The Brooklyn crowd ate this up even though it looked like it was meant to turn Lynch heel. Instead, the crowd chanted, “You deserve it!” to Flair as she laid on the ground, eventually sitting up with tears in her eyes.

While Flair is pegged better as a heel than Lynch, I’m looking forward to seeing how this rivalry develops. Lynch can probably become a full-fledged heel and be booed or it as long as they tell the story right. For now, it looks like Flair’s the heel and Lynch was justified in attacking her for taking the spotlight from her yet again.

In their first WWE tilt, Styles and Joe were showered with “TNA!” chants as their match began Sunday night. It was a nice little nostalgic chant for the two wrestlers who helped put TNA on the map a decade ago.

It was a good match that certainly picked up steam when Joe decided to grab the microphone while standing on the announce table, turned to Styles’ wife and said, “Hey Wendy, I made you a promise daddy was coming home. It looks like he’s not. But I’ll be your new daddy.”

Styles went absolutely ballistic and got himself disqualified after hitting Joe with a steel chair. He approached his wife and daughter in the audience and apologized for his actions.

Another disqualification finish during a title match. It’s WWE’s prerogative to do this because it’s on their own network, but pretty soon, disqualification finishes on pay-per-views, especially during title matches, just aren’t going to fly. This particular ending makes sense in the context of the storyline, but that seems more like an angle ending a B-PPV level match. Not a SummerSlam match. Let’s hope the rematch has a better ending than this one.

The rivalry eight years in the making reached a crescendo on Sunday night in Brooklyn as Bryan and Miz had the best match of the night. I thought they would, and they delivered. Maryse was seated at ringside with her and Miz’s daughter while Bryan’s wife and daughter were not. That proved to be the deciding factor as Maryse slipped Miz some brass knuckles and he popped Bryan with them to get the victory.

This certainly won’t be the only match between these two, and Miz needed a big win against Bryan to cement his legacy as being one of, if not the, best wrestlers in the world the last few years. It’s amazing how far he’s come since the days of me just wanting him to go away. These two have great chemistry inside the ring, so I’m looking forward to seeing how this rivalry plays out.

Bálor came out as his Demon King character for the first time in almost a year. That’s one way to get interest right away for a match that really didn’t move the needle for anyone. Bálor squashed Corbin like Strowman squashed Owens earlier in the night. But, hey, we saw the Demon King.

Not a bad, but not a great match. Hardy went for a Swanton Bomb onto Nakamura on the ring apron, but the champion moved. Then Nakamura hit him with the Kinshasa to put him away.

Hardy mocking Nakamura’s mannerisms were probably the most entertaining aspect of the match.

Randy Orton, who’s had an issue with Hardy, came out after the match and acted like he was going to attack him, but decided against it and walked backstage without doing anything. Okay? Cool.

Natalya came out wearing her dad’s jacket from SummerSlam 1990, which took place at the Spectrum in Philly. Nice touch.

Rousey dominated the match and made Bliss tap out to the armbar in quick fashion. Natalya and the Bella Twins joined Rousey in celebrating her win. This was an important moment for the RAW Women’s Division because with the Evolution pay-per-view coming up in October, Rousey will likely headline the event and is now a champion. I also think some seeds were planted for next year’s WrestleMania Sunday night. I have a feeling both women champions, Rousey and Flair, will meet in WrestleMania 35’s main event. I’ve had that gut feeling for a bit, but I can see that being the direction already.

When the match was about to start, Strowman’s music hit, so naturally everyone assumed he would be cashing in to make it a Triple Threat Match.

Strowman said he’s not a coward to wait until his prey’s back is turned… so he’s waiting until AFTER the match to cash in against whoever wins, and he’s just giving them a heads up. What a guy.

Strowman was chilling on the outside of the ring before a Reigns dive took him out accidentally. Then Lesnar gave Strowman an F5 on the outside and beat him with a steel chair and threw the Money in the Bank briefcase all the way up the ramp, effectively ending that threat. Once Lesnar got back in the ring, Reigns hit him with a spear and pinned him to finally vanquish his foe once and for all.

The Strowman cash-in never came, which was mildly disappointing. They did a good job introducing that into the picture and then getting rid of it, though. The show ended with Reigns standing tall with the strap.

I don’t have an issue with how this transpired. It’s time to have a Universal Champion that’s featured every week on television, so I’m intrigued into seeing this play out for the first time in almost a year and a half. Rollins is also the Intercontinental Champion, so maybe we’ll get some Shield segments full of gold.

I thought it was a good show that highlighted some really good wrestling. It’s really tough to hit on all cylinders when the show is six-plus hours, but this was a lot more entertaining and had some better outcomes than WrestleMania did earlier this year.

I’m digging the Flair/Lynch dynamic, Rollins as the Intercontinental Champion, and seeing where Styles/Joe goes from here. Rousey as RAW Women’s Champion should be good, but does that mean she’ll be on RAW every week now? Hard for me to believe that at this point, but it’s not exactly a negative. She’ll be around a hell of a lot more than Lesnar was.

The creative direction heading into the pay-per-view wasn’t good, but I like where WWE is coming out of it. There are a few things they can play with, and now finally champions - even Rousey - that can appear on television every week.