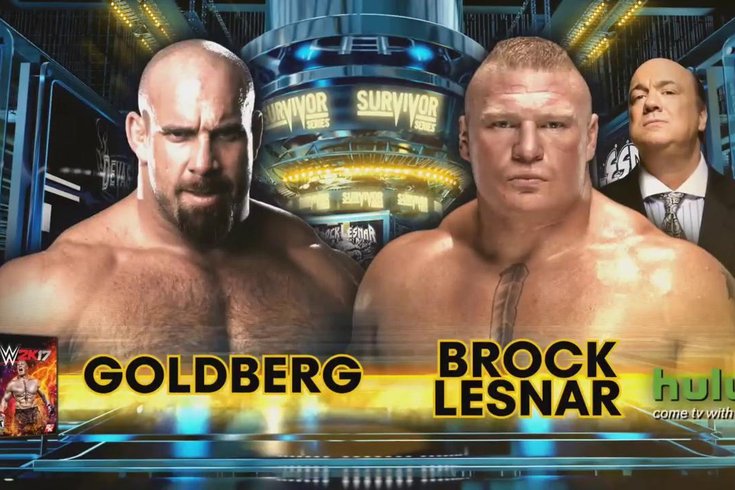 Goldberg makes his in-ring return to WWE for the first time in 12 years on Sunday night as he takes on The Beast.

While I miss the days this pay-per-view event took place on Thanksgiving and Thanksgiving Eve, I still get excited because the event is still considered one of the big ones for the year. This year is no different, as months after Raw and SmackDown split back into their own separate rosters, they’ll be battling for bragging rights in every match Sunday night.

Toronto, Ontario’s Air Canada Centre will host the festivities, beginning with NXT TakeOver: Toronto on Saturday night where Shinsuke Nakamura defends his NXT Championship against Samoa Joe and Mickie James makes her WWE return to take on Asuka for the NXT Women’s Championship.

I’ll have complete coverage of that event right here on Sunday morning. As for the Survivor Series, the event is now four hours long and there may be a couple matches added for the preshow, but I would love for these elimination matches to be long and filled with psychology and storylines. That’d be something different.

Let’s focus on my predictions for what will go down Sunday night.

With Raw being three hours, it made sense to have the division on that show to showcase some of the premiere talent it boasts. However, that hasn’t been the case. There have been good matches, but nothing that has grabbed the audience and give them a reason to care about any of these guys. That’s why the CWC was so great - it gave us all a reason to care about the matches and who was in them.

TJ Perkins wasn’t a great champion, and the whole storyline with Kendrick was really bad. Kendrick is a great talent, but he doesn’t need to be in the Cruiserweight division. They’ve WWE-ized the division and that’s the worst part of it.

Prediction: Kalisto wins and brings the Cruiserweights to SmackDown

I love the fact that Sami Zayn has a chance to become the WWE Intercontinental Champion, but has he lost some momentum on Raw due to the lack of storylines and angles he’s been involved in since his feud with Kevin Owens ended back in the summer? I could see the argument. But he still gets a big pop and the fans love him, so seeing him in a high profile match against The Miz, with gold on the line, is fun to watch.

However, that doesn’t mean he’ll win. I’m a big fan of the midcard championships when they’re utilized in a special manner, and the Intercontinental Championship has been a staple of SmackDown since the brand extension. I doubt Roman Reigns is giving up the United States Championship or being moved to SmackDown, anytime soon. Expect The Miz to come out on top Sunday night. I only wish it was Dolph Ziggler going against Zayn. Yes, that title change was ridiculous. However, I could buy the fact that perhaps WWE wasn’t contemplating Zayn getting a bigger and better reaction than Ziggler - something they might not want - and that’s why they went with Miz winning the title back for the sixth time. Babyface vs. heel, after all, is what makes a good story.

Prediction: The Miz wins to keep the Intercontinental Championship on SmackDown

Both brands’ tag team divisions aren’t anything to write home about, but they’ve drastically improved since the brand split’s second inception back in July. I don’t think the build to this match has been as entertaining as the men’s and women’s matches, but it hasn’t been terrible, either. I’m enjoying watching teams that hate each other work together and then beat each other up. Maybe I’m just immature.

Or maybe I don’t have many expectations for this match. It could be a good one, but this is one fight SmackDown won’t win.

After losing a match to Nikki Bella, Natalya was granted the opportunity by Daniel Bryan to become the coach for the SmackDown women’s team. The women on both rosters have shined and become a prominent portion of each show. I didn’t think having the women on both rosters would boast well for their respective divisions, but overall, I’ve been impressed.

SmackDown’s women’s division has surprisingly been the better one overall, with Raw’s division being more top-heavy with Charlotte, Sasha Banks and Bayley. The storylines have been better on Tuesday nights, however, and almost all of the SmackDown women shine each week. It’s a tough match to pick, but I’ll go with the top-heavy division just because I think WWE wants Charlotte as the clear-cut top woman in wrestling right now. And I can’t blame it.

The ending of Raw that showed SmackDown invading their rival brand before ultimately being shown the door was very good. It was the first time either show “invaded” another one, and we’re only a few months into the latest brand extension. It would be a lot better if something was on the line in this match - whether it’s been said on television or not. Maybe the winning team gets $1 million each? Maybe each member of the winning team gets a title shot against whoever they want? I understand the teams feature three champions overall, but there’s more people without a title, so that would absolutely be an intriguing factor to add.

The whole storyline on Raw where Stephanie says they’re fighting for their jobs doesn’t make a lot of sense. There’s no chance she fires any of them if they lose. It’s very lame and a predictable type of thing to say without anything to back it up or make it seem like it’s reality-based. In this “Reality Era” of WWE, that lacks logical progression and storytelling that nobody - and I mean nobody - takes that seriously.

On SmackDown’s end, Shane McMahon is involved in a match, replacing Baron Corbin. Corbin suffered a “knee injury” during a match with Kalisto last Tuesday and was “pulled” from the show so McMahon could enter. I don’t necessarily think it’s a bad thing even though some think McMahon taking the spot of someone much more deserving is a problem. McMahon is a showman and always shines in matches. It could lead to a big angle during the match, and I don’t think it’d necessarily ruin the match if something big was to happen. Sting debuted in WWE two years ago during the Survivor Series main event, and nobody’s trashing that one.

This does put a shine on WWE’s failure to make big stars, though. Corbin could have shined in this match, much like Strowman can on the Raw side. Strowman’s improved drastically since his debut and Corbin will be a legit star for years to come. I’m not sure what taking him out of the match accomplishes other than a big angle being planned.

Because I believe Raw’s women and tag teams will win their respective matches, SmackDown’s big guns will take home the victory for the blue brand to salvage their night.

The face-to-face confrontation between these two on Monday night really set the stage for how big this match is. The promo was set up perfectly by Paul Heyman, and the reactions by both Lesnar and Goldberg were on the money.

When Goldberg returned to a WWE ring last month, I wasn’t down on it. It’s cool to see Goldberg back in the ring and even though a match with Lesnar isn’t the biggest match in the world, it’s the biggest that could happen right now. WWE made it happen fairly quickly as Goldberg graces the cover of WWE 2K17 and all bad feelings between the two parties are now a distant memory.

With Monday night’s promo, this match truly has a personal feel to it. Goldberg is in incredible physical condition and Lesnar is Lesnar. I expect this to be more evenly matched than matches involving Lesnar have been recently, but there’s no chance, I think, for Goldberg coming out the victor in this one.

You might ask, “Well, why bring him back if he’s not going to win?” Fair point. But it’s Lesnar. Randy Orton made his comeback from a long absence from the ring and Lesnar wiped the floor with him. Sure, Goldberg is different, but having Lesnar somehow lose to Goldberg would likely decrease his value in future main events with WWE. There’s just no reason to have Goldberg win this. Maybe we see a Rocky I-like ending.

Prediction: Brock Lesnar, because picking against him is never a good idea