You're allowed to make mistakes at the Philadelphia Union Academy 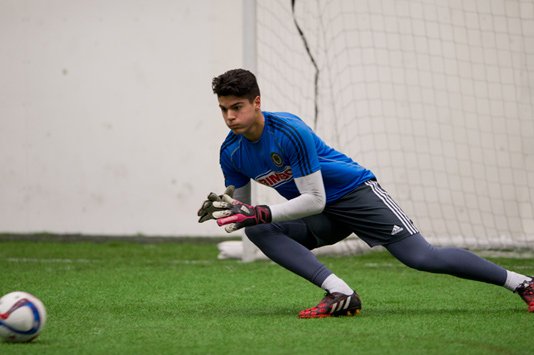 This was the first time that school doors have opened to the public. Media members got a first look at the setup when it starting operating a few years ago, and Maurice Edu's introductory press conference was also held inside the building, which sits across the street from the main YSC complex on Devon Park Drive, just a few minutes from the King of Prussia Mall.

Topically driven by athletic and academic youth development, the panel spoke to a smaller group of VIP members before spending more than sixty minutes in front of a larger audience. In that setting, Stewart offered a lengthy and compelling response to a question regarding the use of metrics in evaluating youth prospects.

"One, this is a great environment, so we're not only creating the soccer player himself, but the athlete behind that person as well," Stewart explained. "In the morning, when they come in, they do the athletics. Then, in the afternoon they practice, and Jim, myself, and the coaches make sure that we see a lot of games. Metrics are, a lot of times – how far can people run? – and all of that, and that's something that we still can work on. But there are certain elements in soccer that you cannot necessarily get a metric behind. Where do they run? At what moment do they run? When do they see the pass? Sometimes, with the metrics and the data that we have these days on passes (being complete or incomplete) – it doesn't necessarily say if a pass was bad, at all.

"The person on the other side is a factor, too. When we look at these games and look at these kids, you see certain elements of what we expect from them. Jim, Tommy, and myself, we've looked at the way we want to play, the playing style, what we expect from these kids in certain positions, and then you can see the extras that they have. It's still, for a great part, (evaluating with) the eye, and seeing and looking and hoping they have the potential."

Continuing with the theme of unmeasurables, Stewart offered a story about the Union's most recent signing.

"The mindset we spoke about; I think that's amazing," he said. "We have an example of Auston Trusty, who grew into the academy, went to Bethlehem Steel, and signed a first team contract. Jim and myself sat down with Auston and told him that he needs to work on his passing. Now, a lot of guys just sit in the locker room, and they'll wait for Jim to come and say, 'let's go outside and pass'. Auston – you talk about self-regulation – he grabs a ball, goes out himself, and asks if Anderson or Fabinho will pass the ball with him. That's the type of player that we want. That mindsight of what they learn is very unique."

2016 was a step forward for the academy, which saw Derrick Jones join the first team along with Trusty. Jones was the club's first homegrown signing since March 5th, 2012. The club's first three homegrown players, Zach Pfeffer, Jimmy McLaughlin, and Cristhian Hernandez, are no longer with the Union and now play in the third and fourth tiers of U.S. Soccer.

Additionally, the academy has regularly graduated future college standouts, the most notable being Keegan Rosenberry, whose homegrown claim was denied by Major League Soccer last winter. The Union were forced to acquire the right back through the Superdraft instead.

Some players, such as Andrew Verdi, have experience training with the Union first team. Others, like Yosef Samuel and Raheem Taylor-Parkes, played for Bethlehem Steel and/or represent the U.S. national team at various youth levels.

.@yscacademy sure knows how to put on a watch party. #WeAreOne

You get the feeling that culture is king at the Union academy, but not in a Chip Kelly-type of way.

You have to take off the training wheels and let these student-athletes be themselves.

"I've only been here for a short period of time, but I was here for graduation," Stewart said. "The part of it, the culture of it, and this is something that we learn, we learn this at our first team facility from what happens at (the YSC academy) – it's believing. Believing in kids is amazing. When I saw all of these kids stand up – and yes they are 18- and 19-year olds – but still, we all have to work on our speech; these kids' speeches, I was blown away. I really was. Everything that they put in there, the thought process, the thanks they had for (YSC staff), it was amazing. The stories they told about where they come from and where they were, it was very touching. This also helps later on in life.

"These kids, they know that there are people behind them who believe in them. What we saw later in the (first team) season, is that when stress hits, people don't want to make mistakes. All of a sudden, it became like a snowball effect, where this guy isn't doing his job anymore, and that guy isn't doing his job anymore. So I'm excited to see what these kids (bring), that come from here, that know that people believe in them, and know that they're allowed to make mistakes. It's normal. The worst thing that can happen when you make a mistake, is that Jim makes a substitution. And this is a big deal for a lot of players, but as long as you can put it in that perspective, I think you'll be in good shape. I'm excited for these kids to come through, and just play through that. And yeah, things might go wrong. Oh well."

Jim Curtin spent time working in the Union youth setup prior to the academy's formal establishment.

"I would just add that 'metrics' is a scary word to use on kids," the head coach said. "I think YSC Academy is more about the individual, right? Every kid learns differently. Every kid has a learning period in the game at a different time. We don't know exactly when that's going to hit.

"I can use an example. I coached the U18 team for the Philadelphia Union, and our best player, that every college scout in the country wanted, who scored a ton of goals, (and helped us win) the Generation Adidas Cup, and everybody said he was the next superstar, (and said) that's the next Landon Donovan – he's a field goal kicker at Penn State and he weighs 300 pounds now. When you say metrics, it's tough, you don't know. He's a great kid and that was his pathway. It's a tricky word. Keegan Rosenberry was on the same team."

Ryan Strauss, host of "The Heart of Sports" on 610 WTEL, contributed to this story.