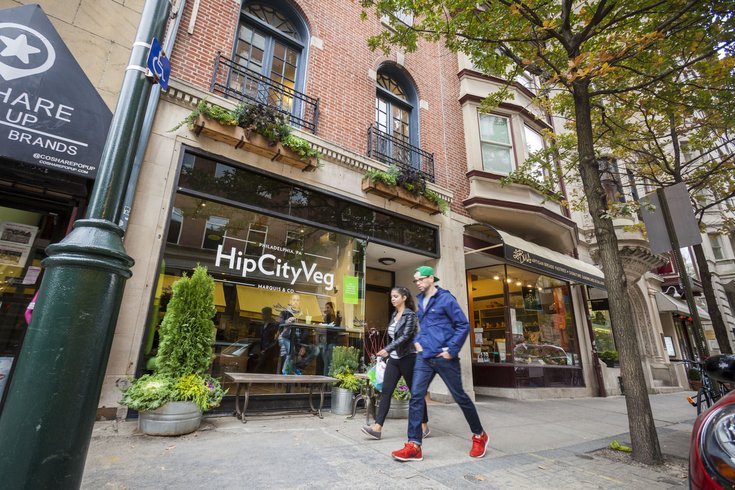 This photo shows the exterior of HipCityVeg at 127 S. 18th St. in Philadelphia.

It's been a good year for Philadelphia's restaurant scene.

Zagat thinks so, at least – the food review website named Philly one of 2016's "Hottest Food Cities" late last month, along with other cities like New Orleans and Chicago.

Philadelphia ranked No. 8 on the list, just below Asheville, North Carolina, and above Charlotte.

Zagat placed Philly at the high-up spot because of restaurants like Dizengoff, High Street and Amada opening up elsewhere and Pizzeria Vetri expanding to Washington, D.C. and Austin, Texas.

Honeygrow and HipCityVeg also expanded to D.C., which helped Philly in its ranking, according to Zagat.

"This emigration of talent hardly slowed down the city’s thriving restaurant scene. Closer to home some of the most intriguing new players have traded in finer dining backgrounds for more homey endeavors like Essen, Tova du Plessis’ new-school Jewish bakery and Philly Style Bagels, a small shop that got sandwich of the year nod from Bon Appetit. Even this year’s more upmarket additions have a casual air about them. ITV, Nick Elmi’s offshoot of Laurel, is a comfortable wine and cocktail bar that showcases the chef’s ambitious creations through a menu of approachable small plates."

Zagat's recognition isn't the only spotlight shown on Philadelphia as of late. Zahav, which is owned by Mike Solomonov, who also co-owns Dizengoff and Abe Fisher, was featured on Eater's "The Best Restaurants in America" list published earlier in December.

OpenTable also released its own "100 Best Restaurants in America," and Philly's Bibou, Vetri and Zahav all landed spots.