Here's why we're all going to get the flu

This season's influenza vaccine is looking to come up short, reports say

In fact, the global epidemic infected about half of the world's population in 1918, killing at least 50 million people. But Philadelphia was the hardest hit place on the planet.

RELATED READ: Philly could get first snowfall of the season this weekend

During the outbreak, doctors tried everything to fight the outbreak, including the ancient art of bleeding patients. Not for two decades did Jonas Salk and Thomas Francis develop the first vaccine against flu viruses in 1938, though it was not available to the masses for another 7 years.

Seasonal influenza epidemics cause between 3 million and 5 million severe cases and 300,000 to 500,000 deaths globally each year, according to the World Health Organization (WHO). The United States reports from 140,000 to 710,000 influenza-related hospitalizations and 12,000 to 56,000 deaths each year. The most susceptible are the very young, the very old, and people with coexisting medical conditions. 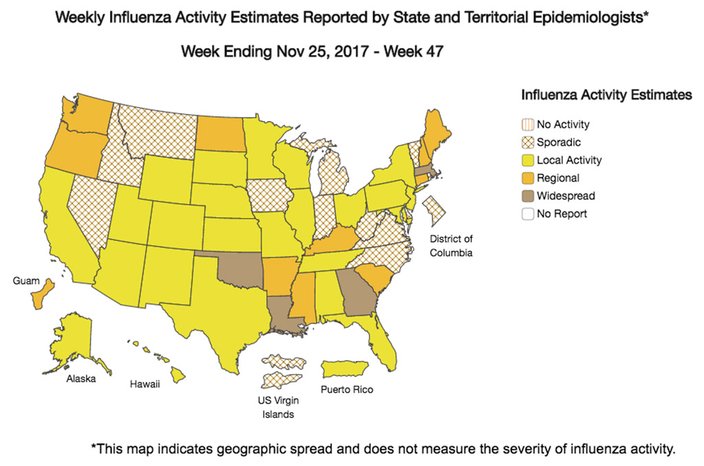 No doubt, the flu vaccine has saved millions and millions of lives over the last 80 years, but it's still a bit of a crap-shoot year to year. That's because the flu vaccine is reformulated annually to contain the strains of the virus most likely to hit folks hard the following year. But it's not an exact science. Strain-specific vaccination can be hit-or-miss even though the WHO's Global Influenza Surveillance Network attempts to forecast which strains look to cause the most misery.

And so word comes from the New England Journal of Medicine that preliminary estimates indicate this year's vaccine is just 10 percent effective against a particularly nasty strain of the virus – H3N2 – that has predominated lately in Australia. It is important to note that the Northern and Southern Hemispheres share the same vaccine composition this year.

Bottom line: it could get pretty miserable around here anytime. Already, the Centers for Disease Control and Prevention are reporting widespread flu outbreaks in Massachusetts, Georgia, Louisiana and Oklahoma.

The Pennsylvania Department of Health is reporting that flu activity is increasing, most significantly in the southeastern part of the state. From Oct. 1 to Dec. 2, a total of 254 confirmed flu cases have been reported in Philadelphia and its four suburban counties, with 80 of those cases in Delaware County.

There has been moderate flu activity in New Jersey in recent weeks, according to the state health department.

Still, health care practitioners say any amount of protection is better than none, so go ahead and get your flu shot, especially if you are one of the most vulnerable to the virus.

Meanwhile, the authors of the NEJM report suggest a renewed effort to work toward better, more effective flu vaccines.

"As we prepare for a potentially severe influenza season, we must consider whether our current vaccines can be improved and whether longer-term, transformative vaccine approaches are needed to minimize influenza-related morbidity and mortality," they wrote.