10 over/unders for the Sixers this season 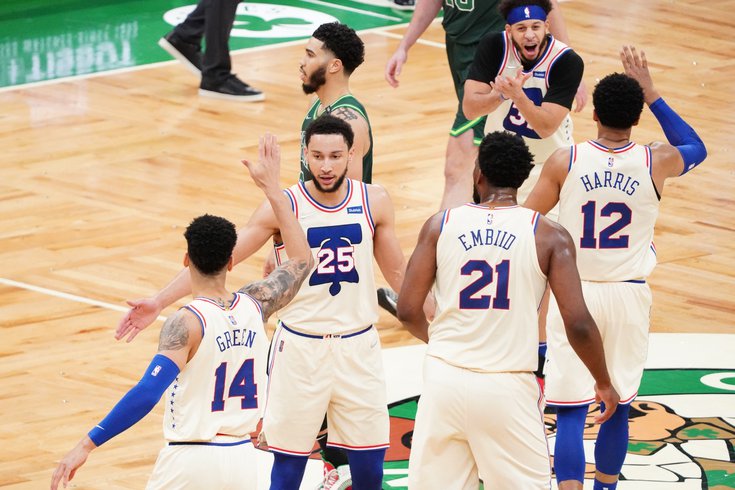 The Sixers, ready or not, are tipping off their 2021-22 season and expectations are, well, mixed, as we wrote earlier on Wednesday.

Is this a team that can compete for an NBA title? Can they even get home court advantage come playoff time? And what on earth are they going to do about Ben Simmons?

There are a ton of burning questions facing this team as it starts Doc Rivers' second season at the helm, and we're going to do our best to help answer them. Below, we've outlined 10 over/under lines — each created completely on our own — that we think are pretty close to what the actual Vegas odds would be if those particular things were handicapped. We're also going to share our own take as to whether we think the Sixers, or the player in question, will eclipse the line we set.

As far as we know, you can't bet on these — well, aside from their win total — but if you could, here's how we think you should lay your money.

The win total posted on most sports books is actually 50.5, but we decided to lower it one to make their over/under total a clean 50. Is this a 50 win team? Really, it depends on what the heck happens with Simmons and how their lineup looks come the spring, after the trade deadline.

However, it is more than possible that a healthy Joel Embiid can carry this team to 50 wins all by himself. But with their 49 wins being tops in the Eastern Conference last year, the Sixers are certainly not better than they were in 2020-21, as the East is arguably a better conference than it was a year ago. Just by a hair, we're projecting them in the high 40s.

Man, I have no freaking clue here. The Sixers are in a pretty tough spot with Simmons, who was suspended for a game Tuesday after refusing to participate in a defensive drill with his teammates. He is pulling out all the stops to try and convince GM Daryl Morey to trade him for peanuts and he might just succeed.

But I don't think Morey is going to blink before the trade deadline approaches. If Simmons wants to make any of his $33 million this year, he is going to have to stop acting like he currently is and suit up. I think he does, for a few games before some other dramatic development probably pushes him to the sidelines again.

We can pencil Joel Embiid in here as one surefire All-Star. Will they have a second? Ben Simmons would typically fill that role but, you know, he doesn't plan to be a Sixer come the All-Star break. Will Tobias Harris earn a nod with a potential increased role this season? Could Tyrese Maxey, Shake Milton or Matisse Thybulle play their way into the upper echelon of players in the season's first half?

I just don't see it — and I expect Embiid to be Philly's lone representative in February.

The top two teams in the East are the Nets and Bucks. The question here is, do the Sixers slot in third? Sidelines.io's Eastern Conference odds have them in there with the third best odds, which would imply a No. 3 seed. But will the Sixers be better than the Hawks, Knicks, Celtics, Heat and other potential playoff teams in the East?

Vegas seems to know better than most, so we'll go just under, putting them in that three seed with all-important home court advantage come May.

Maxey started eight games last year, but that was when, you know, Ben Simmons was an every day starter for Philadelphia. With an early Shake Milton injury putting Maxey in the driver's seat at guard, it'll be up to him to keep his job when Milton is back. Will Simmons play enough to relegate Maxey to the bench all year? Will they trade Simmons for someone who'll wind up being the fifth starter?

This one is way up in the air, but with more than 25 games before the NBA's trade deadline, the thinking here is Maxey starts until the Simmons situation is resolved, either via trade or by him relenting and playing in Philly.

This one is simple, and something that isn't talked about enough. At 6-foot-5, Thybulle has used his long arms and knack for being near the basketball into back-to-back seasons of stellar defense — enough to put him in the conversation for defensive player of the year.

Tied for fifth in steals per game last year, Thybulle was above our 2.5 combined number and we expect him to play more minutes this year, and do more of the same.

Curry is a career 44% shooter from three-point land, and he's been at or over the .450 success moniker four times in his seven-year NBA career. One argument is, that's a very impressive number and hard to maintain, especially with an art as unpredictable as shooting from distance in the NBA. The other is that he's shown he can do it and will do it again.

No reason to doubt Curry here, and the Sixers will be counting on him shooting lights out yet again.

Let's be honest, Ben Simmons was really never the Sixers' second scoring option, so will Harris' offensive production go up with him presumably not playing (or not playing as much)? Harris has been hovering under 20 points per game since joining the Sixers in 2018 but has never eclipsed 19.6 points per game.

A corollary to our prediction that the Sixers will have just one All-Star, a Harris leap forward would be required to give Philly a second rep. Seeing as Harris has scored 20 points per game only once in 11 NBA seasons, it would be a stretch to expect it now.

This is basically betting on whether Embiid will get injured this year. And he's been injured pretty much every year. He's missed at least 18 games in every full NBA season he's played, as he participated in just 51 contests last season. However, Embiid has also been sat out for precautionary and load maintenance reasons over the years as well.

With the Sixers expected to be slightly worse than they have been in recent years in the regular season, and without Simmons to anchor an Embiid-less roster when he needs a night off, there is a chance they call him into service more often in 2021-22 (assuming, of course, that both he is relatively healthy and Simmons doesn't resolve to play for the Sixers).

Last year, the Sixers made one in-season trade, a three-team deal netting them George Hill. They abstained from making further moves despite potential ones being out there. With a Simmons trade more than possible, and other upgrades likely necessary for the Sixers to get themselves where they want to be heading into the playoffs, Daryl Morey could have a very, very busy winter.

We're banging the over here too.

The Sixers haven't advanced past the second round of the playoffs in more than two decades and we don't see it happening this year.