10 players who could interest the Eagles at the Senior Bowl: Defense edition 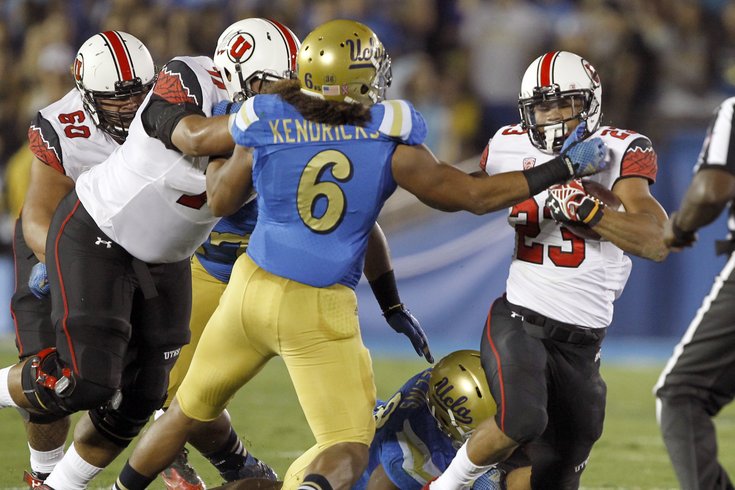 Drummond was part of Michigan State's "No fly zone" defense. He is a cover safety with good size and ball-hawking skills. If the Eagles are looking for safeties who can handle slot receivers a la Malcolm Jenkins, a player like Drummond should be on their radar.

Dupree has experience both as a 4-3 DE and as a standup edge rusher, which will make his projection to the NFL a little easier on 3-4 teams looking to move him to OLB.

Watch his get-off at the snap, and his Connor Barwin-esque hustle in pursuit when the play doesn't go his way against Florida last season.

Dupree is also thought of as a very high character guy, which Chip Kelly seems to value more than most. #Culture.

In 2013 against Florida State, Gunter was locked up against 6'5 WR Kelvin Benjamin for most of the game, and Benjamin only managed two catches for 46 yards, one of which was a 35 yard reception in which Miami was in Cover 2, and he was not in Gunter's zone. The Eagles love big corners, and Gunter is 6'2 with good speed and a willingness to hit.

This is the brother of Eagles ILB Mychal Kendricks. The Kndricks brothers play the same position, and have nearly identical size. Like Mychal, Eric has impressive athleticism. He can cover, he can blitz, and this season he was a tackling machine, leading the Bruins with 145 tackles, or 58 more than any of his teammates.

Here's Kendricks' game against Virginia earlier this season. He's always around the football, and he made two huge plays in this game -- He forced fumble that was a returned for a TD, and he intercepted a pass that he returned for a TD:

The Eagles severely lack depth at ILB, and are likely to address that spot in one form or another this offseason. Kendricks could immediately serve as quality depth and possibly more depending on how well DeMeco Ryans returns from his torn Achilles tendon. However, drafting Kendricks would give the Eagles a pair of undersized  linebackers in the middle of their defense, and I wonder how comfortable Chip Kelly and Billy Davis would be with that.

Kikaha makes all kinds of sense for the Eagles, for the following reasons:

- To begin, he's a highly productive edge rusher who can get to the QB. In 2013, Kikaha had 13 sacks (9 in the last 5 games), 3 forced fumbles, and 15.5 tackles for loss. In 2014, he had 19 sacks and 25 tackles for loss. Here's Washington's bowl game against BYU last year. Kikaha basically ruins BYU's offense, as he beat their LT like a rented mule all day. Watch his violent hands and quickness. He reminds me a little of Aldon Smith.

- He is considered a "high character" guy with outstanding work ethic. #Culture.

- Obviously, at 6'3, 250, Kikaha doesn't have the size to play 3-4 DE regularly in the pros, but I believe he can fill in there a pinch. Look at where Washington has him lined up in a goal line situation. He holds up at the point of attack far better than his size would suggest. 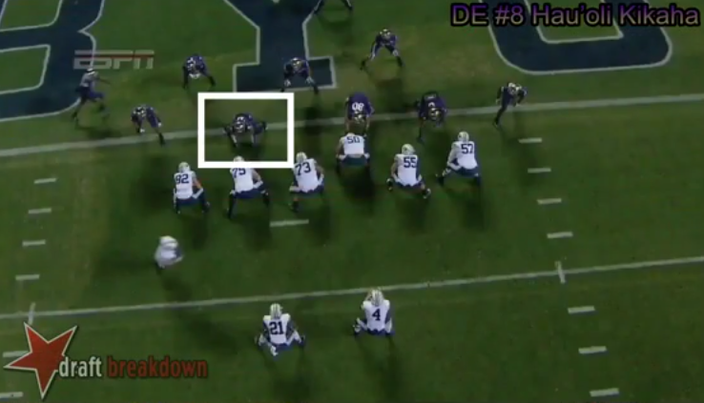 But there is one huge negative -- Kikaha has torn the ACL in the same knee twice. This is an obvious player that Eagles would check out medically before they'd ever draft him, but if he stays healthy this season and his knee checks out in evaluations, Kikaha could be an attractive option for the Eagles at the right spot in the draft.

Like Kikaha, Orchard has put up eye-popping pass rush numbers this season, amassing 18.5 sacks and 21 tackles for loss. He has good size to play 3-4 OLB at 6'4, 255, but mostly plays with his hand on the ground at Utah, which makes his projection to a 3-4 scheme in the pros more challenging.

Why have we profiled three edge rushers already? Well, while the Eagles have gotten surprisingly great play from their OLBs this season, but face decisions on their personnel there this offseason. Connor Barwin is the only sure thing at OLB. Brandon Graham is set to become a free agent, and while he has improved as a more complete 3-4 OLB, his best fit remains as a 4-3 DE. It will be interesting to see if some team backs up the Brinks truck for him to a level where it will be inefficient for the Eagles to try to retain him. Meanwhile, Trent Cole is 32 and will cost over $11 million against the cap in 2015. The Eagles are unlikely to keep him at that figure, and even if Cole restructures, the Eagles will still need to continue adding in depth behind him.

The wildcard of course is Marcus Smith. Is he an OLB? Is he an ILB? Is he good?

Anyway, I went a long way to make the following point… The Eagles may not be done loading up on edge rushers.

Like Eric Kendricks mentioned above, Perryman doesn't have good size, which is doubly concerning for a team like the Eagles who already appear to have a long-term starter in Mychal Kendricks, who is also short. However, Perryman plays big. He a physical tackler who explodes through ball carriers.

Perryman could be a long-term physical presence in the middle of the Eagles' defense if they aren't scared off by his height.

"Bigger people beat up little people," and at 6'2, 215, Prewitt is a very big safety. He also has some ballhawking skills. Over the last three seasons, Prewitt has 11 INTs and five forced fumbles. Prewitt could be a well-rounded big safety to park next to Malcolm Jenkins on the back end.

Rowe started at CB for Utah this season after playing his first three seasons at safety. If the Eagles see Rowe as a CB at the next level, he has the long frame at 6’1, 201 and physical nature against the run that they have prioritized. If they view him as a safety in the NFL, he has versatility to cover receivers, which enables them to stay in their base defense against three WR sets.

Smith doesn't have ideal height, but he can play. In 2014, Smith had just one INT, but he filled up the stat sheet in 2013, finishing second in the nation with seven INTs, while adding eight tackles for loss and four sacks. He also had six INTs in 2012. Here they are:

If you'll notice, he has impressive hands and knows what to do with the ball once he has it. Beyond his ball hawking skills, Smith is a tough player who will mix it up. The Eagles' needs at safety are obvious, as they've been since they let Brian Dawkins walk in free agency six years ago.