10 players who could interest the Eagles at the Senior Bowl: Offense edition

Offensive players Birds fans should keep an eye on 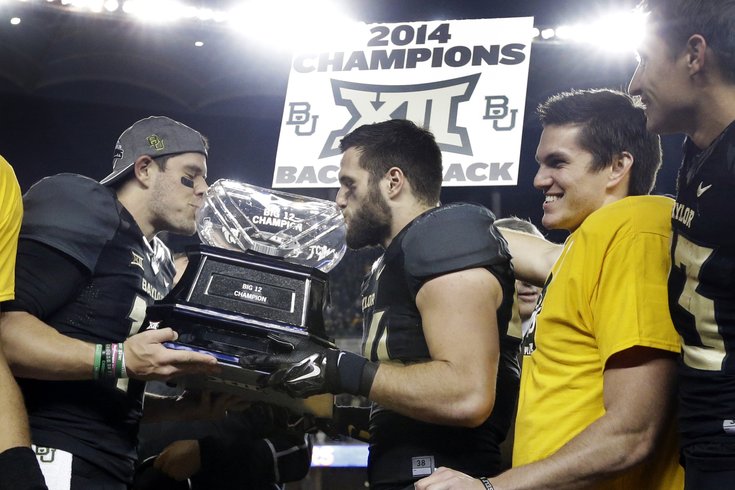 Bryce Petty and a teammate make out with some kind of glass trophy.

As noted earlier, the Eagles have a history of drafting players competing at the Senior Bowl over the last five years. Here are 10 players who could interest them on the offensive side of the ball, in alphabetical order:

The 2015 running back class is potentially going to be loaded with talent, and Abdullah is the most explosive of the backs who will be competing at the Senior Bowl.

Abdullah's ability to run and catch is obvious, but NFL personnel people will want to see how well he can pass protect in practice all week.

Beyond LeSean McCoy, the Eagles have a smaller back in Darren Sproles, who is not built to take on a heavy workload, and Chris Polk, who has not been able to stay healthy. The Eagles could absolutely decide to draft a running back, if the right one is available at a good value.

Anderson is the son of former Rams WR Flipper Anderson. He had a disappointing 2014 season, before getting hurt. When he's healthy he is a speed demon with big play ability, something the Eagles missed at times in 2014 sans DeSean Jackson. Here are Anderson's numbers in 2013, when he played a full season. 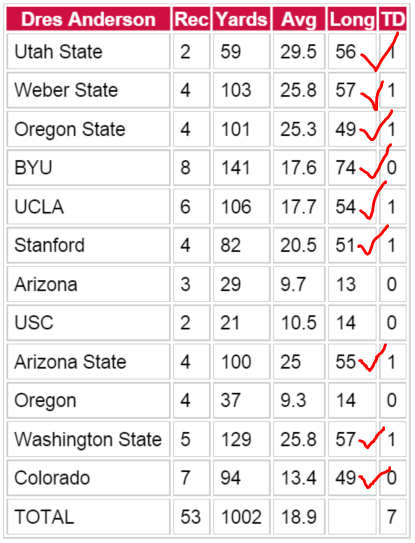 Like DeSean, Anderson has huge moments, but can disappear in games. If you'll note, Anderson had a reception of at least 49 yards in nine of 12 games in 2013. Impressive. With volume catchers like Jeremy Maclin (pending the outcome of free agency), Jordan Matthews, and Zach Ertz, a player like Anderson would make sense for a team like the Eagles who can use more of a big play threat than a guy who will catches six or seven passes per game.

Boyle is a very under-the-radar prospect out of Delaware who was a versatile player for the Blue Hens, lining up out wide, as an in-line TE, and even occasionally in the backfield next to the QB. He also has the ability to long snap. TE isn't exactly a dire need for the Eagles, but at 6'5, 273, Boyle is big, versatile, and the type of player who could fit into Chip Kelly's offense. File this name away.

Like Dres Anderson above, Coates is occasionally invisible, but a big play waiting to happen. Here are Coates' career numbers at Auburn. His production is unimpressive, but note the yards per catch: 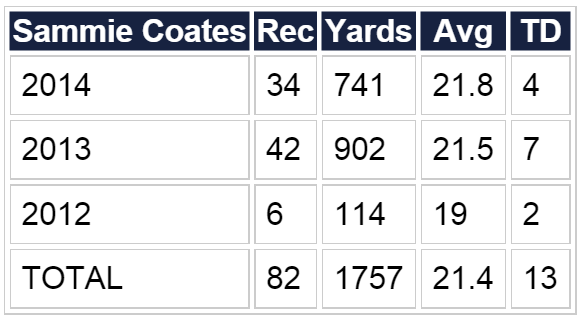 Like Anderson above, Coates can fly. Unlike Anderson, Coates has great size at 6'2, 200, and is a good blocker coming from Gus Malzahn's run-heavy offense at Auburn. Coates is a work in progress, but his size/speed combo is extraordinarily intriguing.

The Oregon connection is obvious, but Fisher is the is the type of athletic offensive lineman the Eagles have collected in recent years. With an aging group along the OL, the Eagles sorely need depth and future starters in the trenches.

Also of note is Oregon center Hroniss Grasu, but with Pro Bowl center Jason Kelce in place for the foreseeable future, Grasu is far more likely to be valued more highly by other center-needy teams.

Goodley has odd dimensions at 5'10, 225 pounds, and he is extremely strong. According to the Baylor Lariat, he can squat 660 pounds, which is ridiculous for a WR. He is built more like a bruising RB than a WR, and that added bulk shows on tape. He is basically like a stronger, faster, thicker version of Josh Huff.

One of my favorite Goodley plays is this catch and run against Kansas State last season. Watch the explosion, and the Heisman-esque stiff arm at the 45 yard line:

Greene has quietly had one of the best careers of any wide receiver in Florida State history, a school that has churned out a number of high draft picks at that position. He has been a contributor in every one of his seasons at FSU since his freshman year, improving his production with each new season: 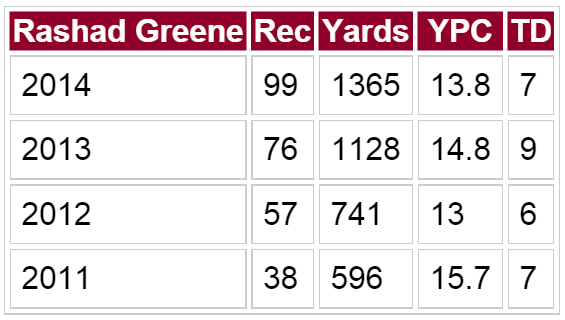 Florida State lined Greene up all over the place. He has good speed and is able to juke defenders in small areas, which makes him a huge threat as a guy who can get yards after the catch. He's also a polished route runner, he's happy to go over the middle to make catches in traffic, he is a willing (although less than awesome) blocker, and he also has value as a punt returner. Basically, he does a lot of the dirty work that Chip Kelly likes from his receivers, although (perhaps generously listed) at 6'0, 180, he does not have good size.

Petty has great size, good mobility, and a decent enough arm to be considered a legitimate early round quarterback prospect at the NFL level. One thing that will scare away some teams, however, is that he operated mainly out of the shotgun in a spread offense for the entirety of his career at Baylor. That may not be as much of a negative in the eyes of Chip Kelly, who of course runs the bulk of his offense out of the shotgun and uses many of the same spread concepts as Baylor.

Over his college career, Petty has thrown 61 TDs and just 10 INTs. However, former Eagles scout and current NFL.com analyst Daniel Jeremiah doesn't see Petty as a first round talent:

"Baylor's Bryce Petty continued to put up huge numbers Saturday, throwing for 510 yards and six touchdowns in an incredible comeback win over TCU. He flashes some incredible touch throws, but he also sprinkles in a handful of throws where he's way off the mark down the field. Even on Baylor's game-winning drive Saturday, he had a chance to make some stick throws and he wasn't close. That's an area where he has to be more consistent.

We all know there's a great demand for franchise quarterbacks in the NFL, but right now, I don't view Petty as a first-round guy. He has a good arm, good size and his intangibles are off the charts, as we saw Saturday when he showed toughness, leadership and poise in helping Baylor overcome a 21-point fourth-quarter deficit.

However, a lot of his offense is based on on-schedule throws. I want to see him play when he has to move around the pocket a little bit and not just be able to lock onto his first read. He had some balls get away from him vs. TCU, and he's not asked to make a lot of post-snap decisions in Art Briles' offense. That part of his game will require close examination from NFL evaluators."

The Eagles obviously head into the 2015 offseason with a serious question mark as to who will be their quarterback both in the short term and long term. Petty may make some sense for the Eagles at the right value in the draft.

White has great size, is a great leaper, wins contested catches, knows what to do once he has the ball in his hands, and blocks well. Stud.

Take a look at all the impressive things White can do in this video of his game against Maryland, when he had 13 catches for 216 yards:

The Eagles are stuck with Riley Cooper through the 2015 season, but a WR trio of Jeremy Maclin (assuming the Eagles retain him), Kevin White, and Jordan Matthews would be extremely difficult to defend. The Eagles would need a little luck for White to fall to them at 20th overall, but he could be in the mix of first round draft pick options for the Birds.