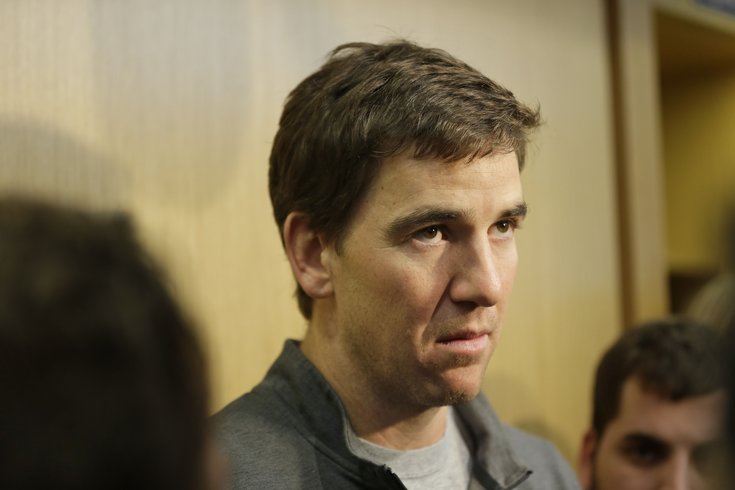 Eli, what do you think of your team's rushing attack, run defense, pass defense, pass rush, offensive line, and coaching staff? Be honest.

This week, all week long, we're taking a brutal look at each of the teams in the NFC East, in detail. The first target was the last place 4-12 Dallas Cowboys.

Today, we'll pick apart the New York Giants. To note, we will not be talking about the positives of any of the Eagles' NFC East rivals, because, well, that's no fun. This will be 100 percent vitriolic. And yes, we'll roast the Eagles, too.

1) What reason have the Giants given anyone to think they'll be good?

Over the last three seasons, the Giants have won a grand total of 19 games. Only seven teams in the NFL have won fewer games over that span.

The Giants are also one of only nine teams with a negative point differential in each of the last three years:

For some reason, there is optimism surrounding this team. Why? Because they overpaid a few guys in free agency? I don't get it.

2) The Giants can't run the ball

Here are the Giants' rushing totals over the last three years:

Is it bad if you can't break four yards per carry in three consecutive years? Asking for a friend.

Of course, we'd be unfair to the Giants' running backs if we put the blame solely on them for the Giants' rushing woes. The RG-RT tandem of John Jerry and Marshall Newhouse are in the "worst RG-RT combo in the NFL" conversation, if anyone is actually having that conversation somewhere.

Also, for the sake of piling on, Ereck Flowers is a RT playing LT.

3) The Giants can't stop the run either.

With four games remaining last season, the Giants, Redskins, and Eagles were all 5-7. The Giants, obviously, were very much in the hunt in the atrocious NFC East. And then their run defense failed them.

Here is where the Giants ranked in various pass defense stats in 2015:

So the Giants are awful at stopping the run AND the pass? That leads us to...

5) Somehow, Steve Spagnuolo is still a defensive coordinator in the NFL.

After the Giants hired Spagnuolo to be their defensive coordinator in 2007, they promptly won the Super Bowl with the help of a defensive front that included Michael Strahan, Justin Tuck and Osi Umenyiora. The Giants defense followed up its Super Bowl year with another strong season in 2008 and Spagnuolo was snapped up by the Rams to be their head coach.

Since then, Spagnuolo's defenses have been brutally bad. Here is where they have ranked in his stops as a defensive coordinator or head coach:

As the chart above shows, Spagnuolo's defenses have finished dead last in the NFL in each of his last two seasons as a defensive coordinator. In fact, the 2012 Saints and 2015 Giants defenses rank worst and third-worst respectively in NFL history for yards allowed in a season.

And yet, Spags was disappointed that he wasn't named the Giants' head coach this offseason. WHAT?!?

Obviously, it's not just scheme that led to Spagnuolo's atrocious defenses. There have to be bad players contributing to that mess. But consider this -- Spagnuolo's 2012 Saints, which, again, were the worst defense in NFL history, improved to fourth in the NFL the next season under the awful Rob Ryan.

6) The Giants' safeties have extreme inexperience.

A big part of the Giants' troubles in the passing game has been the play of their safeties. Second year player Landon Collins is good in run support, but struggles in coverage, as was expected when he was drafted by the Giants in the second round of the 2015 NFL Draft. Opposite Collins, the starter will be one of the following warm bodies -- Cooper Taylor, Darian Thompson, Mykkele Thompson, or Nat Berhe.

The number of career starts for all of those guys? 0.

In fact, barring a signing, or converting a cornerback to play safety, whoever starts opposite Collins will have played no more than 56 career snaps, or less than a typical full game. Collins aside, here are all the players listed as safeties on the Giants' roster, and their career snap totals:

6a) The Giants' linebackers stink.

The other major reason for the Giants' terrible pass defense was their pass rush. The Giants faced the fourth-most pass attempts in the NFL last season, and they only registered 23 sacks, which was good for 30th in the NFL.

Here's a gif of the Giants' woeful pass rush from 2014, when Jason Pierre-Paul still had two hands:

As a result, the Giants panicked in free agency, when they grossly overpaid a trio of defensive linemen.

Olivier Vernon, DE: Vernon was a good pass rusher in Miami, but certainly not among the best in the game. Over his four-year career, he has averaged just over seven sacks and one forced fumble per season.

Damon Harrison, NT: Harrison is a massive 6'4, 350-pound run stuffer. He is a not a threat to get after the quarterback on passing downs, and thus a rotational player, albeit a very effective one at what he does. Harrison is now absurdly rich after signing a five-year, $46.2 million deal. That makes him the sixth-highest paid 4-3 DT in a league full of 4-3 DT impact players who can play the run AND get after the quarterback. Harrison does not do the latter.

Jason Pierre-Paul, DE: And finally, the Giants signed JPP to a one-year deal worth $10 million. Pierre-Paul played in eight games last year and had one sack. It is also worth noting once again that Pierre-Paul only has one hand.

Add it all up, and the Giants handed out contracts worth a total of $141.2 million to three defensive linemen who combined for nine sacks last season. And five hands.

Meanwhile, they lost two-handed defensive lineman Robert Ayers, who led the Giants with 9.5 sacks a year ago, or 41.3 percent of the Giants' sacks.

8) Odell Beckham Jr. is awesome, but he's all the Giants have in the passing game

If you take Odell Beckham Jr. out of the equation, the Giants don't have anyone on their roster who had at least 500 receiving yards a year ago. Victor Cruz, of course, missed the entire season, although it's not as if he's anything close to the player he used to be anyway.

Cruz was amazing in his breakout season in 2011, but as his career has continued, his numbers have declined every season:

Some doubt that Cruz will even be ready to play when the season begins this year.

Since 2000, there were 69 receivers drafted in the second round. Their average receiving yardage totals in their rookie seasons? 366.

Opposing defenses are going to load up on OBJ and dare the Giants to beat them with someone else. I'm not sure they have a guy who can consistently make them pay.

9) The Giants were +7 in turnover differential, and still only won 6 games

The following is a list of teams that were at least +7 in turnover differential last season, and their records:

The 2015 Giants were +43 in points off of turnovers, which was fifth in the NFL. They're like that spoiled kid that has every opportunity but ends up living at home with mom and dad until they're 40.

Sticking with the same theme as the one presented in point No. 9, over the last two seasons, Eli Manning had the best and fourth-best seasons of his career, in terms of QB rating. Over those two seasons, the Giants were still only 12-20. How do you feel about the rest of your roster, Eli?