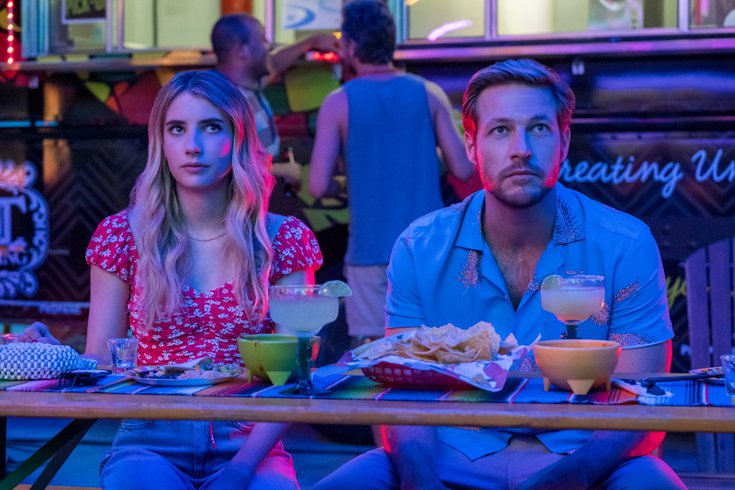 The 12 Days of Netflix Christmas Movies: 'The Knight Before Christmas' | 'The Holiday Calendar' | 'Love Hard' | 'A Castle for Christmas' | 'Holiday in the Wild' | 'Father Christmas is Back' | 'The Princess Switch' | 'Klaus' | 'The Christmas Chronicles' | 'A Christmas Prince' | 'A Boy Called Christmas'

[NOTE: All of what follows comes with the disclaimer that I'm full aware I'm reviewing Netflix Christmas movies and not Academy Award contenders, so when I say something is "a good movie" it's all relative. And as a warning, while some of these movies may be family friendly, this one isn't. As such, this review might be a little NSFW as well, and may also contains some spoilers but, come on, it's a Netflix Christmas movie.]

The plot: Two twenty-somethings who aren't looking for love but for some reason can't stand being alone on holidays — but don't want any actual relationships (or apparently friends) — agree to spend a year together as platonic plus-ones for any major holiday get-togethers.

While it's apparent to everyone around them that they should clearly just date each other, the two refuse to be anything more than casual acquaintances until a series of unfortunately events forces them to finally cave to the fact that they're more than just "holidates."

What makes it terrible: For my purposes here, it was terrible because it was good. There's not a ton to pick apart in this one, as it was actually just a pretty funny date movie, not just a good holiday movie. And part of the job is making fun of just how terrible these movies are, which was not the case here. In fact, I have it replaying right now in the background just to make sure I wasn't deliriously tired the first time I watched it. Nope. Still funny.

I guess my only real complaint is the purpose of a holidate in the first place — or at least in this case how it's used in practice.

So, the entire idea of a holidate is introduced early on in the first few minutes when Sloane (Roberts) is talking to her, let's say, morally flexible Aunt Susan (Chenoweth), who brought a mall Santa to Christmas dinner as her "holidate." (And, yes, they actually say the name of the movie multiple times, which scores bonus points for people like me and Peter Griffin.) Because she doesn't want to deal with the relationship baggage that comes with bringing a significant other to a holiday gathering (or party at a club apparently), she gets single-serving disposable dates that she can take out for the night and perhaps enjoy physically while not particularly caring about them emotionally. That much makes sense.

The next day, when returning a crappy Christmas gift, Sloane meet-cutes Jackson (Luke Bracey) while in line and their argument turns into a discussion about how they could be each others' holidates, but for differing reasons. For Jackson, it's so he doesn't have to deal with another girl making way more of the holidays than she should, as was the case in the opening scenes of the movie. That, and because he believes "humans shouldn't be alone on the holidays." Those motives are strange enough — like, why not just hang out with a friend on the holidays if that's the case, instead of someone you just met? — but Sloane's motives are even more confusing.

When they're first discussing the plan, she admits that she wants to do this to keep her family, specifically her mother and sister, off her back about not having a boyfriend after a semi-recent breakup. So, in theory, she'd bring Jackson as her date and they'd back off. That seems great at first, but both her and Jackson's plans have flaws because they're so wildly different to the holidate philosophy Aunt Susan was employing (and quite successfully, I might add). See, it only works when these dates are one-and-done. But because Jackson continued to show up at each ensuing holiday, Sloane had not choice but to explain to her family what he actually was — and at that point, the veil has been lifted. Why even bother to continue with the charade, since her mom continues to meddle in her love life by forcing her on dates with their new doctor neighbor?

If you can get past that, you'll see that this isn't really a Christmas movie. It's just a romantic comedy that starts on Christmas. But the timeline jumps from holiday to holiday and after the opening scene, we never even officially make it back to Christmas until the (terribly cheesy) end credits. It's certainly a "holiday" movie, it's just that holiday isn't the one coming up at the end of this month.

Finally, my biggest gripe with the movie is that it breaks the NCMU we referenced back in our "Knight Before Christmas" review. On their first holidate, on New Year's Eve, Sloane and Jackson come across a couple that is clearly about to get engaged, but the woman spills red wine on her dress. Sloane runs into her in the bathroom, and it turns out that actress (Mikaela Hoover) is the same one who plays Jimmy O. Yang's sister-in-law Chelsea in "Love Hard." If the man who was proposing to her was the same actor from "Love Hard," that would've been an incredible tie in, alas...

Now that you know that Sloane and Jackson's first holidate is on New Year's Eve, how far into the year do you think they make it before they hook up? Spoiler alert, it's probably not as far as you think. And for some free extra credit, do you want to guess whether or not the sex makes it awkward?

With that out of the way, we can start talking about Emma Roberts, who is great in this movie, especially on Halloween. You'll see what I mean. And Luke Bracey, who isn't as good but as far as male-romantic-comedy-leads-that-I've-never-heard-of go, he was better than expected. There are also a lot of good supporting characters that bring some laughs, from Chenoweth (obviously) to Sloane's brother-in-law (SNL's Alex Moffat) to Jackson's co-worker (Patrick Lamont).

Perhaps my favorite part of the movie was a scene that takes place about 18 minutes in, while Sloane and Jackson are at the New Year's Eve Party. We pick it up in mid conversation, but they sort of address my above complaint about their motives in a way that almost breaks the fourth wall (because it's so spot on) but it doesn't. It goes something like this...

SLOANE: "There's just no way in hell her character would ever do that."

JACKSON: "Who cares? It was funny."

SLOANE: "Uh-uh. It was cockamamie."

JACKSON: "I'm sorry, no one uses that word anymore."

A few minutes later, Jackson is lifting Sloane over his head as the theme from "Dirty Dancing" plays. And that's not the only moment like that in this one, which is appreciated from someone who enjoys a self-aware movie.

It feels weird that the "terrible" section is so much longer than the "good" section for a movie I actually enjoyed, but that's probably because most of what made it good were jokes and good ol' fashioned physical comedy, both of which I'd ruin trying to explain here.

The only thing I'll add here is that my rating would probably be slightly higher if it didn't go off the rails a bit in the end — exactly how I won't reveal, but suffice it to say this movie only furthers my belief that all of these types of movies could stand to be 20 or so minutes shorter. But because it was overall an enjoyable movie, those extra 20 minutes didn't feel nearly as long as they did in, say, "A Castle for Christmas."

Rating: On a scale from a partridge in a pear tree to twelve drummers drumming, I give this nine ladies dancing.