The 12 Days of Netflix Christmas Movies: 'Holiday in the Wild'

In this "Christmas movie," Kristin Davis goes all the way to Africa where she falls in love — with elephants. Oh, and Rob Lowe is there too. 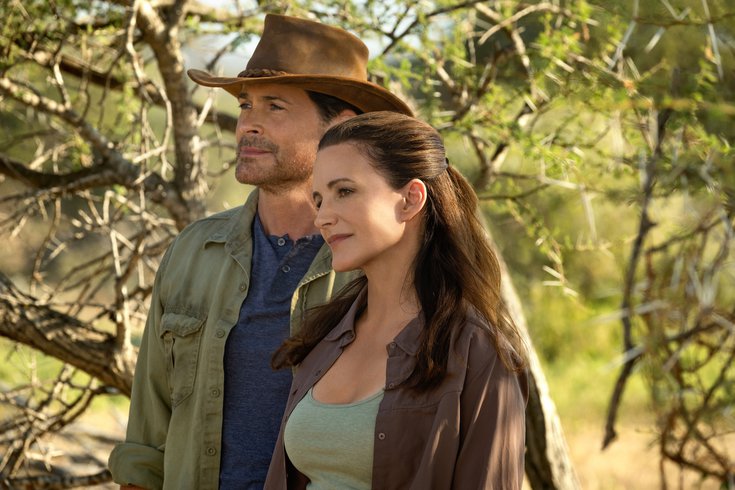 Kristin Davis and Rob Lowe in Netflix's "Holiday in the Wild."

The 12 Days of Netflix Christmas Movies: 'The Knight Before Christmas' | 'The Holiday Calendar' | 'Love Hard' | 'A Castle for Christmas' | 'Holidate' | 'Father Christmas is Back' | 'The Princess Switch' | 'Klaus' | 'The Christmas Chronicles' | 'A Christmas Prince' | 'A Boy Called Christmas'

Tweet-length review: Do you want to watch a Christmas movie or a sexy PSA about wildlife conservation and the diminishing elephant population in Africa? Because you're definitely getting one of those...

You might recognize: Kristin Davis ("Sex and the City"); Rob Lowe ("The West Wing," "Parks and Recreation")

The plot: A rich guy leaves his wife Kate (Davis) the same day their son leaves for college (damn, that's cold), and with nothing else going on in her life she decides to still go on a previously booked second honeymoon to Africa without her soon-to-be-ex husband. While there, she falls in love with elephants and reignites her passion for being a veterinarian. Ultimately, she decides to stay in Africa for a few months to care for the elephant she helped rescue, and finds out that the animals aren't the only thing she's falling in love with. There's also a pilot who looks like Rob Lowe, which is pretty lucky for a soon-to-be-single mom from New York.

What makes it terrible: As we've already established, there are a ton of NCMs that I could've chosen from — and in fact, by limiting this to 12 movies I won't get anywhere close to review all of the Netflix originals — so there was no reason I had to review this movie. I wanted to review it. It was actually one of the reasons this entire exercise started in the first place. When I saw movies like this and "Operation Christmas Drop" (which we'll be reviewing eventually) pop up on Netflix, I knew they were going down the Hallmark/Lifetime route, just with much, much bigger budgets. I was finally going to get the answer of whether it's the terrible plot, writing, directing, etc. that makes those movies so bad they're good, or if it's the no-name actors (with an occasional B-lister thrown in) that really made it hum.

Turns out, it's a combination of both. Because this movie was terrible, but not to the point of swinging the pendulum all the way back to it being good. Davis and Lowe are no Meryl Streep and Daniel Day-Lewis, but they're well-known actors, so the bar is instantly set higher than it probably should be, not unlike it was for the Brooke Shields/Cary Elwes pairing in "A Castle for Christmas." By putting big-name actors in these otherwise low-budget holiday movies — it appears all that Netflix money went to landing the two lead actors — they're kind of setting themselves up for failure when the movie inevitably doesn't live up to expectations.

That being said, we've learned not to bring too many expectations to the table (or couch, in this case) when sitting down to review one of these NCMs. And as it turned out, this barely qualified as that — which we've seen several times so far on our journey to the center of the NCMU. Sometimes, Netflix just decides to set a movie at Christmas time, throw in a few references to Christmas, maybe a party and a few carols, and call it a day. But for the most part, the timing is the most Christmas-y things about them. That was certainly the case in this one (at least the second half of it). In fact, it was more of a 90-minute look at elephant conservation in Africa covered in the glitter that is a pair of attractive actors. Which was totally fine — and a somewhat welcome break from some of our past reviews.

We could knock this movie for a plot that never really makes sense — are we supposed to be worried about the poachers or the nameless foundation (represented by a South African woman with the longest name ever) as the biggest threat to the security of your elephant sanctuary? They make several references to poachers, and it almost feels like they're setting you up for one of their elephants to be killed, but it turns out it's Rob Lowe's sexuality and the fact that he no longer wants to sleep with the woman from the foundation, Ms. Leslie Van De Mere-Jones, that poses the biggest threat. Seriously, has little Rob Lowe been singlehandedly keeping this sanctuary afloat?

Or we could knock it for one of the cheesiest lines we've come across in any of these Christmas movies.

"In Africa, did you meet someone?" Kate's soon-to-be-ex-husband asks upon her return.

Or we could knock this for, say, the fact that Davis' character just happens to be a veterinarian (albeit one that hasn't practiced in years). Or the fact that for most of the movie she doesn't seem very interested in Rob [bleeping] Lowe. Or for the fact that the first half of a "holiday" movie takes place in August/September before randomly jumping ahead three months for a couple scenes that take place around Christmas. Or we could knock if for the fact that after Christmas, Davis' character just up and leaves Africa for no apparent reason, even though she clearly still wants to be there and has nothing in particular waiting for her at home, other than a huge empty apartment.

But we digress. Instead, we'll just say that this is an overall bad movie (and not a Christmas movie) that even one of the most likeable actors in Hollywood couldn't save.

What makes it good: After reading that, you're probably asking, is there anything worth liking? And in fact, there is. Starting with the length, an hour and 26 minutes. We've knocked a few recent flicks for moving too slowly or being about 20 minutes too long. That was not the case here, as the pace of the movie actually moved pretty quickly, which along with the fact that I'm getting write this review is probably the only reason I made it all the way to the end. (It probably won't surprise you to hear that it's quite predictable.)

I also liked the fact that they went out of their way early on to show you that Kate really doesn't have much going on in her life now since she doesn't work and her only child (played by Lowe's real-life son) is leaving for college. Otherwise, I would've spent half of this review wondering how she didn't have anything better to do with her time than chill with elephants in Africa. (Don't get me wrong, what she was doing was incredibly noble, I would've just been wondering how she could afford to be there for all that time.)

And that brings us to the best part of this movie. All the damn adorable elephants. And I know it sounded like I was knocking this movie by saying that it's a 90-minute PSA for elephant conservation — there's even a message at the end to the viewer before the end credits about the diminishing elephant population and urging them to donate — but I actually appreciated that aspect of it.

Finally, I didn't hate the soundtrack, even if it wasn't super Christmas-y (although there was a dope rendition of "Silent Night" by Ladysmith Black Mambazo). The only thing really missing was some Toto. Or perhaps this mashup of "Africa" and "The 12 Days of Christmas."

Rating: On a scale from a partridge in a pear tree to twelve drummers drumming, I give this three French hens.