The 12 Days of Netflix Christmas Movies: 'The Christmas Chronicles'

Kurt Russell stars as Santa Claus in the first installment of a holiday film series that feels reminiscent of some 90s classics. 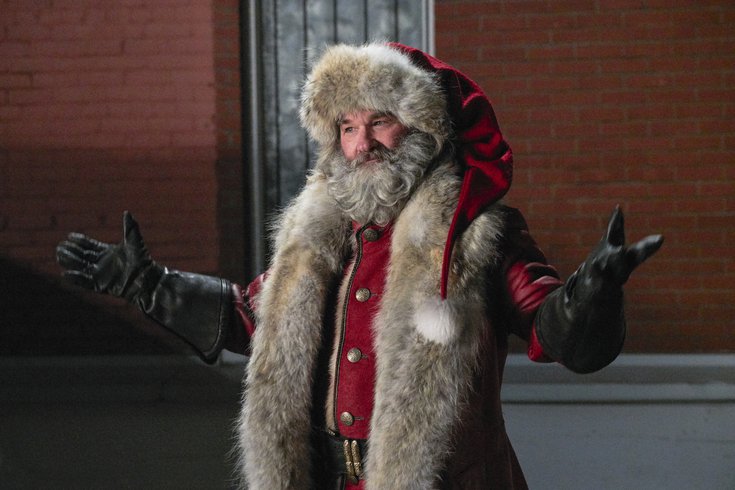 Kurt Russell as Santa in Netflix's "The Christmas Chronicles."

The 12 Days of Netflix Christmas Movies: 'The Knight Before Christmas' | 'The Holiday Calendar' | 'Love Hard' | 'A Castle for Christmas' | 'Holidate' | 'Holiday in the Wild' | 'Father Christmas is Back' | 'The Princess Switch' | 'Klaus' | 'A Christmas Prince' | 'A Boy Called Christmas'

Tweet-length review: Santa nearly kills two children and ruins Christmas for no reason other than to teach an angsty teen a lesson and help make him believe again. Talk about commitment.

The plot: A pair of siblings, Kate (Camp) and Teddy (Judah Lewis), who recently lost their dad (Hudson) are in danger of also losing their Christmas spirit. Until one Christmas Eve, when their nurse mom (Williams-Paisley) is forced to go into work, leaving them home alone as younger sister Kate teeters on the brink of no longer believing in Santa Claus with older, car-stealing brother Teddy more than happy to give her that push. That is, of course, until the two find a video that appears to contain evidence of Santa dropping of a present under their tree.

With mom gone, the pair decides to pull an all-nighter and set some "Home Alone"-style traps in the hopes of one again catching Santa on camera — an actual camera, not an iPhone (I know, right?). Not only do they get him on film, but they also wind up in his sleigh, because apparently Santa delivers toys at 10:30 p.m.

That scares the hell out of Santa and causes him to crash a thousand miles away. In a new city and without the source of his power — his magical hat — Santa and his two new "human helpers" must navigate their way to the North Pole and back, escape from prison and ultimately save the holiday before Christmas spirit drops too low and causes "The Purge: Oh Holy Fight." Seriously. Santa warns the last time he didn't finish delivering presents on Christmas, the Dark Ages happened, which probably says more about humans as a species than it does about the importance of Christmas, but don't worry this isn't that deep of a movie.

What makes it terrible: Overall, there was enough to like about this movie that it makes worth watching — and we'll get in to all that in a minute — but first let's talk about a few of the issues we had.

We'll start with the CGI, because there was A LOT of it in this movie, from the sleigh scenes to Santa's magic powers to the reindeer and even the elves, and it's the latter two where we feel like they really dropped the ball. For starters, we understand the need for flying reindeer to be CGI, and when they were flying or running through the city of Chicago and hopping on police cars, that's absolutely what they should've been. But there was also a scene early in the movie where Kate is meeting the Comet for the first time, and they're so clearly CGI that it immediately takes you out of the world because all you can focus on is the poorly rendered reindeer. The CGI elves are also terrifying, which isn't something you'd expect, but for reasons we'll get into later they actually grow on you after making a bad first impression.

Beyond that, there are a few really cheesy moments in "The Christmas Chronicles" that almost border on cringe-worthy. For evidence, I present this actual scene from the movie in which Santa is locked in jail and conjures up instruments for all his cellmates — including Steven Van Zandt — for an impromptu concert but for some reason can't produce a key or some other way to escape?

Beyond the inconsistent Christmas magic on display there (which they later explain away) that's just a tough watch. Kurt Russell was overall good in this one, but not here. And the worst part is that it was totally unnecessary — they simply could've just deleted this entire scene from the movie and it still would've worked just fine. In fact, it would've been better.

What makes it good: We just alluded to it above, but Kurt Russell was Kurt Russell in this one. And by that we mean he was funny and likeable and even though he might've looked like Diet Santa — perhaps from his decision to lay off the Ho Hos — he was one of the better Santas I've seen in recent year. It was reminiscent of Tim Allen's version from "The Santa Clause," which is to say there was something sort of everyman about him, even though he's this magical being. In fact, there was a lot about this movie that felt like that 1994 classic both in its sense of humor, its action sequences and the general sense of nostalgia it evoked. It reminded me of the holiday movies I watched growing up, like "Home Alone," "Jingle All The Way," and "The Santa Clause." Perhaps it's not a coincidence then that those first two movies, along with "The Christmas Chronicles," were all produced by the king of Christmas movies, Chris Columbus.

[NOTE: Speaking of Kurt Russell, if he's Santa, and his real-life wife Goldie Hawn is Mrs. Claus, and her real-life son Oliver Hudson is Doug (Kate and Teddy's dead dad), does that mean....? I guess we'll have to watch the sequel. 😉]

Darby Camp and Judah Lewis were fine as Kate and Teddy, but it was really a whole-is-greater-than-the-sum thing. Separately, they were just OK, but when they were on screen together, there was something about the brother-sister dynamic that rang incredibly true (and this is coming from someone who only has one sibling, a sister who is a few years younger).

But the best part of this movie, aside from the overall "vibe" that felt like Christmas movies of my childhood, was the humor. It wasn't side-splitting funny by any stretch — and we already mentioned that there were some beyond cheesy moments — but there were some funny gags as well, like the running joke that Santa has a body-image problem and gets really angry that he's constantly portrayed as fat. The interactions with the police officers (Lamorne Morris and Martin Roach) were also great, jailhouse concert aside.

And then there were the elves, who we mentioned in the terrible section because that was honestly the initial reaction to their on-screen appearance. But that quickly changed as the elves turned from cute and precocious (but horrifying in their own way) to just simply horrifying, but in a hilarious way, with them attacking people and appearing ready at one point to cut Teddy's manhood off before Kate called them off. They were kind of like the penguins from "Madacascar." Or, perhaps more appropriately, the Woodland Critters from the "South Park" Christmas episode. One minute they're talking in their cute voices, the next minute they're ready to rip your head off and, well, we'll just leave it at that. Those were the parts when the elves were at their best, and we're glad the leaned into it.

Oh, and you know how we've been complaining a lot about some of these Christmas movies not actually being "Christmas" movies? Well this is not one of them. And for that simple fact, it gets bonus points in my book.

Rating: On a scale from a partridge in a pear tree to twelve drummers drumming, I give this nine ladies dancing.