The 12 Days of Netflix Christmas Movies: 'The Knight Before Christmas'

Vanessa Hudgens takes a break from 'The Princess Switch' to star in a different holiday movie and throw a wrench in the Netflix Christmas Universe. 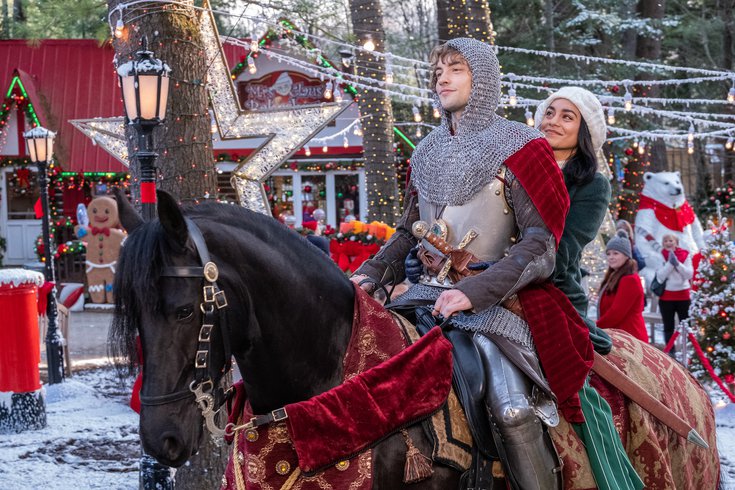 Josh Whitehouse and Vanessa Hudgens in "The Knight Before Christmas"

Sure, since binging movies is something you do in the privacy of your own home — and don't worry, we're not here to shame your movie choices — you could technically watch Christmas movies any time of year and no one would be any the wiser, except for maybe when you get caught singing "Winter Wonderland" while shopping at CVS in April. Not that I'm speaking from experience or anything.

The Christmas movie is a time-honored tradition, and they run the gamut from incredible classics like "A Christmas Story" to more recent favorites like "Elf." There are dramas, tear-jerkers, laugh-out-loud comedies, animation, stop-motion, musicals — even action thrillers — so there's likely a Christmas movie out there for you, even if you don't celebrate the holiday yourself. That's especially true if we broaden the definition of "Christmas movie" to include titles like "Die Hard," but that's a whole different story for another day.

The 12 Days of Netflix Christmas Movies: 'The Holiday Calendar' | 'Love Hard' | 'A Castle for Christmas' | 'Holidate' | 'Holiday in the Wild' | 'Father Christmas is Back' | 'The Princess Switch' | 'Klaus' | 'The Christmas Chronicles' | 'A Christmas Prince' | 'A Boy Called Christmas'

But for this exercise, we're going to stick to Netflix originals. And we're going to review them. Not all of them, but 12 of them (technically more since we'll be grouping a couple of trilogies together) over the next few weeks as we present to you the 12 Days of Netflix Christmas Movies. So sit back, grab a cup of hot chocolate (or spiked eggnog if you prefer) and let's get started...

THE KNIGHT BEFORE CHRISTMAS (2019)

Tweet-length review: "Two hours, two hot cocoas and yet nary a quest in sight." That's both a quote from the movie and how I felt after watching it.

The plot: A 14th century knight named Sir Cole (Josh Whitehouse) is transported to the year 2019 by an old witch in order to complete his quest before Christmas so that he can become a "true knight." Unfortunately, he neither understands 21st century life nor knows what his quest is ... or why he has to go to the future to fulfill it. But fear not, on his first night in small-town Ohio, he gets hit by local teacher Brooke Winters (Hudgens) while crossing the street — you know, because he doesn't know what a car is.

Despite him wearing full armor (which honestly may be the only reason he survives) and carrying a sword, and having no form of identification, she invites him to stay with her while he recovers from the accident, believing that him thinking he's a knight from 1334 Norwich is simply a case of amnesia. Did we mention she lives alone? Luckily it worked out fine for Ms. Winters this time, but in an alternate version of this movie, there's a substitute at her desk the next morning when her students show up to class.

From there, Cole does what knights do best and goes around town performing chivalric duties in the hopes that each one will fulfill his quest by his Christmas deadline. That includes helping Brooke's sister (Chriqui) find her lost daughter and offering to string up and dismember a teenage pickpocket he catches in the town square, all while never giving up hope that he might be reunited with his horse (lover?) Sherwyn. In the end, Cole learns that his real quest was the Hudgens he met along the way.

What makes it terrible: As far as shitty Netflix Christmas movies go, there's not a ton of bad here. I mean, you basically know what you're getting into just based on the terribly punny title. And, sure, the plot meanders for 90 minutes while Cole tries to figure out what his quest is rather than actually trying to accomplish it — even though it's abundantly clear to the viewer that falling in love is the quest — but there are enough funny moments throughout to distract you from that fact. Watching people from the past try to figure out modern technology is almost always funny, and you can waste a lot of time wondering how long Cole is going to survive without any immunizations.

That being said, if we want to get picky — that's why we're here after all — we could point out the fact that the entire premise of this movie makes absolutely no sense. Not to get too deep in the Old-Crone-In-The-Woods weeds here, but when Cole stumbles upon the witch, she sends him to 2019 and the only way he can get back is by completing his quest before Christmas Day. Cole does so by falling in love with Brooke. And then is immediately transported back to 1334 — a full 650 years before his true love is born? What the hell? What was even the point of all that? Why would that be his quest? And why the hell did he need to go to 2019 to fall in love? Were there no women in the 1300s? Or was it because they didn't have a choice back then?

[Note: They actually try to explain that he did have a "fair maiden" back in the 1300s but he could not be with her until he fulfilled his quest. And yeah, I could see how that's difficult since his quest is falling in love with another woman.]

Anyway, if you can get past that — and if you're OK watching a movie about a time-traveling knight in the first place then you probably can — then this isn't the worst way to spend 90 minutes.

What makes it good: First, while this isn't even in her Top 3 Netflix Christmas movies (we'll get to those in a bit), Vanessa Hudgens is always great. And although I didn't know who Josh Whitehouse was before this, he was actually quite funny — him adjusting to life in the future (present?) pretty much made the movie.

Beyond that, this movie hits on ALL the Christmas movie tropes.

Perhaps the best part of this movie is that it helps establish the NCMU (Netflix Christmas Movie Universe). That's right, there's a cinematic universe here because if you thought Netflix was afraid of a little cross promotion then you must be new to these parts. Anyway...

While decorating the tree, Hudgens' character makes a reference to an ornament her parents got her in Aldovia, which is the fictional country in Netflix's "A Christmas Prince" trilogy (which we'll review later in this series). But wait, there's more. Remember when we said this wasn't in Hudgens' Top 3? That's because that honor belongs to the "Princess Switch" trilogy, the third installment of which came out earlier this year (and will also be getting reviewed shortly). In that series, Hudgens plays — wait for it — three different versions of herself, none of whom are somehow sisters. And in the second "Princess Switch," the couple from "A Christmas Prince" makes an appearance.

If that's all a bit confusing, all that matters is this: it basically confirms that all seven of these movies ("The Knight Before Christmas," "The Princess Switch" trilogy, and "A Christmas Prince" trilogy) all take place in the same universe. And that means there are at least four Hudgenses running around out there.

There's also a reference to two other NCM in the scene where Sir Cole and Brooke binge movies. There's a clip of "The Holiday Calendar," which we'll review on Friday and "Holiday in the Wild," which is one of the NCMs we'll be reviewing that I actually haven't seen yet. It looks really bad.

Rating: On a scale from a partridge in a pear tree to 12 drummers drumming, I give this eight maids a-milking.