The animated feature film was nominated for an Academy Award and features a cast that includes Jason Schwartzman, J.K. Simmons and Rashida Jones. 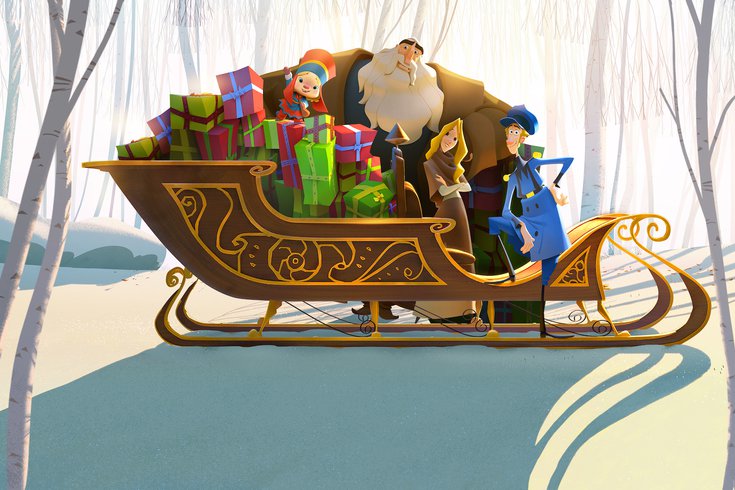 Netlix's "Klaus" was nominated for an Academy Award and (rightfully) won several other prestigious awards.

Tweet-length review: Ever wonder what it would be like if Ron Swanson was Santa Claus? Then this movie is for you. Just don't get too attached to the big guy.

You might recognize: The voices of... Jason Schwartzman (from have you ever seen a Wes Anderson movie?), J.K Simmons (from making Miles Teller cry in "Whiplash"), Rashida Jones (from "The Office" and "Parks and Rec"), Norm Macdonald (RIP), Joan Cusack (from "Working Girl," "In & Out" and being John Cusack's sister), and Will Sasso (from "MADtv" and that one scene in "Happy Gilmore")

The plot: In a world where the postal service reigns supreme, Jesper Johanssen, a trust-fund f-boy and the son of the uber-wealthy Postmaster General, gets assigned to frigid and far-off Smeerensburg as a punishment from his task-master father for slacking off in postman school. He has one year to post 6,000 letters out of a land that hasn't had a functioning post office — or the need for one — for as long as time remembers.

While there, Jesper discovers that Smeerensburg is less like the places he remembers and more reminiscent of the Five Points neighborhood from "Gangs of New York," as the town is split into two warring clans, the Krums and the Ellingboes, who do nothing but fight with and play tricks on the other. While trying to find someone — anyone — to send a letter, Jesper is told to pay a visit to a mysterious old man, a toymaker named Klaus, who lives outside of town. Klaus, after much convincing, begins making toys for any kid who writes him a letter, letters that Jesper is more than happy to deliver so long as the children include the necessary postage.

Even though this was not Jesper's intention — he simply wants to complete his assignment ASAP so he can return to his "silk sheets and breakfast in bed" — his actions have unexpected positives consequences. The town's children not only start attending school so they can learn to read and write their letters, but their new-found toys also start bringing kids from both sides of the centuries-old clash (that no one can really explain the origins of) together in a way that starts to bother the parents, who for some reason don't want the fighting to stop. However, in order to take down Jesper and Klaus and return Smeerensburg to a state of civil unrest, they call for a temporary truce and devise a plan to expose Jesper's true motives — to hit his quota and get out of Dodge — even though over time Jesper's motives, as tends to happen in situations like this, have changed. Will Klaus, Jesper's love interest Alva and the children of the town be able to see through the deceptions of the Krums and Ellingboes and forgive Jesper? What do you think?

What makes it good: There's so much to like about this one, so much so that we've decided to change up the order here and go with the good first before the bad (you'll see why in a minute). And we clearly aren't the only ones who enjoyed this movie. Not only does it have a 94% critic rating (and 96% audience score) on Rotten Tomatoes, it was also nominated for an Academy Award. And not like, best soundtrack or best editing or something, but the big one: Best Animated Feature (of 2019). It lost to "Toy Story 4," but it did pick up plenty of other hardware along the way.

And honestly, it was all well-earned praise for writer/director/producer Sergio Pablos, as this movie has all the makings of a holiday classic.

For starters, it's an actual Christmas movie. So far in this journey, we've often lamented that too many of these Netflix "Christmas" movies are just regular movies that happen to be set around Christmas time. Christmas is neither central to the plot or the themes of the movie. In "Klaus," it's everywhere, but it's also nowhere at the same time. In fact, Christmas isn't really mentioned until the end of the movie, but it's silently hanging over the Smeerensburg landscape. For example, it's not a coincidence that Smeerensburg is located all the way at the top of the map, you know, like the North Pole. Klaus, is clearly representative of Santa Claus, even though he doesn't wear the big red costume really at all.

Instead, you get a brand new origin story for the big guy, and more importantly an origin story for some of the weird traditions that surround the Santa character, like why we hang stockings and why bad kids get coal. More importantly, it tells the story of why Santa, or in this case Klaus, began delivering presents in the first place, something that obviously isn't inherent to the religious Christmas tradition. And according to this legend, that tradition started independently, and then was applied to Christmas, not the other way around.

While there are plenty of other reasons to add this to your list, the greatest joy of watching this movie was seeing how they explain some of these odd Christmas traditions. We mentioned the coal and stockings, but they also touch on why there are reindeer, why people think they fly, who the elves "really" are and almost every other Christmas mystery you can think of.

Beyond the plot being adorable and a very fresh take on the genre, there are numerous other things to like about this one. There's the cast, featuring a lead actor in Jason Schwartzman who's last name might not suggest he'd be the best fit for the protagonist of a Christmas origin story, until you remember the main character of the first Christmas origin story was also a Jew. And, like Jesus, Schwartzman delivers. One of the things that's nice about a voice actor is when you can hear their character's transformation in the voice, and I think he nailed that part of it. Rashida Jones, J.K. Simmons and the rest of the cast are also great, including Norm Macdonald in limited screentime.

On a related note, there's the (often dark) humor throughout "Klaus" that is both a product of the writing and the talented actors mentioned above. Humor in animated movies, especially holiday themed ones, can be a fine line between funny and cheesy, but skewing toward black comedy is always a way to play it a little safer. There was plenty of the slapstick comedy you'd expect from an animated feature, but right from the time Jesper arrived in Smeerensburg and you saw little kids stabbing a snowman with sharpened carrots, you kind of knew this one was going to be a little darker. And in this case, it was the perfect balance to holiday themes.

Finally, we can't not talk about the animation, which was hand drawn and absolutely exquisite. It looked more like a classic Disney film than a newer Pixar or DreamWorks movie, yet somehow didn't look dated in the least. More movies should have this vibe. As someone who has seen "The Polar Express," this was a welcome change.

AND NOW, A MAJOR SPOILER ALERT BEFORE CONTINUING.

What makes it terrible: I don't want to spoil anything for you, but they kill Santa. They straight up f***ing kill Santa. You think it's a happy ending and then — BAM! This guy just vanishes like Keyser Soze at the end of "The Usual Suspects." No real explanation, just the vague suggestion that his spirit returns to visit Jesper every Christmas, which ... cool, I guess?

I was all ready to say this was a pretty perfect movie as far as holiday films go, then this catastrophe. I don't think I've ever seen a children's Christmas movie end with Santa dying*, but here we are.

*I'm not counting "The Santa Clause" here because that movie starts with Santa dying and is about a new Santa taking his place. That's a very different thing than ending with the big guy walking off into the woods like he's being put out to pasture.

OK, jokes aside, I know they really don't "kill" Klaus at the end of the movie, but he does die. And yes, he goes to be with his dead wife, but you try explaining that to your little kid. It's definitely an ending more geared toward adults than children, and that's really my only issue here. That being said, there was a lot in this movie that was geared toward adults, since little kids don't really need the cute explanations of how Christmas beliefs came to be. They simply... believe. And in that sense, this was a much more adult movie than I perhaps gave it credit for on first viewing. Is it one that kids will enjoy? Almost certainly — and there are plenty of lessons for little ones to take from this, but the movies biggest lessons are for the adults in the room.

Let's stop here, because the more I talk, the closer we get to going full circle and talking about all the good things this movie had to offer.