The 12 Days of Netflix Christmas Movies: 'A Boy Called Christmas' 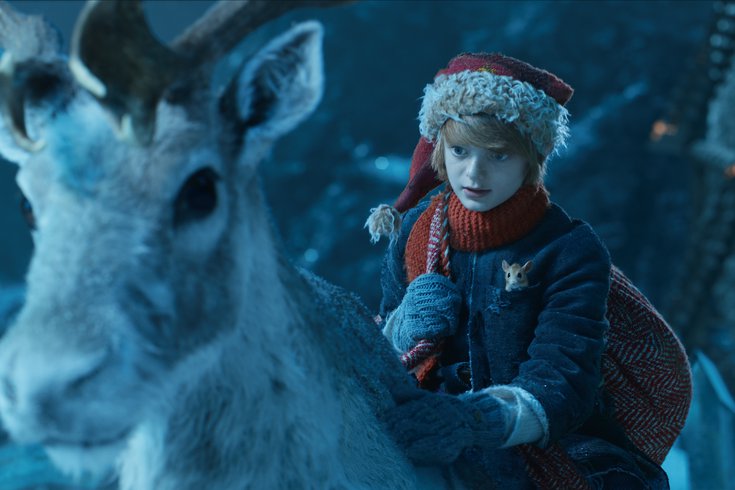 Tweet-length review: You might think Santa's background is all sugar plums and elves, but this origin story is here to let you know things weren't always so holly jolly for the big guy. At least not until he found a little Christmas magic.

The plot: A young boy named Nikolas (Henry Lawfull) lives in the woods of Finland with his father, Joel (Huisman), a few years after his mother was killed by the bear that roams the woods outside their house. A bleak start, I know, and it's only going to get worse before it gets better.

With morale down throughout the kingdom, the unnamed King (Broadbent) calls a meeting of the best and brightest in the land, not to figure out how to fix the many real-world problems that plague his people, like poverty and hunger, but rather to implore them to go out to the farthest reaches and bring back something (anything) that will inspire hope again. For Joel and his comrades, that means traveling to the mythical land of Elfhelm, of which Nikolas's mom told him the story each night. Joel sets off, leaving Nikolas at home alone with his mean sister (Wiig) until Nikolas finds a map to Elfhelm hidden in the stitching of his dad's hat. So he — and his talking pet mouse Miika (Merchant) — set out on their own journey to Elfhelm to try to give the hat back to his dad and help him find the traditionally impossible-to-locate town.

Along the way he encounters dangers makes new friends, only to find out upon his arrival that there's something rotten in the state of Elfhelm. And it turns out the real journey isn't finding Elfhelm, but bringing them the same hope the King wants restored to Finland. Can Nikolas prove to the elves that all humans aren't bad and make it back home with a little magic and hope? Oh, we have a feeling he'll do more than that.

What makes it good: If you've been following along with me on this Netflix Christmas expedition, first, let me say thank you. I hope you haven't watched all of these, because there were some stinkers, but I also hope you had a little bit of fun and a few laughs along the way (and that my deep dives into the NCU didn't make you question my sanity any more than I already question it myself). Returning readers might also notice that it's a little unconventional for us to be starting with what makes this movie good, but for our purposes that's usually an indication that the movie was actually quite good — and that's certainly the case here.

I flipped back and forth over how I felt about this movie throughout watching it, but an incredibly strong third act really drives home what is otherwise an already good Christmas movie full of original ideas, great actors and stunning visuals. It's also really cute and brings some humor to the table as well. When it comes to a great Christmas movie, that's pretty much the recipe. The only other thing is that it actually has to be, you know, about Christmas. And there's no denying that's the case here.

In that sense, it reminded me a lot of a live-action "Klaus." Christmas was everywhere, from Nikolas' hat to the elves and reindeer, but throughout much of the movie there wasn't a ton of Christmas, perhaps because we were watching the holiday traditions we all know and love come to life right before our eyes. I think "Klaus" was a little better at having fun with the origins of some of those traditions, but "A Boy Called Christmas" did it in a different way that worked quite well for the story they were telling, one about the power of hope and recognizing that what makes us different doesn't necessarily make us bad.

Right from the start, you get a shot of Maggie Smith walking down an incredibly British snow covered street, and the entire story of "A Boy Called Christmas" is told through a bedtime story she is telling the three children she's babysitting — three children who, like Nikolas, also recently lost their mother. When you start with Smith narrating your story, you know you're in for a treat. In fact, the level of talent of the actors in this one is off the charts. Smith, Broadbent, Wiig, Huisman, Jones and even Stephen Merchant (as the voice of Miika the mouse) all deliver in this one, taking this from a good Christmas movie to a very good one.

Adding to that is the acting of young up-and-comer Henry Lawfull, who played Nikolas in what IMDB says was just his first movie role. And he was very good — honestly, you'd have no idea he wasn't a seasoned actor as he held his own throughout with some of the best in the business. We'd be remiss if we didn't mention him specifically here.

If the acting takes this movie from good to very good, then it is the visuals that take this from a very good Christmas movie to a great one. Just the overall visual esthetics of the Finnish woods and Elfhelm are amazing, but that doesn't even account for all the great special effects. Where in others, like "The Christmas Chronicles," the CGI took away from the film, here it only added to it, perhaps in part because that overall esthetic already put you in a place that felt a little detached from reality. And they used it masterfully, from the shadow-dancing scene in the beginning when Joel first tells the story of Elfhelm to the transitions from scene to scene, specifically from Maggie Smith narrating in the real world to the imagined one she's describing.

One more thing to add here: one of my favorite parts of this movie was the Truth Pixie (played by Zoe Colletti). She was like the Joker of Elfhelm — saying that she likes to blow people's heads up just to watch them explode (I told you it would get dark). She was very funny and I definitely could've used more of her. But at least she gets a great payoff at the end.

What makes it terrible: My biggest complaint? Not enough funny Kristen Wiig. They were only starting to make her Aunt Carlotta character somewhat memorable and then Nikolas runs off and we don't see her again until the very end of the movie. A bit of a missed opportunity to add some non-Stephen Merchant comic relief.

Beyond that, there's not much I didn't like. Did they rush the Christmas bits at the end? A bit, but with a 106 minute runtime — and plenty of good scenes not worth cutting preceding it — it was probably the right call to balance that the way they did. Did it get a bit darker than expected for a Christmas movie at times? Oh yeah, but in the end that was all worth it — and if the little kids Maggie Smith is babysitting can deal with stories about parents dying and the like, then I think we can too.

Overall, it is a Christmas movie worth your time, and it might have gotten a perfect score if not for the fact that I like "Klaus" juuuust a little bit more.

Rating: On a scale from a partridge in a pear tree to twelve drummers drumming, I give this eleven pipers piping.