The 12 Days of Netflix Christmas Movies: 'The Holiday Calendar'

Kat Graham stars in this film about a struggling photographer with a magic Advent calendar and a best friend who so desperately wants to be something more. 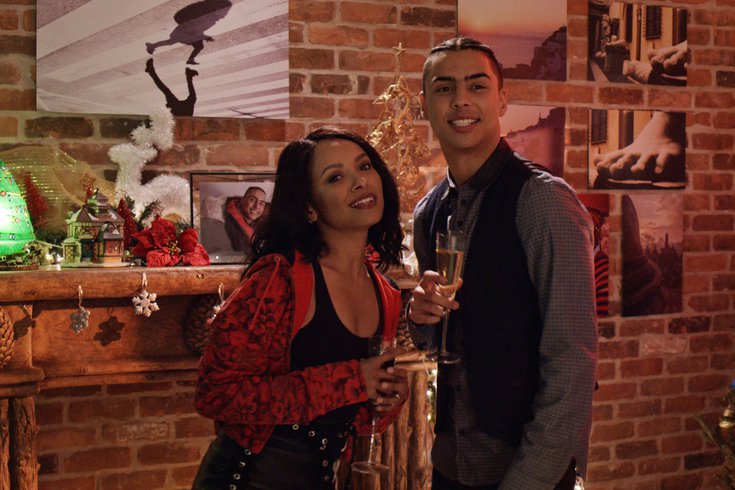 Kat Graham and Quincy Brown in "The Holiday Calendar."

Tweet-length review: "Gramps, that calendar’s just a calendar, right?" ... No. It's also a MacGuffin.

You might recognize: Kat Graham ("Vampire Diaries"); Ron Cephas Jones ("This Is Us," "Luke Cage")

The plot: While this may seem on the surface like a story about a woman named Abby (Graham) struggling to find her place in the world around the holidays, it turns out to actually be about a man named Josh (Quincy Brown) going to great lengths to get out of the friend-zone after being pushed aside for a douchey doctor (Ethan Peck). Oh, and there's a magic calendar that only serves one real purpose: expose Dr. Douche and bring the two main characters together (sort of).

And the ending of the movie is pretty apparent right from the start. You can see all the tropes of the "friends who could (read: should) be something more," even up to the point where Abby's family loves Josh maybe more than even their own daughter. Seriously, when Abby, a struggling photographer, comes to visit, everyone is just like, "Oh, hey, when are you going to get a real job?" Meanwhile, when Josh shows up a few minutes later, everyone drops what they're doing, runs over to hug him and makes a big deal of him just getting back from a backpacking trip across Europe where he was ... writing a travel blog? I guess if it's not your own kid, you don't care as much.

[On a related note, I was starting to feel bad for Josh. Like, why are you spending all this time around the holidays with another family? Where's your family? Did some tragedy happen that we're not going to find out about until the end of the movie? Spoiler alert: They just live in Florida and he eventually goes to visit them — but not over Christmas? Anyway...]

Early in the movie, just over five minutes in, we get our first glimpse of the title character, the Holiday Calendar™️, which is actually just a wooden Advent calendar that Abby's grandfather, affectionately known as Gramps because the writers didn't bother giving him a real name, gives her as a gift. And guess what? It's magic!

Will it bring Josh and Abby together? Will it lead her into the arms of another man? Or because it's a Netflix Christmas movie should we not even be asking those questions in the first place?

What makes it terrible: Before we get into the actual "magic" "powers" of the calendar (and, yes, both those words belong in quotes), we have a few questions. Why now? Why has nobody in the family known that Gramps is holding a magic calendar? Has he let other people use it? Or has he been keeping it all to himself? He claims to have recently found it and that it belonged to Abby's late grandmother, and that she wanted her granddaughter to have it. There's also an implication that the calendar is the reason Gramps and his late wife got together in the first place. "She bought it just before we met at a little shop in Paris," he explains.

So, wait, you expect me to believe that you had a magic calendar all this time and just left it in a box somewhere to the point where you didn't even know where it was until you were packing up your old house? Gramps, what are you doing, man?!

Anyway, Abby gets the calendar but naturally doesn't know it has powers, because why would her grandfather warn her about that. Wouldn't it be better not to tell her and then let her think someone broke into her house and was playing with it while she was sleeping? Because that's what it would feel like if you went to bed with an advent calendar (one that wouldn't open) on your coffee table and then woke up the next morning not only with the correct door open, but with a glowing light behind the ornament of the day.

It starts off innocent. On Day 1, the calendar presents a pair of boots. At lunch, Josh gives her a pair of boots he bought for her in Italy while backpacking across Europe. The next day, it's a Christmas tree that leads to her getting in a car accident that's actually just a meet-cute with one of the most unlikeable characters you'll ever come across: Dr. Douche (Ethan Peck).

Dr. Douche (not his real name) is actually a divorced parent at Abby's niece's school and they meet again the next day at the Christmas pageant after the calendar gifts her a nutcracker, the same costume as Dr. Douche's daughter. It's also worth pointing out that their first date scene is about as cringe-worthy as it gets. And later, there's a montage of them going on dates that looks like it's pulled straight from the PA Lottery's legendary 12 Days of Christmas commercial (🎶FIVE CASH FIVESSSSS 🎶).

The real magic of the calendar, however, is not in any of the gifts is provides or meet-cutes it predicts, but actually in the fact that it exposes Dr. Douche after he takes her to a soup kitchen only for her to find out from some of the regulars that's one of his go-to moves to impress the ladies. Ew. (Naturally, that revelation was also predicted by the calendar). And after Abby calls out the doctor and explains the calendar to him — at which point he has the normal human response of looking at her like she's crazy and trying to talk some sense into her — she breaks up with him and throws the calendar out.

An ensuing falling out with Josh and problems at work — namely getting fired — Abby seems lost again. Suddenly, however, the calendar reappears on her doorstep. Could there still be time for love? We're only 70 minutes into this movie, so you bet your ass there is.

Anyway, if that reads more like a plot description than a list of reasons why the movie was bad, consider it might be the plot that was the problem in the first place. That, and a magic calendar whose only real power was the ability to give vague clues about something that was likely already going to happen in the first place. Cool?

What makes it good: The plot twist in the final 30 minutes of the movie — but we'll leave out what exactly that is. Sure, it wasn't exactly difficult to see coming, but they did a half decent job of planting a few non-obvious seeds that actually make the whole thing make sense.

And although I ripped apart the general premise of the movie above, there was one other thing about it that I appreciated as a viewer. Abby figures out the calendar is predicting the future on, like, Day 3. It would've been super annoying if they tried to convince us the entire time that she didn't realize what was going on.

And that brings me to the most redeeming part of this movie, Kat Graham. I wasn't very familiar with her work on "The Vampire Diaries" — I've never seen an episode of that show — but she came across as incredibly likeable and was one of the better actors in the movie, in my opinion. And for movies like this, being likeable is half the battle.

Rating: Five Golden Rings, which isn't nearly as good as it sounds considering I'm grading on a scale from a partridge in a pear tree to 12 drummers drumming.