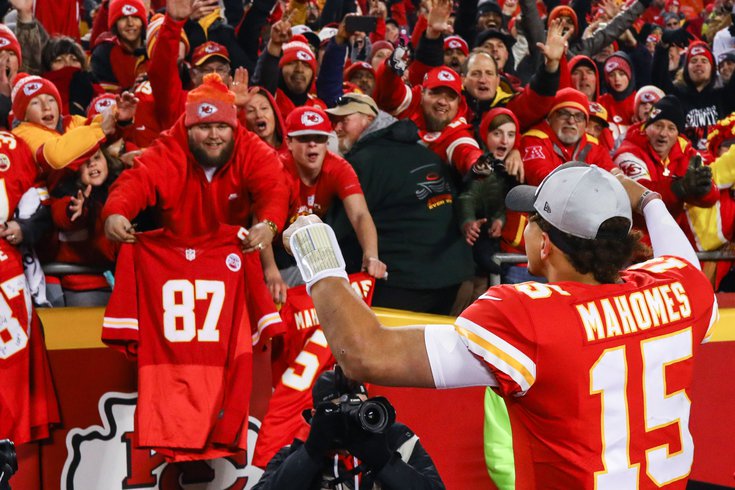 Could another celebration be in store for Patrick Mahomes and the Chiefs?

The start of the 2020 NFL season begins tonight, so it's time to lay out our predictions on who will be good, who will be bad, who will win the Super Bowl, and which individual players will shine.

1) Saints: You can pretty much always count on New Orleans to have a top 5 offense, and that'll be no different this year. They're just a safe pick to put in the 1 spot, so I won't look like an idiot.

3) Vikings: Their defense has a chance to be really good again this season, and they have legitimate fire-power on offense. I wonder if some folks are sleeping a bit on Minny?

4) Cowboys: Way over-hyped, as always, but they'll be good enough to win a bad division.

5) Seahawks: They're just always there. Also, Russell Wilson is good.

6) Buccaneers: Ugh, I hate including them, but the NFC South has potentially two really bad teams in the Panthers and Falcons.

7) Eagles: The Eagles sneak in again at 9-7, but as usual, they'll be playing their best at the end of the season. It's hard to imagine that they won't have serious offensive line issues at some point this season.

2) Steelers: They maybe had the best defense in the NFL last year, and still went 8-8 with an absolutely horrendous quarterback sitch. I'd be surprised if they don't win double-digit games.

4) Colts: Philip Rivers could benefit from playing in that dome.

5) Ravens: I think two AFC North teams will have double-digit wins, but one of them is going to have to be the wildcard.

6) Titans: Old-school bruiser team that won't be particularly impressive in the regular season, but you don't want to have to play them in the playoffs.

7) Chargers: They burn me every year. I won't feel so bad if I only have them as the 7 seed.

1) Jaguars: Nobody wants to be there.

2) Panthers: At least they know what they are, I think? Their young players will get experience, which is good, but it'll be an ugly season.

3) Lions: I don't know how Matt Patricia is still employed.

4) Giants: I'm going to miss Dave Gettleman... a lot. Here's to hoping the Joe Judge era lasts longer than one season. Don't deprive us of that, football gods.

• Drew Brees, Saints, MVP: Brees has never won an MVP, surprisingly. He has been the runner-up three times. He also still puts up huge numbers, and voters might feel like they owe him a lifetime achievement MVP.

• Aaron Donald, Rams, Defensive Player of the Year: It's hard to justify projecting anyone to be better than Donald in any season.

• Clyde Edwards-Helaire, Chiefs, Offensive Rookie of the Year: I mean, there are some people picking this guy first overall in fantasy drafts. He's very likely to put up big numbers as a rookie in a Brian Westbrook-like role.

• Chase Young, Football Team, Defensive Rookie of the Year: Young has a chance to be dominant from Day 1.

• Cam Newton, Patri*ts, Comeback Player of the Year: I think we're going to see this season that it's not super hard to perform in the Patri*ts' offense, when there's so much cheating (both known and unknown) that is happening.

• Bruce Arians, Buccaneers, Coach of the Year: The Coach of the Year Award is usually mindless drivel, going to the coach of the team that had the biggest turnaround from one year to the next. In 2017, Doug Pederson was clearly a better coach than Sean McVay, but McVay took home those honors, for example. This feels like a Bruce Arians year, because (a) Arians is a good quote and some of my media brethren eat that nonsense up, and (b) folks are going to be slobbering all over Tampa, if they merely make the playoffs.