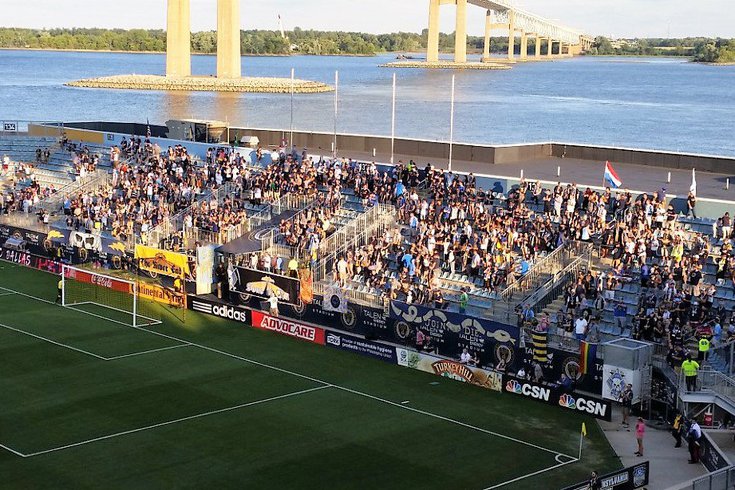 2SP's new pale ale, 'Here beFORe The Beer' plays off the Sons of Ben's slogan, 'Here Before The Team.'

Philadelphia Union fans will have a new beer to enjoy when the soccer team takes the pitch in the postseason this fall.

2SP Brewing, a craft brewer based in Aston, Delaware County, has partnered with the team's fan club, the Sons of Ben, on a new drink that celebrates the fan base's 13th anniversary.

The brew, named "Here beFORe The Beer," is a pale ale with a touch of caramel malt. It’s based on the group’s slogan, "Here Before The Team," which acknowledges the support that existed before Philadelphia had an MLS club.

The beer's name was coined by Sons of Ben member A.J. Serio.

The Man behind the name of "Here beFore The Beer" be sure to say hi at today's event at @2spbrewing! pic.twitter.com/rTr4Dmwjij

The limited-edition beer will be available at beer retailers across the Philly region beginning next week.

CAN RELEASE TOMORROW ⚽🟦💀🟨💀🟨💀🟦⚽ Here at 2SP, we're excited sponsors of The Sons of Ben, the proud supporter group of The Philadelphia Union Soccer Club. Beyond their rabid support of the Union, The Sons of Ben aims to support & develop soccer in the Delaware Valley and give back to the community, specifically in the city of Chester, where the Philadelphia Union play. ⚽ The two of us came together to commemorate The Sons of Ben’s 13th anniversary with their official beer, Here beFORe the Beer Pale Ale - a piney, esthery pale ale with a touch of caramel malt to make it a perfect balance for the fall weather. At 5% alcohol it is just the perfect beer to enjoy watching 90minutes of soccer from one of the top teams in the country, The Philadelphia Union. ⚽ The name Here beFORe the Beer was the brainchild of Sons of Ben member, AJ Seiro. This is a fun twist on their slogan, “here before the team,” which has been used to celebrate the supporter group’s founding 3 years prior to the Union’s first season! 🍻⚽🍻 You can find this in our can fridge starting tomorrow - can't wait that long? Get a sneak preview and the tasting room today on draft! #2spbrewing #madeindelco #drinklocal #philadelphiaunion #sonsofben

In 2014, Yards Brewing launched a seasonal beer, "Sons of Ben," described as "a rowdy pale ale," that honored the fan club. A bottled version became available in 2017.

The Union are tied with Toronto FC for first place in the Eastern Conference with one game remaining in the regular season. They play the New York Revolution Saturday at 3 p.m. at Subaru Park.