The Temple University grad has been able to expand her business, despite the ongoing pandemic 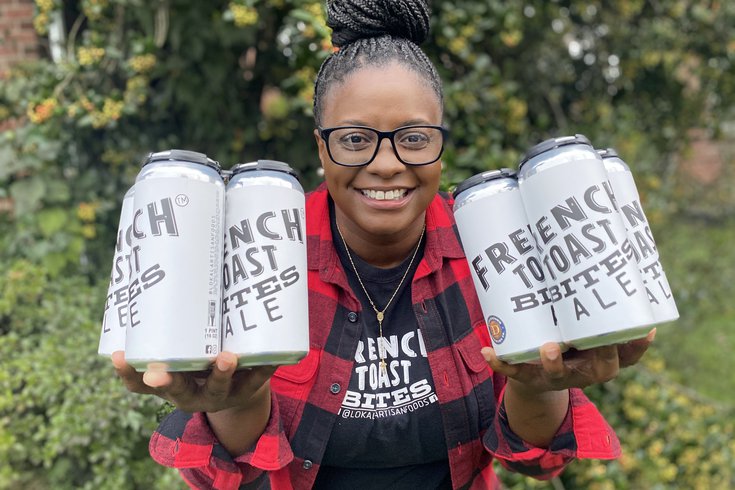 Charisse McGill of Lokal Artisan Foods is the first Black female in Pennsylvania to debut her own beer.

Charisse McGill, owner of Lokal Artisan Foods, known for its French Toast Bites, developed a beer with Doylestown Brewing Co. that goes on sale Friday afternoon. She's the first Black woman to create her own signature beer in Pennsylvania.

The 38-year-old entrepreneur is a Temple University alum and is currently one class away from graduating from St. Joseph's Haub School of Business with an MBA in Food Marketing.

McGill's 5.5% ABV brew is called French Toast Bites Ale. Its flavor is described as "sweet, smooth and toasted dessert."  The beer is available in four-packs of 16-ounce cans.

"We all can't sit around and hope to ride out the pandemic without investing the time, work, energy and passion," McGill said of her new business venture. "This is one of the largest pivots for me, and will shape the future direction of my company. I am excited and honored, and I can't wait for everyone to try this special beer we have created."

McGill started selling her artisan French toast at the Made in Philadelphia Holiday Market, which is curated and organized by Christmas Village organizers.

She sold about 6,000 orders of her French Toast Bites in a little less than 50 days, according to an article by The Philadelphia Tribune.

Her business really took off, however, in 2019 with the debut of her French Toast Spice. While she was securing shelf placement for the sweet seasoning, she continued to expand with the launch of a summer-long pop-up at Piazza Pod Park, the launch of a pilot program with Shop Rite and her debut at Made in America.

Then COVID-19 hit Philadelphia and events and festivals were canceled, so McGill was forced to change her plans for further growth in 2020.

Instead of giving up on her business, McGill became the first paid vendor on the Black-owned and operated Black and Mobile delivery service. She also became the first Black female operator at Spruce Street Harbor Park.

The buzz surrounding her stand at the Delaware River waterfront then led to a call from Doylestown Brewing Co.

The French Toast Bites Ale will be distributed through Muller, Inc. GoPuff also will deliver the brew in Philadelphia.

McGill will have limited supplies of the cans at upcoming events this fall and winter, as well. She'll be one of the vendors at Christmas Village at LOVE Park this holiday season.