Agent of 49ers running back Raheem Mostert: 'Philly was great to us' 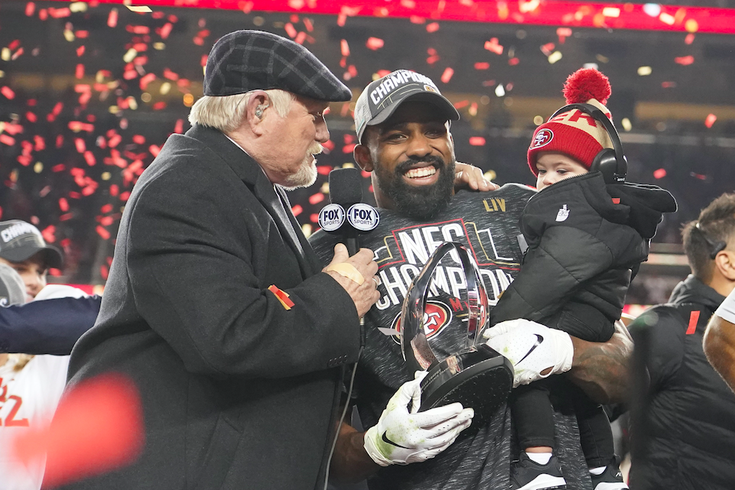 Raheem Mostert celebrates with the San Francisco 49ers after their 37-20 defeat of the Green Bay Packers in the NFC Championship Game. Mostert, who started his career in Philadelphia, rushed for 220 yards and four touchdowns to help send the 49ers to Super Bowl LIV.

San Francisco 49ers running back Raheem Mostert put on a show Sunday night, racking up 220 rushing yards and four touchdowns to punch a ticket to Super Bowl LIV against the Kansas City Chiefs.

In Philadelphia, most of the attention in the run-up to the Super Bowl will deservedly be on Andy Reid, who will get his second chance to hoist the elusive Lombardi Trophy.

But Mostert's show-stopping game is also significant here because there was a time he suited up for the Eagles, as many have bickered about on Twitter since Sunday's game.

@Eagles how do you guys keep letting talent get out the door. I don't care that 6 takes cut Mostert, we had him first and he had a great pre season. Just keep letting it go. Nice when you let Amendola go. Etc etc etc. Terrible evaluation. Let Scott sit. Smh

Raheem Mostert led the NFL in Preseason scrimmage yards in 2015 (351) and the Eagles cut him.

The Eagles cut Mostert, and then won a Super Bowl two years later, so it worked out okay. https://t.co/BSH2grpmIe

Mostert was signed by the Eagles in 2015 as an undrafted free agent. He had a strong preseason, got cut, spent some time on the practice squad and was ultimately released. Since then, he's bounced around to the Miami Dolphins, Baltimore Ravens, Cleveland Browns, New York Jets, Chicago Bears and finally landed with the 49ers in 2017.

In a year in which the Eagles relied on practice squad players to scrape their way into the playoffs, Mostert's perseverance is worthy of admiration.

Even after Mostert seemed to catch on in San Fran, he suffered a gruesome and nauseating forearm injury that ended his 2018-19 season. Another team might have given up on him, but Mostert was rewarded by the 49ers with a three-year, $8.7 million contract.

On Monday, after his huge NFC Championship Game, Mostert's agent responded to the buzz about his time in Philly.

It's funny all the messages I'm getting from Eagles fans today about how they should've kept my client Raheem Mostert. Philly was great to us and we have nothing but fond memories of starting our career there... It's the next five teams that may have some explaining to do.

Following Sunday's game, Mostert said that he continues to use his early-career struggles as motivation. Prior to each game with the 49ers, he looks at the cut dates of every team that let him go.

"Not everybody can deal with that type of stress and pain and agony that I went through, but I just kept the faith in not only myself, but whoever gave me the opportunity," Mostert said. "And this organization has done a great job with that."

Hall of Fame quarterback and FOX Sports broadcaster Terry Bradshaw joked with Mostert during the trophy presentation on Sunday night, saying he had never heard of him at the start of the season. He associated what little he did know with the composer Mozart.

Terry Bradshaw admits to Raheem Mostert he called him ‘Mose-art’ earlier in the day. Knows his name now obviously. pic.twitter.com/2wDzAYriWN

For a guy who could easily have given up on the NFL, Mostert showed why he belongs on Sunday night. Even if most of Philly will be cheering for Reid and the Chiefs, the silver lining of a 49ers win would be Mostert's incredible journey that started with a spot on the Eagles roster.