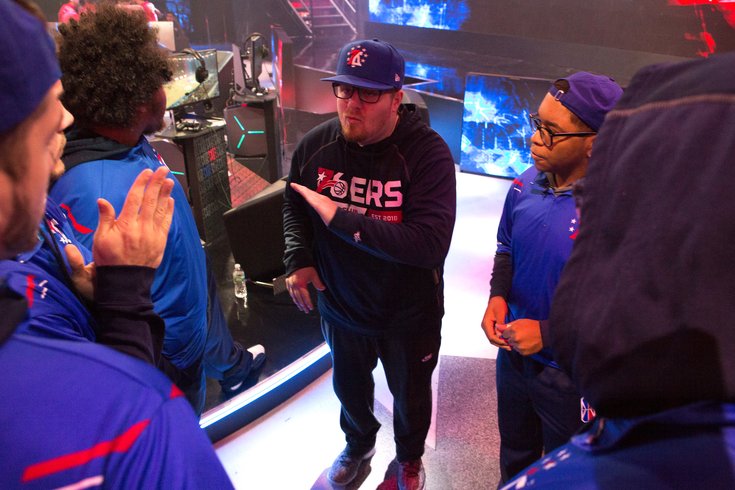 Coach Jeff Terrell talks to his team during a game.

The 76ers Gaming Club has signed coach Jeff Terrell to a multi-year contract extension following a successful inaugural campaign in the NBA 2K League, general manager Michael Lai announced on Tuesday. The deal will keep Terrell in Philadelphia through the 2021 season.

“I am excited to retain Jeff as our coach of the future,” Lai said in a press release. “Jeff’s dedication, open-mindedness and compassion have built a lasting culture of winning at 76ers GC without losing perspective on the importance of life outside of the game. I look forward to seeing the results of his work as we strive towards our ultimate goal of an NBA 2K League Championship.”

With Terrell at the helm, 76ers GC finished with a 10-4 record, good for second in the league. Furthermore, after being picked to finish near the bottom of the league following the draft, Terrell's team not only won the first of three in-season tournaments, but also made it all the way to the semi-finals, and became the first team in the league to score triple digits in a game.

“I would like to take this time to thank Harris Blitzer Sports & Entertainment for providing me the opportunity to coach this team during the inaugural season and I’m humbled by the confidence the organization has shown in me by providing a multi-year contract extension,” said Terrell. “My goal is to help establish the 76ers Gaming Club as the premier gaming club of the NBA 2K League and bring home a Championship. I am fortunate to have my family, friends and 76ers GC players and front office by my side in supporting that goal.”

Unlike most 2K League teams, the 76ers GC actually ran offensive sets and various plays throughout their games, something that helped separate them from the rest of the pack. And a big reason for that was Terrell, who was a collegiate point guard at Roane State and Murray State before an auto accident ended his playing career.

While on bed rest, Terrell fell in love with NBA 2K, quickly becoming one of the top amateur point guards on the gaming circuit. And in the years that followed his accident, Terrell also began coaching youth basketball, eventually graduating to the high school level in Oklahoma before joining the 76ers GC for its inaugural season.

The rest, as they say, is history.